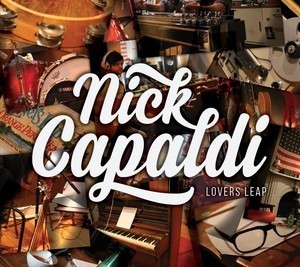 In 2013 UK singer-songwriter Nick Capaldi released his ‘Golden Summer‘ EP, a frighteningly mature work, worthy of a songwriter twice his age and experience. Not long after release, Nick started to talk of follow up plans involving a trip to Nashville. Those plans became a reality and in Nashville, he hooked up with legendary musician and producer Brendan Benson. The resultant four recordings, collected on 2015’s ‘Lovers Leap’ EP, felt like a long time coming, but were certainly worth the wait.

Naturally, something recorded in Nashville with members of Ryan Adams’s own Cardinals is likely to have a slight country bent, and so it is with ‘Ten To Midnight’, a tune that’s smoother and more reflective than anything else in the Capaldi cannon prior to his Stateside trip. A steady beat and stately piano line set the tone for a slightly maudlin heartwrencher; this, combined with a twangy guitar line that could have easily been culled from the Cardinals’ ‘Cold Roses’ really sets the mood. Capaldi’s high tenor style calls out with clarity, perhaps with a much less rootsy feel than such a tune would normally command, but he sounds at ease recounting a tale of loss and “the one she left behind”. Fleshing out everything, there’s a gentle riff and even gentler steel guitar (supplied by The Cardinals’ Jon Graboff). As a Cardinals fan, for Capaldi, recording this must’ve been like a dream come true, and the results do not disappoint. ‘I’m Here To See The Moonlight’ keeps a hold of the country flourishes – largely thanks to the steel guitar – but is a little chirpier in tone. Capaldi’s lead vocal has a bounce befitting the music, this time very much driven by Reno Bo’s simple but solid bassline. The interaction between bass and piano is constantly pleasing, but the addition of an almost psychedelic lead guitar in the right speaker channel absolutely makes this track – especially once an extended instrumental jam plays out towards the end. Hearing this, it’s kind of reminiscent of parts of Traffic’s classic ‘Shoot Out At The Fantasy Factory’ and enough to make the listener wonder which direction Capaldi’s music might take if he fancied cutting looser once in a while.

For those hoping for some of the power pop sparkle that dominated Nick’s previous releases, the Eps remaining pair of tunes will definitely entertain. ‘Everlost’ represents thoughtful retro pop and provides this EP with the most obvious link to previous works, though is by no means just a mere rehash. In the Nashville surroundings – and spurred on by his roll-call of guests – Capaldi sounds inspired and ready to take on all comers, with a natural delivery. The music, meanwhile, is well arranged, centring around a rigid bassline and loud ringing guitar, culminating in too brief organ swirls. In short, it’s great pop with a huge nod to the past. The clear standout, ‘Jealous Streak’ more than delivers, as the tune really thunders. A number that has Brendan Benson‘s stamp all over it, we hear a rumpty-tumpty beat that sounds like a retelling of ELO‘s ‘Mr Blue Sky’ with the punch and energy of an early Supergrass number. Naturally, Capaldi is absolutely in his element, throwing out each line with gusto, his voice adding strong melodies against stabbing piano lines and a pumped up bass. Due to his vocal tones, it often sounds more like a 90s retelling of 70s pop, but that shouldn’t detract from it’s brilliance. In terms of straight power pop with a clear Cheap Trick and Jeff Lynne overtone, it’s an instant classic.

For those already sold on Nick Capaldi and his brand of pop, ‘Lovers Leap’ shows more of his greatness as well as a glimpse into a potential new direction, while for those who’ve followed Brendan Benson or Ryan Adams and The Cardinals, this offers a welcome viewpoint into some extra curricular activities. Either way, it’s a win-win for both artist and listener, resulting in an essential release.