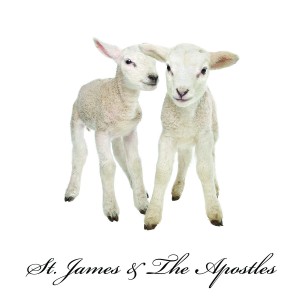 On ‘Via Delarosa’, the third release from Philadelphian blues rockers St. James & The Apostles, their heavy guitar and organ driven sound ensures plenty of old style chops are at the forefront of almost everything, allowing listeners with a retro ear a chance to really let their hair down.   In terms of grittiness, the analogue sound of this LP’s ten heavy rollers just couldn’t be improved: if you like music to have a live in the studio feel, then look no further…

To whet the appetite, The Apostles kick off with ‘Gimme Some’, a short and repetitive garage rocker that sounds like the fruits of a gospel choir adding their voices to Steppenwolf’s ‘Magic Carpet Ride’ and shaking themselves into a mini frenzy.  After that, the real fun begins…  Adopting a heavy riff with a full compliment of fuzz pedals, guitarist/vocalist Jamie Mahon leads ’90 Day Chip’ by bellowing his opening line “You’ve got a friend in Jesus / I don’t love you no more”, thus firmly setting out the band’s acid-drenched intents.   The heavy riffs again recall parts of Steppenwolf’s ouvre, but there are touches here and there reminiscent of the earliest Blue Oyster Cult, especially if their sound were cranked to the maximum.  The solid riff that paved the way at the start barely lets up, but between those guitar parts, occasional soul-drenched backing vocals and even more organ add plenty of musical colour.  On the upbeat ‘Shavonne’ their grooves hit hard like a collaboration between Skeletons In The Piano and The Dead Exs.  The bluesy guitar lines sound like they are set to dominate at first, but pretty soon it’s Kiker’s organ that steals the show once again as he slaps the keys with the manner of a man channelling Jimmy Smith’s demons. His funky fills provide a fantastic foil for the fuzzed up, overdriven guitar lines and in approximately four minutes the trio wind themselves into a late 60s frenzy with more sassiness than the likes of Vanilla Fudge could ever muster.  As the track shifts into its second phase – all heavy soloing – there’s a sense that if the band chose to stretch this into a full-scale ten minute freakout, it still wouldn’t outstay its welcome.

Slowing down a touch, ‘Rent Boy Blues’ is less flamboyant. A gravelly vocal and garage based riff are all that’s required to entertain here and the trio of musicians waste no time in tapping into a groove that’s pretty mean.  The keys take on a shrill tone to match – somewhere between classic Ray Manzarek and ? & The Mysterians – resulting in a succinct number that shows off most of the band’s talents in a slightly more accessible fashion. In keeping with the more basic sounds, ‘Paradise Slaves’ brings more of the same, only this time much heavier on the keys despite a hugely melodic lead guitar providing a chunk of the tune.  It’s another belter, this time tapping into an occasional call-and-response theme between the gravel-voiced frontman and an oddly distant Ang Bocca (making one of several appearances in the backing vox department).

A spooky blues stomper that’s akin to a Doors cast-off replayed by Nick Cave’s Grinderman, ‘’Til You’re Gone’ presents another definite highlight.  Any unsettling intents are increased by a huge amount of distortion with Mahon powering through every line affecting his gravel tones with a subtle but menacing croon – the wobble in his delivery only adding further to the energy within the performance.  While the rhythm section are top notch and the lead parts are suitably tough, it’s guest musician Dave Reis who steals the show here, with a deep harmonica riff that adds a melodic hook and an extra layer of interest – his contribution even outshining the hard keys.  The title cut grooves with echoing guitar before crawling into a dark corner via some rattled jazzy drums and a deep, deep tone on the bass pedals.  In terms of vocals, this is an absolutely essential track showcasing a smooth croon that’s equal parts Jim Morrison and Mark Lanegan.  As good as the voice may be, that guitars are not to be outdone – knowing they’re onto a great thing, the band ensure the opening riff is called upon to return throughout.  Combined with more organ fills, this darkest side of The Apostles is absolutely captivating.

It’s not all hard grooves and feelings of late 60s paranoia and despair, however.  Attempting something lighter, ‘It’s a Shame’ flaunts a Ronettes drum beat and earlier sixties sound.  A low-key approach is made even woozier via a country tinged steel guitar played by Kiker, whom also adds a warmth with a more few bass pedals.  The lead vocal, meanwhile, is aching rather than angry and although not in keeping with Mahon’s more atypical approach, it’s a strong performance made all the more interesting thanks to a brief flirtation with a phased effect for that all-important sixties vibe.

The album closes with an epic double whammy. ‘Cool Your Tongue’ brings a crashing chord and droning keys for almost two minutes, the claustrophobia cranked to the maximum thanks to the addition of a dripping water sound and a man whacking a cymbal.  At the point where its atonal nature borders on the unbearable, ‘Lazarus’ rises from within, taking those keys and wrapping them around a sermon of darkness. Growled vocals deliver their mantra across the better part of seven minutes while the guitars settle somewhere between distorted blues tones and the spaced out stoner vibes of New Jersey’s Butchers of Sky Valley.  It may be the least accessible of The Apostle’s numbers this time out, but its intensity ensures it holds its own.

This is a seriously good record.  Like a forty minute jam between members The Doors, Steppenwolf, Mountain and Big Brother & The Holding Company, ‘Via Delerosa’ presents some of the best sixties-inspired, heady grooves you’re likely to hear – at least without the aid of a time machine and access to a vault of lost tapes by an undiscovered musical cult.  Grab it now…you won’t be sorry.