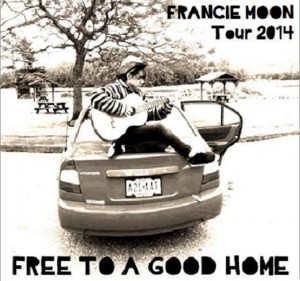 Following a self-released digital EP in 2013 and split cassette with Darkwing in the first half of 2014, ‘Free To a Good Home’ brings more previously unreleased music from New Jersey’s Francie Moon (aka Melissa Lucciola).  Released to tie in with a summer tour – and acting as a stopgap before the appearance of ‘Glass House’, a studio recorded four track 7” – its seven recordings are very DIY in origin, but there are still times where they provide an excellent example of the performer’s talents.

Before we get to the best reasons to check out this release, let’s quickly toss aside the weaker tracks.  Both ‘Figure It Out’ and ‘Starts at The Bay’ are particularly hard on the ears.  Two numbers recorded live to cassette at home, they have the homespun charm of something from Robert Pollard’s fabled suitcase, but the loudness of the vocals on each make tracks these so, so hard to listen to.  On ‘Starts At The Bay’ in particular, the vocals are shrill and distorted – sure, you can’t ignore them, but the overall volume  just hurts after a while.  Sequenced as this EP’s opening track, it’s likely the artist is really testing the unsuspecting audience in a way that says “you make it past this, you’ll love me”, thus singlehandedly weeding out the less patient.  ‘Figure It Out’ is a little more palatable, but this track is marred somewhat by having a vocal that sounds like a Joanna Newsom performance being delivered through a public address system. The fact that the recording techniques makes the tuning sound odd really doesn’t help either of these acoustic numbers in the long run.

Moving on swiftly, the rest of the EP shows off a selection of influences from beatnik cool to frantic rockabilly revival – all via some scary, lo-fi garage blues.  That beatnik vibe is at its most forthright during ‘Walk Around’, an understated tune with almost bongo-like, cymbal free percussion providing a strong backline.  At it’s heart, there are acoustic strums with a slightly reverbed vocal sound, while further distortion is employed by electric guitar flourishes demonstrating a wide stereophonic split.  Much darker, ‘If I Die’ threatens the listener with a slow, foreboding arrangement.  With the distorted guitars pushed to the fore and extra vocal effects employed on every word, there’s nothing clean here whatsoever.  It’s simplicity is the key, in that what what the listener hears within the first thirty seconds barely changes over the course of the remainder… If that kind of doomy approach appeals, then there’s much to love on this pair of numbers – particularly for fans of Gemma  Ray (perhaps if she were shouting through a megaphone).

With an echoing drum and walking bassline, ‘So This Is The Life’ is this release’s most melodic affair – it’s quasi-maudlin delivery finding the vocals crooning a little more, allowing more emotion to take centre stage.  That voice, solemn and slightly cracked as it is, allows more of a naturalistic sound, but it’s the lead guitar work throughout that makes this tune a particular winner – well played throughout, with an abundance of sounds that come across like a slightly lo-fi Chris Isaak recording. Stepping up a few gears, ‘I Like It’ is a rough and ready rockabilly tune allowing for both frenzied vocals and a band that really lets loose.  The jangle of the guitars and the turbulent pace create plenty of excitement, but it’s the inclusion of a heavily treated vocal –  yes, there more than a smattering of distortion again – that really makes this an edgy workout.  The dull as dishwater Imelda May should take notes…or just go away quietly and know when she’s beaten [the latter is the easiest option].  On the laid back ‘It Takes Time’, another spooky streak with plenty of echo provides a great basis for jazzy guitar lines.  This surprisingly soft and percussion-less arena gives the vocal performance very little to rest against, but at the same time, the guitar strums are perfect for the job in hand and the repeated refrain of “it don’t matter at all” echoes in the ears long after the number has long ended.

Those looking for accessible performances and anything resembling a glossy finish will surely be left wanting, but for those who crave DIY sounds and have a passing fancy for fifties kitsch may find a musical kinship.  Plenty of attitude coupled with the kind of sonic (dis)harmony championed by the likes of Matt Verta-Ray ensures this EP brings a few notable performances.