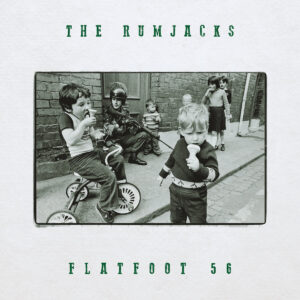 Split EPs are often a good way to discover a couple of new bands, and with six songs presented in a no-frills manner, this shared release between Celtic punks The Rumjacks and Flatfoot 96 is no exception. Both bands take a relatively straight, no nonsense approach to their subgenre, and that means that – in the main – most people will either love or hate them.

Looking at The Rumjacks’ tracks first, each one is carries a solid sound, but none ever feel genuinely ground breaking in any way. Their lead track ‘Whitecaps’ kicks off with a crashy riff, before dropping into a repetitive punky groove, where the guitars almost adopt a relentless buzzsaw effect. The chords appear to change infrequently, but the music is kept buoyant thanks to a really well structured bassline. The main feature comes from a rowdy vocal where gang shouting takes precedence over everything else but, naturally, the stylistic choice is perfect for the anti-racism message. The stark warning of “whitecaps coming over the horizon” is simple and direct, ensuring the core ofIt the track is superb, and as such, the arrival of a belated verse feels anti-climactic. almost approaches the material in a spoken word way – a far cry from the expected Tim Armstrong-esque sneer it could have had – and by quickly dropping back into the main refrain with little to no musical embellishment, it gives the feeling of something suffering from a really knocked out, hurried send off. If you expect little more than a massive riff coupled with a rousing and almost sloganeering chant, it’s more than fine, but it isn’t anywhere near as smart as The Rumjacks think it is.

‘Fifth Wind Firestorm’ is very obviously derived from ‘Rum, Sodomy & The Lash’ era Pogues, being a high octane jig peppered with Irish whistle and banjo aplenty. Looking past the obvious influence, though, it’s actually far preferable to The Pogues, since the gruff vocal is genuinely audible, and the music has a much tighter feel. The speed at which it attacks makes the finer points of the message a little hard to decipher on first listen, but the playing is immense and the heartfelt qualities of the gang vocals throughout are perfectly pitched. It’s so wordy, there isn’t really time for a massive solo or any flashy twists, but in terms of being the kind of track that’ll get a live audience moving, it’s perfect. After upping the ante and suggesting The Rumjacks are capable of bringing something fantastic to finish, ‘What Was Your Name In The States’ misses the mark by shifting too far into the Irish folk tradition. There’s much less of a driving feel within the riffs, and the rousing vocals and spaces filled by hearty cheers feel really genuinely forced, as if the band are playing to expectations rather than doing what comes naturally. Again, there are moments that work musically – the banjo is perfectly pitched and the drumming keeps everything buoyant – but, in the main, folk-punk has rarely felt this fake since Skinny Lister arrived and threw themselves onto an obvious bandwagon in the late noughties.

Despite The Rumjacks turning in a couple of very solid sounding tracks, they lose a lot of goodwill due to ‘What Was Your Name…’, and so, are outshone by the underdogs when it comes to this split. Flatfoot 56 really have the edge when it comes to both a crunchy punk melody and a knack for a massive, crowd-baiting hook or two, even with The Rumjacks’ ‘Whitecaps’ opting for maximum volume and simplicity. On their opening number, ‘Mud’, Flatfoot 56 are in much less of a hurry to make an impression. Taking a full five minutes to introduce the band, the track opens with a quiet and repetitive riff, where a clean toned guitar and accordion sound hint at folky traditions, before buzzing guitars and crashing drums take a punky stance, creating a musical marriage between the two styles with ease. Rather than taking the obvious Dropkicks route, there’s a humanity here that occasionally hints at Joe Strummer works and the personal narratives of the much loved Frank Turner. That would be enough to sustain a great track, but due to some superior and smart musicianship, the track takes a dogleg to introduce a muted riff, a lead bass and a different kind of tension, before exploding into a barrage of whoahs. Overall, despite being quite a slow burner, in terms of musical tightness, variety and even a melodic stance, this is very much this split’s highlight.

Going further into the Dropkicks styled punk, ‘Sorry’ combines a jagged guitar with an accompaniment from bagpipes, quickly introducing the kind of pogo-worthy riff that’s often at the core of the Celtic punk subgenre. It takes all of fifteen seconds before this track’s gruffer qualities seem set to win the hearts of most, and with a much clearer vocal at play, Flatfoot’s marriage of Celtic punk and the strains of classic Face To Face has a really strong appeal. If the opening riffs don’t grab you, the chorus almost certainly will with its gruff, multi-voiced approach, oddly sounding as if it’s been drafted from an old Mighty Mighty Bosstones tune. Overall, ‘Sorry’ represents three minutes of great punk with a Celtic undertone, rather than the Celtic angle being the dominant force – and it’s all the better for that. Rounding out the Flatfoot numbers, ‘Trouble’ is much shorter, bigger on the bagpipes, and with a folky element lifting moments of taut punk, it further shows a band capable of taking their Celtic tinged sound to far bigger audiences. This number’s combination of gang vocals, solid drumming and almost Gaslight Anthem-esque blue collar chorus creates a rather varied sound within two and a half minutes, but due to the band employing a genuine focus, the coming together of styles never feels in any way cluttered. With a very familiar melody at the heart of the chorus, too, it has all the makings of a genre classic.

The Rumjacks mightn’t be anything out of the ordinary, but this split maintains a solid presence for them with a couple of tracks worth hearing. For Flatfoot 56, a band with a little less of a track record at the time of release, it provides a far more important showcase. Their material is really sharp – the sound of a band on the rise, with some brilliant songs that really need to be on people’s radars. The big booted, rough edged, often aggressive but unity focused Celtic punk thing isn’t for everyone, but if you’re even halfway interested in the subgenre, you owe it to yourself to check this out.