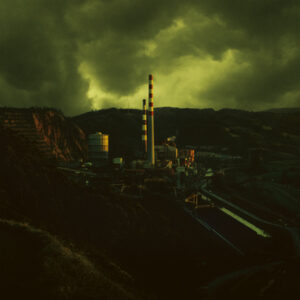 In many ways, their eagerly awaited 2022 release ‘Hex’ offers more of the same, but the melodies lurking within the core of the album are stronger than ever. This is immediately obvious during the first part of ‘El Odio’ – a three part suite – when guitarist David Lopez covers the bulk of the first three minutes with a huge riff that’s almost cinematic. There are moments during the main melody that call back to ‘Vortex’, but a slightly more commercial sound also seems reminiscent of Collapse Under The Empire with its extensive use of crying leads. Once this has been firmly embedded, the band switch gears and hammer into one of their heaviest riffs to date, with drummer Alex Perez delivering some really angry rhythms. There’s plenty within the hard groove and atonal guitar work that actually sounds like the more forthright moments from ‘Gish’ era Smashing Pumpkins, but without losing too much of Toundra’s huge identity. The main riff shifts back and forth between semi-pneumatic rhythms and angular melodies, and eventually, settles upon a lengthy passage where shrill, almost mangled lead guitars ascend against the heaviness whilst a second guitar throws out piercing, cleaner sounds. Although always easily labelled as prime post rock, it has a definite – and defiant – prog rock core. Changing the mood again, for sparse, almost cold interplay between guitar and bass, things eventually settle into more of a standard post rock mood, but despite a certain familiarity, fans of the band’s previous works certainly won’t ever feel as if this is lightweight, or the work of a band merely coasting in any way.

Into the second part of the epic, Lopez delivers some unexpected 90s indie jangle, but this is by no means a cop-out or a pathway to basic shoegaze; it’s merely a cold blanket upon which the rest of the band build a brilliant melody. The rhythmic core draws from A Perfect Circle; the bleak heart, from a basic post rock soundscape, but between clean toned guitar work and almost tribal, cymbal-free drumming, there are echoes of Paint The Sky Red which is more than enough to draw in the listener. That barely finds its feet before Toundra crash into a heavy, alternative/prog hybrid that showcases a superb union between Lopez and second guitarist Esteban Giron – the two musicians locking into a classic post rock chug, subsequently allowing the rhythm section to drive the heaviness towards a post-hardcore artiness before Giron layers everything with a sharp lead. For fans of the style, this will certainly provide one of the album’s highlights. Quickly adopting an even more interesting mood, Toundra then crash through a selection of riffs with a slight Tool influence and a whole lot more that calls back to Maybeshewill and a heavier take on the sounds of Verticals. Eventually falling into a more melodic groove where Alberto Tocadas’s bass rises and falls between cold guitar lines and a wall of shimmering sound, the melody steers the band towards a more jazz rock influenced direction, but in retaining parts of the heaviness, there’s still plenty for most post rock lovers to enjoy. The third and final chapter sounds, at first, as if it’ll be really difficult. By using repetitive riffs and cold bursts of noise in a way that seems to go on forever, it seems to offset almost all of the melodies that have gone before. However, if you can make it through almost three minutes’ worth of really oppressive noise, the riffs push on to deliver another great slab of louder post rock, this time with an almost Eastern influence informing the main melody. In many ways, it’s the closest ‘Hex’ comes to playing things safe, but in opting for the more tried and tested in terms of riffs, the contrast with the more difficult elements is certainly welcome. In terms of a “trad” post rock style, it’s pretty much flawless, with elements of Toundra’s past rubbing shoulders with the present, whilst displaying an obvious love for the genre’s earlier pioneers. Finally, by descending into sparse, clean riffs and a tune with a more wandering nature, the number closes with a mood – and this really has been about moods, above all else – it allows the listener time to reflect before moving on.

The album’s second half is constructed from four shorter pieces, but their concise approach in no way makes them inferior. There’s an old trope within prog fan circles that suggests “long = automatically brilliant or superior”, but this isn’t always the case, and Toundra’s shorter workouts offer just as much in the way of riffs and moods, especially with ‘Ruinas’ wasting no time in tapping into a classic post rock sound. Mechanical rhythms underscore an echoing guitar part, before the whole band settle into a groove that is very much an equal to their past achievements. With a time signature that shifts against the heavier sounds, faint echoes of Oceansize live beneath a classic Toundra groove, and moving into the meat of the arrangement, a very alt-rock approach to a post-metal sound offers a superb grounding over which some crying lead guitar delivers the biggest musical hooks. A final move into more jagged prog metal sounds pushes the drums forth and Perez drops a couple of superb fills into the main riff, before settling down once more to allow twin guitars to weave in and out of the punchy groove. There’s plenty here that could be easily written off as standard post rock, but hearing these guys working together – occasionally pulling in different directions and yet working towards a common musical goal – it’s really adventurous. What’s more, it all sounds so effortless and natural.

‘La Larga Marcha’ is a little more succinct, but still offers plenty of interest throughout. Opening with muted guitar sounds played on a loop, the band quickly evoke the best tunes from the short-lived Cities, before introducing a few louder elements driven by a fat bass. With the melody gradually building, it soon suggests there’s something big on the horizon, and sure enough, a massive metal-edged crunch lends a genuine climax before the whole process repeats. On the second go around, the guitar tones sound just a little more post-centric, with a buzzing edge that hints at vaguely alternative influences, before a busy drum part drops the band somewhere between the melodic bits of peak Tool and Red Sparowes. ‘Watt’, meanwhile, fills a confident eight minutes, first with a slightly lop-sided melody, working a very mournful riff and then a pounding post-rock sound that draws as much from heavier indie rock as the usual prog metal. The crashier approach throws drummer Alex in the spotlight once more, often showing how his punchy style acts as a driving force behind the twin guitars, and then, just as you think you’ve got everything sussed, everything takes a massive dog-leg to make way for some ugly baritone sax accompaniment. The addition of wonky brass is bound to remind many of some of King Crimson’s 70s work, or maybe something buried deep within a Soft Machine history, but its very much in keeping with the rest of Toundra’s soundscapes. In terms of branching out, it’s great, and by the time the band returns to another massive riff drawing from alt-metal, they truly sound like an unstoppable force. Finally, ensuring there’s a more melodic hook, a final passage introduces clean guitar work against an almost waltzing time-sig, sounding not a million miles away from a deep cut by The Fierce And The Dead.

In closing, ‘FIN’ is absolutely gorgeous. Casting aside all angular noise, heavy riffs and larger post rock tropes, the band offer something that’s a little closer to sounding like part of a film score. Shimmering guitar lines fill four minutes with a soft, repetitious melody, over which an echoing lead drops something akin to a prog rock inspired Mark Knopfler hook. That’s great, but it’s the swirling melody beneath that truly makes the piece, with Perez offering quiet, simple piano sounds that hark back to the early/mid 80s – and specifically The Edge’s unfussy keyboard hooks on early U2 recordings. It shows how, for all of their grandness and complexity, this band always has a strong feeling for melody that really helps this album stand up to repeated listening.

Between its proggy moods, wandering soundscapes and occasional forays into something even bleaker, ‘Hex’ is a hugely confident work and a really fine addition to Toundra catalogue. By crossing many musical boundaries, and paying homage to various post rock acts in their own way – both of the heavier and more soundtrack oriented persuasion – the band manages to build upon their own legacy and identity and create something special in the name of sprawling experimentation. Whether you’re already familiar with their earlier work or coming to Toundra with brand new ears, ‘Hex’ offers plenty in which you could easily lose yourself. A highly recommended disc.