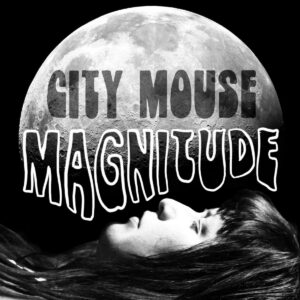 Finally, some thirteen years after City Mouse first emerged, their full length debut was finally released into the wild. Boasting an energetic half hour’s worth of sharp, classic, melodic punk with a strong Ramones-esque undertone, its barrage of speed driven riffs and sassy vocal (courtesy of City Mouse mainstay Miski Dee Rodriguez) was everything fans could’ve hoped for. A semi-timely follow up (‘Spits N Tramps’) brought more of the same, firmly making up for those huge gaps between recorded output in the past.

Amid a global pandemic, 2021 was a relatively busy year for Miski. She first popped up in a fairly unlikely place, providing backing vocals on the excellent Indonesian Junk LP ‘Living In A Nightmare’, but also found time to record new City Mouse material for a planned new album. Ahead of the album itself, the band’s much anticipated EP ‘Magnitude’ provides a great reminder – if, indeed, one were needed – of City Mouse’s classic US-derived punk sounds and of a band that deserves so much more attention. The title track crashes in with a hugely melodic vocal and its clean toned “woo-ooh” doesn’t even give the listener the grace of an intro to warm up. By going straight in with the big guns, Miski already has your attention before ploughing head first into a grubby riff that mixes classic Ramones tropes with the dirty rock and roll of Indonesian Junk. The bar room rock elements are further accentuated by a pleasingly raucous lead guitar underscoring the main hook that’s howled through the second part of the track. Overall, it feels a little less punky than some of the tunes on the 2011 EP, but none the worse for that; it’s great to hear the band pushing forward, and Dee’s slightly husky voice actually sounds more distinctive with those passing years. ‘Sweet Heart’ keeps up the energy with a full compliment of buzzing chords and the kind of vocal that really shows off the retro angle of the City Mouse sound. Via a full bodied performance, Dee soars and swoops, with the slight trill in her delivery really lending everything a lift. Musically, it’s not flashy, but between the strident chords and a huge, ringing lead guitar break, extant fans will find much to love.

Stretching out to a full four minutes, an inspired cover of Thin Lizzy’s ‘Get Out of Here’ tempers the punk pop with with a power pop edge, miraculously without losing the distinctive core of the original cut. This recording shows how Lynott’s brilliantly melodic heart can never be kept down and how the best Thin Lizzy tunes retain a malleable quality that’s easily shifted between genres. A dual vocal shows a lot of muscle, with Dee showcasing a street tough angle that would make Philo proud. The guitar solos, meanwhile, are a different story: for reasons unknown – likely deliberate – most of the aggressive guitar work is mangled and off-key. It’s jarring and challenging style threatens to derail everything, but it’s to a great song’s eternal credit that by the time the chorus returns and encourages you to sing, you quickly forget about any musical missteps.

Short and sharp, but also superb, this three track release adds something very exciting to City Mouse’s slowly growing catalogue. Its hard edged mix of punk, rock ‘n’ roll and high octane garage sounds are confident and commercial enough to appeal to a broad spectrum of garage punk/pop punk fans, and its biggest hooks are glorious. New music from City Mouse is always a welcome thing, but ‘Magnitude’ promises even greater things in the not too distant future.