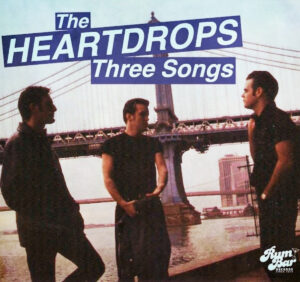 An instant standout, ’95’ kicks off with a sharp edged riff and semi-shouted vocal reminiscent of Lars Frederiksen’s works with Rancid, but quickly proves to be more than a quick punky knockabout. When the riffs swell to include more of a punk ‘n’ roll edge, The Heartdrops’ sound shows off hints of The Humpers and The Peawees without sounding like a direct copy of either. Hitting the chorus, everything drops into some relatively melodic punk, adding street tough harmonies to an already great performance, before linking the musical elements with a superbly executed, muted guitar riff that chops back and forth further accentuating the band’s love of hard edged rock ‘n’ roll. The music’s solid, but if anything makes this a potential classic of the style, it is Chris Clay’s strong vocal performance. At all times, he presents himself with the utmost confidence; a man who understands the importance of a forthright presence, and yet knows how far to pull back in order for that to never sound threatening, and retain enough melody to give the number a broader appeal than some of its closer variants might have. A few spins will get this tune firmly under your skin, but it’s merely a warm-up compared to the faster, buzzing ‘Truth Comes Around’ with its brilliant blend of grubby punk noise on loan from early Swingin’ Utters injected with the more melodic elements of classic Face To Face. It’s definitely more punk oriented than ‘’95’, but that brings its own charm. During these hard and fast two minutes, the listener gets a better listen to Ben Rosenthal’s crashy approach to the drum kit, whilst his injection of gang vocals during the climax help drive the speedy punk rock sound into more of a street punk sphere. All of those great elements result in the kind of tune that sounds brilliant with the volume cranked.

Stretching out a little, ‘Wrong’ takes a little more from a “UK punk” influence with a world of riffs that recall old Sham 69 tunes (but played better) and a hint of British revivalists The Terraces. Clay’s guitars dominate and spend the whole track throwing out overdriven chords as if they’re going out of fashion, but those paying closer attention will certainly pick up on a fine – if a little rigid – bassline courtesy of Luke Metz. Although the music isn’t complex and doesn’t stretch The Heartdrops’ talents any more than the other tracks, the extended playing time is put to good use as they hammer home a one-word hook, managing to do so without it ever seeming lazy. In terms of punk-oriented singalongs, this still stands as a gem in the band’s all too short catalogue.

Chances are, you missed The Heartdrops back in the 90s. This digital EP is the perfect primer; a short yet effective introduction that shows that, just maybe, The Heartdrops were one of those bands that didn’t break through due to the punk scene being a little over-subscribed. It definitely wasn’t due to a lack of talent or song writing chops. Free music is always cool, but this is a gratis download you really can’t afford to miss.