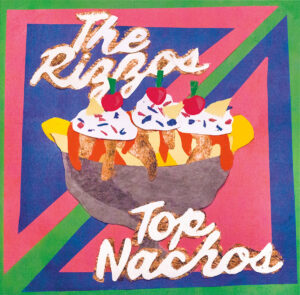 Following on from their 2017 EP ‘No Parents, No Rules: Beneath The Planet of No Rules’, The Rizzos’ contributions to this power pop split are their best recordings to date. The two minute jangle fest of ‘Bless This Mess’ casts a melodic ear back to the 90s and bands like Stretch Princess, only in true Rizzos tradition, the poppier hooks are buried in a fine garage rock sound. It’s obvious right from the opening notes that it’ll be special as Justin unveils a huge funk-oriented bass part that suggests the band have really grown over the previous couple of years. With Megan’s heavy jangle topping that, a more traditional Rizzos sound quickly takes a hold and by the first chorus there’s a feeling of hearing something special. The expected noisier traits fill a chorus when Megan and second guitarist Joshua Park reach for the distortion pedals and Bettina smashes the hell out her drum kit. The spirit of the 90s lives on…and this becomes even more obvious with yhe self-explanatory ’90s Song’. It isn’t as instant as ‘Bless’, but it’s definitely another track where you can feel The Rizzos just feeling more comfortable in their own musical bubble. It kicks off with another very melodic edge with a very 60s inspired garage rock jangle underscored by a fat bass and there’s further proof that The Rizzos have really matured, especially once Meg curls throws a very girl group influenced vocal into the mix. It all seems very Phil Spector-ish for something named ’90s Song’, but the title is no ruse, as for the main hook the band unleash a sound that mixes the best elements of Hole’s seminal – and career defining – ‘Live Through This’ crossed with something that sounds if it came from a Nirvana session. The contrast of the two styles is inviting, and for those that happened to be in their late teens and early twenties when the alternative rock wave hit back in ’91, this will bring some warm, fuzzy and very knowing nostalgia.

On the flip side, self-proclaimed “sillycore” band Top Nachos offer something a little more disposable, but given their choice of promotion, that was sort of to be expected. Even so, their two songs are fine punky/alt-rock belters that should appeal to those who love DIY fuzzy noises and still reach for albums like The Lemonheads’ ‘Hate Your Friends’ and find merit in Pavement’s slacker noise. The better of the two numbers, ‘Fast’ does exactly what it says on the tin, with a world of thrashing punk riffs, crashing cymbals, distorted vocals and…whistling. Despite the speed, every effort has been made to make the (less than) two minutes as hooky as possible with the inclusion of a call and response vocal, a barrage of whoahs and a repeated refrain that’s fairly infectious despite half the lyrics being buried among the noise. Going for more of a fusion of old punk and power pop, ‘Getchu’ finds the duo slowing down, but not wimping out. A great vehicle for the drums, this track has a brilliant, crashy feel throughout which combined with an incessantly repetitive chorus, a few woos and shameless whoahs all glued by a shrill guitar riff ends up sounding like a garage band covering an early Pavement track. In terms of generating some excitement as well as showing a broader range of Top Nachos’ talents, it’s got most of the important bases covered. Both tracks are a great primer for their ‘Dank Side of The Moon’ release where they share their wisdom on vegan doughnuts, punk rock holidays, moving to Canada and the universal appeal of telling Donald Trump to go fuck himself. What more could you want?

King Pizza have released some great DIY material over the years, including unmissable releases from The Mad Doctors (RIP), Sirs&Madams, Sun Voyager, St. James & The Apostles and fuzz legends Vamanos!, but The Rizzos numbers included here almost eclipse most of those…they’re that good. Since Bettina has moved on to pastures new, at least she goes knowing her last recordings were a career best. If you love The Rizzos, you owe it to yourself to pick this up…and if both bands are new to you, try and grab a download whenever possible – you won’t be disappointed.