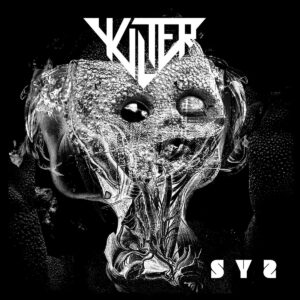 The opening number ‘Sentient Robots’ quickly sets up a brilliant riff based around a jazz funk oriented drum groove and deep sax. It gives new listeners half an idea where the band are coming from, but without giving away too much. After a few bars of relatively melodic but off-kilter jazz funk, the arrangement branches out further towards the avantgarde by dispensing with the core melody and concentrating on grinding, repetitious sounds and bottom end honking. Having now sent away any listeners with a fear of being challenged, the arrangement switches again to tackle some jarring beats and chunky rhythmic sounds. Having worked through several ideas, the number finally settles upon something that sounds like a massive collision between Morphine and Secret Chiefs 3, always showcasing Ed Rosenberg III’s horn. For the avantgarde rock fans, there’s an especially cool section somewhere around the three minute mark, Laurent David’s bass begins to sound even more distorted than before – hinting at a love for bands like Sleepytime Gorilla Museum, further cementing a connection with the alternative scene. None of this is easy listening, but it’s all pretty cool.

Opting for an even deeper exploration of their jazz tendencies, the darker sounding ‘The Turing Test’ applies a wheezing sax to a sparingly used harmonic bass, almost sounding like a mid 70s film score. It doesn’t give drummer Kenny Grohowski as much to do at first, but it’s soon clear that the interest in his playing often comes from the use of space and the way he uses the snare to punctuate the longer, drawling brass sounds. Eventually hitting something of a groove after a couple of minutes, it’s surprising that a band that love angry bursts of noise and the atonal as much would find a musical space that’s derived from early Weather Report, but this fleeting dalliance with a more obvious tune shows a definite love for 70s fusion. Here, listeners can actually hear the trio really pulling together; these obviously gifted players sound great when they’re actually surrendering to something of a more structured melody. Finally retreating into a looser space – though retaining something of a structure – the final passage presents hugely busy bass sounds underneath a clattering rhythm, where the more obvious melodic root comes from a fairly boisterous sax, always there to remind us that – whatever else is going on – there’s a classic jazz fusion undercurrent present that’s desperate to make it all work…and actually succeeding.

Having now warmed up, the gloves are truly off throughout ‘Mind-Body Problem’, when the bass takes the place of a lead guitar, throwing out shrill sounds for the duration, while a more traditional bass sound continues to pump a rhythmic heart. The way the bass drops descending scales between repetitious, almost circular riffs gives the piece a really full sound, while the sax concentrates on intermittent squonks and almost lo-fi musical accompaniment. Somewhere around the mid-point, the trio get bored with this and set about filling several bars with an Ornette Coleman styled free jazz, allowing for a couple of insane solos where the distortion covers everything. Upon finding the end of that, things take another unexpected turn when the main riff develops into a slab of distorted, alternative metal, very much reminiscent of bands like The Book of Knots. By keeping a much closer eye and ear on jazz influences, it’s still recognisable as a Kilter recording even if they end up tapping into something that sounds very much like a much heavier version of Greg Ginn’s fusion project Gone. For those willing to lose themselves in these six minutes of noise, there’s so much to enjoy, even if only as an occasional listen.

Naturally, Kilter don’t make music that’s for a broad audience, nor is it ever easy listening. The sounds they make aren’t even uniquely theirs, but there’s plenty of entertainment in the way they twist jazz saxes and sludgy bass sounds into ugly, yet weirdly funky soundscapes. As far as fusion goes, it’s all very challenging, but also quite rewarding in its own way. Those looking to stretch out beyond the likes of Mike Patton’s experiments on the Ipecac label stand to gain the most from the Kilter experience – and it is an experience – but lovers of some of John Zorn’s experiments and more open minded fans of the avantgarde should also find something of interest.