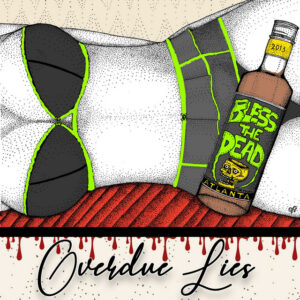 Following the release of a couple of EP’s, Bless The Dead’s full length release ‘The Boars Nest’ (Sliptrick Records, 2018) cemented their reputation as a growing force within the world of groove metal. Taking cues from Pantera and Lamb of God, the record wasn’t particularly original, but what it did, it did brilliantly. In approximately half an hour, it showcased a riff-centric band ready to bring their brand of metal to the masses. In an ideal world it very much needed a timely follow up to really gain traction – supplying something of a massive one-two punch – but it would take almost three years for the band to deliver their next studio recordings.

Their return may have been long overdue, but within seconds of hitting the play button or dropping the needle on this two tracker, you just know you’re in for a treat. ‘White Lies Dark Whiskey’ quickly sets up some brilliant heaviness via something derived from an old Lamb of God riff. The grinding guitar work is underscored brilliantly with a barrage of drums, serving up a classic sound, before a little more melody allows the band to stretch out effectively during the verse, and for those who are concerned things might not get angry enough, frontman Noah Welborn quickly allays any fears with a roar that falls squarely between Philip Anselmo at his most aggressive and Randy Blythe circa ‘Sacrament’. The chorus opts for a full on grind, making any of the previous Lamb of God influences seem non-committal in the process, and within two minutes Bless The Dead have set themselves in place as a groove metal powerhouse. All of that would be enough to make this track a winner, but the instrumental break ups the ante for musical interest, as guitarists Allen White and Jon Gray layer the massive riff with complex solos. Taking turns to fill a couple of bars each, the approach is reminiscent of Kerry King and Jeff Hanneman, even if the end result sounds markedly different. Between them, they’re able to run the full gamut: you’ll hear bits that call back to classic 80s shredders, a few nods to the tapping of the much missed and irreplaceable Edward Van Halen and – most importantly – a whole world of bendy string mangling that could easily be work of Mark Morton. In short, this is one of the finest groove-oriented tunes to emerge from the underground since French metallers Backdawn delivered their ‘I Shall Burn Your Empire’ album back in 2016.

‘Overdue’ takes a slightly lighter stance at first, peppering various Pantera-ish grooves with more of a Southern metal slant. This works excellently throughout an extended intro loaded with television news samples used to crank tension. After the belated arrival of a vocal, however, things revert to business as usual: Welborn reaches for the extremes with a throat-wrenching roar, which set against a barrage of pneumatic rhythms and intensive guitar riffs, often invites welcome comparisons to ‘Wrath’ era Lamb of God. With a more spacious arrangement, it’s much easier to appreciate Keith Graham’s solid drumming style; throughout these varied six minutes, he shifts between tom-heavy grooves and passages that hark back to classic 80s thrash – all delivered with the same sense of ease. The slightly slower tempo also allows for some uglier lead guitar work to take centre stage and the dirty, mangled (non) melodies that emerge in a couple of places are truly bizarre, much like Hanneman’s distinctive bursts of anger circa 1991. Although the chorus hook is obvious through a repeated musical refrain, the lyrics are not; as always with this style, though, the riff and heaviness are of greater importance, and in terms of groove metal entertaiment you couldn’t ask for a lot more.

This EP is a good example of how originality need not be important. What counts is utter conviction, and when it comes to that, these guys certainly don’t come up short. In an age where Pantera are considered yesterday’s men – and possibly should have their hero worship status revoked following that incident involving a Nazi salute – there’s a massive hole in the world of groove metal, and it’s up to a new generation of bands to fill it. On the basis of this pair of heavy workouts, Bless The Dead appear to be up to the job.