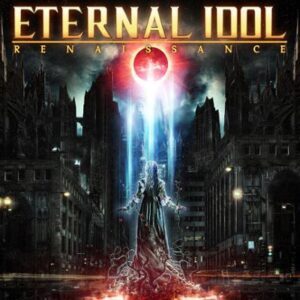 It arrives with all guns blazing with ‘Into The Darkness’ opening via a huge synthesized orchestral overture showcasing the talents of arranger Nick Savio. That gives the impression that the big sound is about to get bigger…and it does indeed with the arrival of some hefty progressive metal guitar riffs and a forceful Euro metal vocal. Those who love the style will be in their element; those who don’t will instantly baulk. Opting for bigger still, the crunchy riff switches for something more jagged as Fabio and Claudia engage in a vocal battle where he attempts something in the Jorn ballpark and she unleashes an impressive operatic range. It isn’t easy listening and takes a while to settle in – it’s certainly a couple of minutes’ worth of music that tries just a little too hard to impress – but once the number calms down, things improve somewhat. Fabio tackles a couple of passages that sound a little more like Threshold and an impeccably played guitar solo takes pride of place and with the eventual introduction of a couple of slower, more melodic passages, it’s easy to hear why such an overblown musical statement was chosen to make a first impression.

‘Black Star’ continues in a similar vein, but is a hundred times better. A far less cluttered arrangement allows for some great guitar riffs to pave the way, before slabs of orchestrated keys boost an already big sound. The dual male/female vocals sound even more natural during a verse that brings fine theatrical metal falling somewhere between early Nightwish and something with more of a power metal slant. You’d think that would be key to making the track hold up, but the vocalists are quickly outshone by Savio dropping in a guitar solo full of brilliant sweeping notes. Throughout his allotted thirty seconds, he strikes a perfect balance between melodic charm and pure flash. In a little over four minutes, most of Eternal Idol’s best traits are on display here. It’s probably fair to say that if you don’t like this track, the rest of ‘Renaissance’ will offer no further musical entertainment…

‘Flying Over You’ takes Eternal Idol’s symphonic hugeness and applies it to a sound that comes a little closer to classic Queensryche in places, while clinging onto a fair amount of influence that should appeal to lovers of the world’s many Nightwish clones. With some quieter music at play, Fabio tries far less hard in the vocal stakes and his more melodic charms really shine throughout. There’s something at the heart of the number that could lapse into musical theatre (more of which later), but it more than suits the band’s bombastic nature. Another standout track, ‘Dark Eclipse’ is on hand with some fine gothic rock where pulsing synths and a brilliant 80s sound draws closer parallels with ‘Dark Adrenaline’ era Lacuna Coil. It’s a bit of a surprise that there are melodies lurking beneath the main guitar riff that manage to borrow from Visage’s ‘Fade To Grey’ (though perhaps not deliberately) and hearing Andy drop in a brief snatch of Ozzy’s ‘No More Tears’ during the bassline is another great (possibly accidental) touch, but here – more than any other Eternal Idol number – it’s the chorus that wins out, and harmonising on a great AOR-ish melody Lione and Leyline prove to be a great pairing. If you’ve not heard anything from Eternal Idol before, you should head straight for this track. It’s far more user-friendly, while not detracting too much from their usual symphonic metal stock.

Opting for something even more accessible – though not necessarily better – ‘Away From Heaven’ thrusts Layline into the spotlight. As she sings against a stabbing piano melody, the effect is like being subjected to the purest musical theatre. That mood only increases once Fabio steps up to take the male role and delivers everything in his finest Toby Hitchcock styled boom. Some musical salvation arrives when guitarist Nick Savio offers a brilliantly played solo full of soaring melodicism, but it won’t count for a lot if you’re not keen on the theatrical style. Finally bringing in the heaviness, the band goes all out in the emotive stakes, but frankly, their take on the “Dream Theater plays a Disney ballad” schtick is a little tedious.

Bringing back a world of synthesised strings that sound as if they’re channelling Carl Orff, ‘Without Fear’ strikes another great balance between melody and crunch. The riffs that drive the verses are of the classic Euro metal variety, but there’s often an undertone of something slightly more AOR-friendly. Throughout the track, the whole band play up a Euro metal storm that’s almost guaranteed to catch the ears of symphonic metal lovers – it’s well played without reinventing the wheel, while a more palatable vocal shows how Fabio is a great fit for the band. By the time the chorus rolls around for the final time, the vague Carmina Burana vibes haven’t faded but they sound far more natural, and Eternal Idol’s grandiose mix of huge Euro metal and operatics feels very natural. With ‘Not The Same’ and ‘The Edge’ offering another couple of massive slabs of sympho-metal and each track being a showcase for Fabio and Claudia respectively, the album is afforded more strong material, though perhaps with the band retreating far more into their comfort zone. Even so, fans of the genre should find plenty to enjoy.

For those looking for something far more adventurous, the title track stretches the band’s various talents over ten minutes, creating a hugely epic closer. Moving through passages of vocals of purest musical theatre where Fabio and Claudia wail alternately, into moments that showcase unexpected Spanish guitar motifs and a heavy riff that sounds like a metal edged film score, it’s all very interesting. In some ways, the track achieves most of its goals within the first three or four minutes, but with the presence of a massive Euro metal rhythm, massively wah-ed lead guitar fills and a tone/rhythm that would suit both the young Bruce Dickinson (verses) and Russell Allen (everything else) it’s huge on entertainment. Obviously, the prog metal slant means that you’ll be drawn to the music before a chorus hook of any kind makes an impression, but in terms of musical abilities, it’s hard to find fault with Eternal Idol here. If you’ve stuck with the album this long, it’s almost guaranteed you’ll love this massive piece of bombast unreservedly.

There aren’t any obvious filler tracks within this album’s ten songs – even ‘Away From Heaven’ is well played; it’s just that the genre is nasty – and while some performances work much better than others, it’s hard to doubt Eternal Idol’s level of commitment to their art. Yes, sometimes it can be a bit too bombastic for the sake of it, but more often than not, the results are impressive. It might not score quite as highly in the originality stakes, but if you have any interest in the more symphonic end of the prog metal spectrum, ‘Renaissance’ is more than worth hearing.