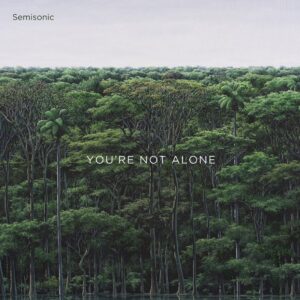 In the 90s, Semisonic scored a few massive radio hits on both sides of the Atlantic. Best remembered for ‘Secret Smile’ (an okay pop-rocker that seemed to take on an almost omnipresent status for a time) and the superior ‘Closing Time’, they had more than their share of fans, but much like the similarly adult oriented Dishwalla and Tonic, it seemed hard to imagine them as anyone’s all time favourite band.

After the band’s demise, frontman Dan Wilson released solo albums and carved out a career as songwriter for hire. While his solo career often seemed to languish in the shadows of Semisonic’s huge success, his song writing for others eventually paid dividends, gaining him an Grammy award for Adele’s mega-hit ‘Someone Like You’, alongside credits with Liam Gallagher and Taylor Swift.

2020 saw something most unexpected when Wilson resurrected the Semisonic name and set about recording new material. Almost twenty years on from their ‘All About Chemistry’ swansong, the five song comeback ‘You’re Not Alone’ is slick, but has just enough by way of muted guitar chops and ringing alt-pop moods to bring pop and AOR audiences together. Within a few bars of the title track it almost feels as if no real time has passed since the release of the last Semisonic recordings. With its buoyant sense of melody and light vocal and the way that quickly shifts into huge chunky chords underscored by subtle fuzz bass, it’s textbook Semisonic. If the structure of the chorus doesn’t greet fans like an old friend, Wilson’s higher registered vocal certainly will. In terms of hook, it takes a few plays to embed, but arrangement wise it’s certainly got a little of everything you’d hope for if you’re a fan.

Throughout the EP’s highlight ‘Basement Tapes’ Wilson clings on to what might be the most 90s guitar sound this side of the millennium, as moments showing off a light Smashing Pumpkins influence (a la ‘1979) collide with the kind of jangling rock-pop re-discovered on an old Tonic album. During the verses, Wilson almost sounds like a man on autopilot, driving Semisonic with sounds that seem decades out of time, yet at once capture a familiarity that’s quite welcome. Kicking into a chorus and with a rising vocal, this borders on classic Semisonic – melodic, catchy and very commercial – while ‘Lightning’ grabs a hold of a mid tempo rhythm that occasionally sounds like a 90s rock band tapping into John Waite’s ‘Missing You’, before cranking the gears a little more on a crashy but melodic chorus. Wilson’s lead vocal remains one of the most distinctive features as he offers a performance that’s guaranteed to thrill fans and irritate Semisonic haters for miles around – but there’s also lot to be said for how flawlessly he’s able to make the kind of thing you’ve heard a thousand times seem so surprisingly fresh in appeal.

Shifting to the piano, ‘All It Would Take’ is a fine power ballad with rock-ish undertones. The way strident chords collide with a huge bass sound sets a great track in motion and with Wilson’s vocal adopting a slightly lower register, there’s a richness in his performance that isn’t always evident elsewhere. There are even hints of something within the melodies that sound as if they might have initially had someone else in mind, but once the guitars rise to flesh out the tune, everything becomes more “obviously Semisonic”. It’s also easy enough to imagine this track in the hands of a band like The Fray. Nothing challenges; nothing seems out of the ordinary…even in terms of Wilson’s own penmanship, it doesn’t always feel new, and yet repeated plays unveil the kind of song destined to become a favourite. ‘Make Up Your Mind’ rounds out the five songs with something really jubilant. Wilson sounds ready to take on the world as he cries “It’s always the same fight / spilling out in black ‘n’ white” against a tune that sounds for all the world like a throwback to Powderfinger’s masterful goodbye ‘Golden Rule’. There’s even a chance that once you’ve heard this, you won’t so much be celebrating Semisonic’s return as much as really missing those heroes of Australian rock. [...And if you’ve never heard that Powderfinger album, you owe it to yourself to put that right before bedtime…]

With each of the tracks clocking in at around a near perfect three minutes, ‘You’re Not Alone’ is as much a showcase for Wilson’s song writing mechanics as the performances themselves. Luckily, each of the performances are fine too, and the EP format minimises any risk of anything sounding repetitive or dangerously like filler. With five well crafted rock pop affairs which – like Semisonic of old – seem tailor made for radio play, this is a release that will not only please extant fans but also stand a good chance of catching a few mature ears along the way.