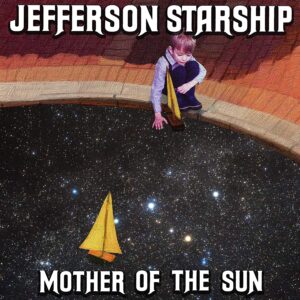 Plans for a new album were confirmed in the summer of 2018, but after the death of Jefferson Airplane/Starship vocalist Marty Balin in the September of that year, any future plans seemed uncertain. That new album eventually became a new EP and the seven track ‘Mother of The Sun’ blends the new with the old; places studio tracks next to random live recordings and also finds a few long-time Jefferson faces rubbing shoulders with newer talents. As you might expect, this cut and paste approach leads to a bit of a hotch-potch. However, for the Starship fan, there are some good bits to be cherry picked. Not least of all, the brand new recording ‘It’s About Time’, which makes this project genuinely worthwhile. A co-write with Grace Slick, this track opens with a huge crack of drums, moves effortlessly into a huge ringing guitar riff that’s worthy of joining those massive – and much derided – 80s hits for Starship. Moving into the meat of the song, everything remains very punchy: lead guitarist Jude Gold shows a real gift for retro AOR sounds and vocalist Cathy Richardson (a band member since 2008) belts her lungs throughout. The volume and trill in her voice makes it immediately obvious why Kantner chose her for the band; she has the kind of delivery that makes her a natural fit for both the 60s freakouts and 80s pop gems among Slick’s legendary performances. A one-line chorus is a bit of a drawback, but since the rest of this number comes across with unabashed jubilation, that can be forgiven.

Featuring more of a style that fits with Jefferson Starship (circa 1979) rather than Starship (circa 1987) ‘What Are We Waiting For?’ is rather more of a slow burner. Floaty, semi-proggy guitar lines drift from the speakers suggesting something more epic; drummer Donny Baldwin attacks with an almost tribal groove and long-time keys man Chris Smith overlays everything with a massive blanket of synths. From strong beginnings, it all descends very quickly into a forgettable MOR sound. Cathy’s voice suggests the same kind of presence as before, but her good work is offset by the legendary David Freiberg, a man with little more than a husk of a voice, ambling through the melody as if he were on a demo recording. Lyrical themes involving growth, change, business and political corruption and our need to act often make this number appear more important than ‘It’s About Time’, but the presence of another one-line chorus ultimately makes it unsatisfying.

Changing the mood yet again, ‘Setting Sun’ is a massive bluesy rocker which brings some basic enjoyment. Gold’s slide work has plenty of gravitas and the dirtier guitar sounds delivered throughout show Jefferson in their meanest mood since the 70s. It doesn’t have anything in common, musically speaking, with the previous tunes, but between a solid riff and an end product that sounds like Joe Bonamassa in a bad mood, it’s worth an inquisitive ear. Despite featuring the kind of vocal that’ll divide opinion, there’s enough meat in the overall performance to make it work and the live sound of the recording certainly brings out the best in Gold’s playing. ‘Runaway Again’ (not to be confused with ‘Runaway’ from 1978’s ‘Earth’ LP) is perhaps the most Jefferson Starship-like tune this time out, with a pleasing sound that falls somewhere between the warm MOR elements of 1975’s ‘Red Octopus’ and the melodic rock of crunch of 1979’s classic ‘Freedom At Point Zero’. Throughout this aching rock ballad, Gold’s guitar sounds are very natural and Cathy’s lead vocals are especially on point, showing her to be far more than just a Grace Slick impersonator. At the point where the arrangement reaches a natural climax, the band opt for something a little rockier and atop a dirtier guitar tone, Cathy reaches for a volume that’s truly impressive. There’s time enough to embrace her inner Slick once she unleashes the vibrato, but always uses that talent to embellish the performance rather than smother it. There’s also something within the flowing melodies that draw influence from the more modern vocal stylings of Miles Kennedy, showing how this line-up of Jefferson Starship aren’t purely about their own audience’s nostalgia.

Unfortunately, the rest of the EP doesn’t fare anywhere near as well. ‘Don’t Be Sad Anymore’ (co-written with the much-missed Marty Balin) is a piano ballad that belongs to a tuxedoed crooner in a supper club (or on a Frank Stallone LP) and is incredibly jarring when heard as part of this EP; a random live recording of ‘Embryonic Journey’ feels like unashamed filler (besides, any voyages into the past are better served by any one of Jefferson’s ‘Mick’s Picks’ live series) and an extended version of ‘What Are We Waiting For?’ is surplus to requirements.

Kantner and Balin are gone, Grace has long retired from live performance and, unfortunately, Mickey Thomas would much rather trot out rock karaoke fare than contribute anything interesting to the world of music. This leaves us with an oddly imbalanced Jefferson Starship that not even the multi-talented David Freiberg is able to pilot effectively at all times. ‘Mother of The Sun’ is a tricky beast with Starship looking to what remains of their future with new recordings but clinging on to too much of their past. Also, by making the best of the new songs sound too much like key moments from their past, the new songs will never be able to truly stand on their own. With ‘It’s About Time’, this release truly comes in a with a bang; with ‘Don’t Be Sad Anymore’ it’s out with a whimper and at most points between, there’s a band struggling to find a definite identity. At least with ‘It’s About Time’ and ‘Runaway Again’ long-time fans are given two great songs, but even on a release as short as this, that just doesn’t feel like enough…