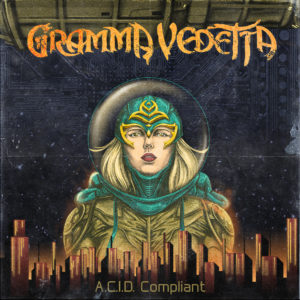 When Gramma Vendetta released their ‘Proof of Concept’ EP in 2018, the world was a very different place. Their punchy blues/garage/stoner metal hybrid sound was squarely about entertainment. After recording began on a follow up, a global pandemic forced everything into shutdown and – like everyone else – the band found themselves with a different set of priorities. The planned album became a stop-gap EP and the lockdown situation also gave them lyric inspiration, so, in many ways, their 2020 release ended up being a very different beast.

After three months of people doing makeshift acoustic performances from their kitchens, it’s great to have a more of a permanent record of 2020’s unease [well, we’d all rather none of this happened, of course, but you understand the point] and Gramma Vendetta’s ‘A Lucid Dream (Lockdown Blues)’ is especially poignant. The live sound of both the guitars and drums is superb and the swagger of the main riff wastes no time in presenting itself. The music that slowly unfolds over the next few minutes sounds like an especially bluesy version of one of Josh Homme’s Desert Sessions and its relative spaciousness allows frontman Dan M plenty of room to deliver a fine retro croon. After quickly asserting itself as an appealing melody, the track doesn’t actually deviate from its initial waltzing time sig or ominous mid pace; it’s left squarely in the hands of the lead guitar to add extra interest and a few howling notes are on hand to add some extra bluesy intensity. The fact that this number is so repetitive is actually quite clever: if you over-think it, it actually becomes a musical metaphor for the times in which it was created – a time where the weeks blend into the months; a time when routines beaome minimal and most days seemed the same.

The band’s previously displayed hard rock chops are presented with a brilliant confidence on the EP’s lead track ‘Hangup My Boots’, a huge stoner rock juggernaut powered by a massively retro riff and crashing drums throughout. The jagged edge to the main riff makes the band sound a little sharper, and although the fuzzy lead vocal features a slight twang on the verse that could be an acquired taste, Dan M rises to the occasion on the chorus with a massive sound that’s so 70s it beggars belief. One part ‘Sabotage’ era Sabbath, one part Queens of The Stone Age and one part ‘America’s Volume Dealer’ era COC, it has plenty of retro charm from the get-go, but by the time the band move into a relatively lengthy instrumental coda where a couple of classic riffs are wielded with abandon, this becomes required listening. It certainly runs rings around anything on ‘Proof of Concept’.

Falling somewhere between the two, ‘Porthole’ clearly has an influence from Black Sabbath’s trippy ‘Planet Caravan’ at its root – a slightly jazzy guitar tone and swathes of wibbly vocal filters are far from shy in showing this – but Gramma Vendetta take those familiar sounds and make them very much their own. The results sound almost like a spooked out Alice In Chains and although it can be very easy to play “spot the influence” here, the band’s playing and general presence cannot be faulted. Of particular note is the jam used to close the track, where Dan M’s guitar work moves between bluesy chords and jazzy fills with ease and bass player Basseta finally rises from the shadows to show off a complex and busy style with an amazing tone. Chances are that one listen to this will have you reaching for that much-loved vinyl pressing of ‘Paranoid’ in fairly quick time, but that’s certainly no bad thing. To finish, the brief ‘Everything Is Terrible & The House Is On Fire’ (the theme from the ‘Dumb & Dumbest Podcast) feels rather like an afterthought, but even then, a chuggy riff and solid drum part underscore various samples in style. After three great tracks this sounds like something that far from finished, but to be fair, actually sounds more effective if re-sequenced and heard as the EP’s intro.

Both ‘Porthole’ and ‘Hangup My Boots’ deserve to achieve the status of underground stoner classics and are reason enough to pick up this EP. While the whole thing certainly feels like the stop-gap it ultimately ended up being, that pair of tracks show Gramma Vendetta’s growth in both confidence and arrangement abilities in such a positive way that it ultimately makes ‘A.C.I.D. Compliant’ a very welcome release indeed.