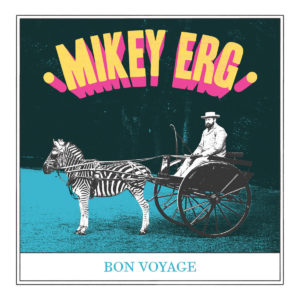 The cover tune isn’t anything from the world of punk or pop-punk, but a lesser known track by The Beatles. Erg takes ‘Mother Nature’s Son’ – a folky McCartney-led ditty from “The White Album” – and twists it into a pop-punk banger, complete with a lead guitar intro that sounds like something Jughead would have added to a dozen Screeching Weasel songs. It surprising how well the track translates into a full pelt punker, especially once Erg starts to deliver McCartney’s wistful melody at full volume. It even lends itself to a sharp lead guitar break along the way, but attempting to include Paul’s thoughtful humming coda is, perhaps, a step too far. Whatever, it’s an interesting addition to the million and one Beatles covers out there, and especially left-field when you consider that something a little rockier (like ‘Revolution’ or ‘Back In The USSR’) would’ve been a much safer choice…

With regards to Erg’s trio of self-penned tracks, the title track is the most vital addition to his extensive catalogue. Being a full speed punker with a fantastic Swingin’ Utters-esque riff thrown between the verses to add a necessary depth, it’s the kind of recording that’ll have instant appeal for Ergs! fans of old. In and out in under two minutes, it’s a genuine cobweb blower that’s reminiscent of a half-dozen classic Lookout! bands, while ‘Colleen’ fares almost as well by not hiding a genuine love of Screeching Weasel, as well as not trying to be too clever. Although it doesn’t come with a chorus as such, that all important earworm comes from a repeated hook of “Colleen…Colleen…Colleen” tempered by an unfussy backing vocal. If you’re more than familiar with Mikey’s formative years, you’ll certainly like it. Slowing down a little, ‘The New Departure Blues’ offers a much chunkier riff, falling somewhere between Riverdales and Weezer, showcasing a rather muscular arrangement. Unfortunately, in slowing down, it exposes Mikey’s lack of vocal finesse. His performance on this number is a bit nasal and flat, but still manages to be preferable to the whinier moments of ‘Waxbuilt Castles’. This will never be a cast-iron favourite, but since the other tracks are so good, it sits well enough in the context of the EP as a whole.

If you came to this EP hoping for old-school pop punk with a capital P, you’ve got it. Erg never makes any attempt of putting his own stamp on the genre – after decades in the business, he doesn’t really need to – but in playing things straight, he delivers a short work that’s almost guaranteed to please fans of Screeching Weasel, The Leftovers, The Manges and their ilk. With a couple of genuine belters and an inspired cover tune, ‘Bon Voyage’ does everything necessary to deliver a quick thrill.