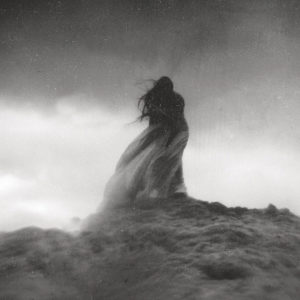 Before any real heaviness takes a hold, though, the opening number – appropriately (un)titled ‘I’ – does a really grand job of building an atmosphere. A very slow drum beat underscores cold instrumental music where a thin sounding guitar throws out a very slow, almost cinematic riff. This repeats slowly, almost unchanging for four minutes. The only vague signifier that the listener isn’t immediately stuck in a musical loop comes from a bassline that faintly increases in volume. Eventually, an explosion of sound brings an even colder sheet of shimmering guitar work and then a deep fuzz atop a classic sounding doom riff. The beats come even more slowly; each chord stretches across almost two and a half bars at a time; each successive chord repeats the same note. Beneath that, a second guitar teases with dark, long notes and occasional discords, adding to the wall of sound. Meanwhile, a man’s voice growls and husks accordingly, reinforcing the extreme mood. The vocal will be enough to send some listeners packing, such is it’s force and bleakness.

Assuming you can make it past that opening block of sound, the seven and a half minute mark brings in a few blackgaze flourishes via a more aggressive guitar and – subsequently – a massive drum roll ushering in the first (and only) change of pace. A clatter of drums and a riff shifting into a vague groove for approximately two bars suggests more of a Sabbathy feel might just fight its way through, but its to no avail once the main riff returns to dominate everything. Draining, droning and completely relentless in its quest for desolate noise, the track takes an even darker turn just before reaching a ten minute marker as the guitars intensify, but this is very deliberate. It’s actually a bridge to the track’s last – and best – section. Making the previous wade through obtuse noise worthwhile, Vofa increase the bass, add extra reverb to the guitars and a smidgeon of pace to the drums and close the track with a near-perfect funeral doom groove that not only sounds more natural, but shows how well these musicians are able to jell together when applying themselves to something with a little more substance.

From within a howl of wind comes a crashing cymbal, counting in ‘II’ with a most ominous presence. The throaty husk of a vocal doesn’t as much install fear into the listener as complete terror, but luckily, the first riffs that emerge come close to being the album’s strongest. A huge, almost clangerous guitar sound drowns out almost everything, playing chords so slowly that its as if someone has played back Type O Negative at half speed while a heavy bass drum marks out a funereal rhythm. The same musical pattern repeats like a death march to the gallows while a vocal lets forth several animalistic roars. It’s all much fuller sounding than the bulk of ‘I’, but not any more tuneful; at least not until a fuzzier riff takes over from the colder black metal influences, at which point, Vofa sound ready to launch into some of the best doom ever; something they manage – at least briefly – via a bit more enthusiasm from the drums. Even once the colder sheet of guitars returns, the remainder of the track continues to have interest thanks to a dual vocal that shows off a massive contrast. In the left speaker channel, the usual vocal continues upon its quest to deliver the most obtuse hacking, growling noise, while a counter vocal in the right takes on a clean tone with a huge gothic appeal. Like the end of ‘I’, it’s a reminder that there’s something here within the noise and that Vofa can be surprisingly complex as well as slow and desolate. Finishing with a classic doom riff set against a barrage of tribal drums and a far more recognisable groove, Vofa once again show a keenness to take the odd, unexpected musical twist.

‘III’ completes Vofa’s cold, dense assault across an equally barren thirteen minutes at first by teasing with slow, clean guitar work and howling wind sounds that come across like the soundtrack to an apocalyptic Western movie. Before too long, of course, anything cinematic just becomes bleak and dense as several bars of the purest funeral doom take a hold. As hinted at by the first two chapters, here – finally – those crushing riffs are delivered with a much fuller sound, while a heavy and really fat sounding bass adds an absolutely devastating bottom end. In fact, the bass sound that’s used a couple of minutes into this track makes the difficult journey worthwhile, as does the following guitar riff where the heavily downtuned sounds channel Electric Wizard, only to heavy those influences up those by about four hundred percent. Hearing Vofa shift from the slowest riff into a fist-pumping, fuzzier interlude could seem equally exciting if approached in the right mood, before the eventual return of tribal, almost cymbal-free drumming lends the final section something else with a little more than a fleeting melody. ‘III’ is almost as uncompromising as the rest of this disc, but a concession to a little more bass and less of a black metal tint certainly makes it seem slightly broader in appeal. It’s still never going to be for a mass audience, though. None of this is.

This album represents one of the darkest, bleakest slices of doom metal you’ll ever hear. Its coldest soundscapes often feel as if they would work better with visuals, and there’s not always much beyond a basic trudge through painfully slow noise to fill most of its thirty seven minutes. …And yet, despite being completely uncompromising, there’s something about it that seems to work. Maybe it’s because on that first, all important, listen, you’re constantly wondering what’s around that next dark corner? The tension is palpable throughout; the feeling of unease listening to this record brings is almost unequalled by anyone. Even if you’re particularly big on doom and funeral doom, it has such an uncompromising stance it often feels more like an arty experiment than an album that’s just meant to be enjoyed. Despite this, fans of the style should hear it – at least to say they did – but should continue to enjoy it in the long term, long after any element of surprise has long gone? That’s debatable.