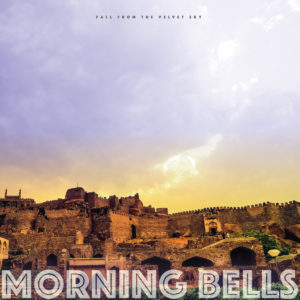 Somewhere between the works of Martin Rossiter, Old House Playground, The Bad Seeds and…The Connells lies the music Morning Bells. Purveyors of the finest thoughtful indie pop/rock, this Raleigh based collective is perhaps a little restless on their ‘Fall From The Velvet Sky’ EP. The five featured tracks wander a fine line between the gothic and soulful, between the honest and mournful, before ending up somewhere unexpected. The band’s way of working on the hoof and creating music borne within a moment means that sometimes, stylistically speaking, there’s a huge variation in sound. However, whether tapping into sad sounds or something a little more lively, they often create interest from the beauty of their unease.

“On this road of bitterness, it’s easy to get caught” cries frontman Ric Denton during ‘Through The Dark’, a definite contender for the release’s stand out track. A sad slice of adult pop that belongs as much in the mid 90s as the present, it’s a tune that fans of adult retro pop will love. Backed with an equally dour electric piano and sparse guitar sounds, his voice echoes with a jarring realism. His voice soon rises to fill what could be a heart-wrenching chorus if approached in a delicate frame of mind, and the gentle ring of the electric guitar and a steady rhythm do their best to give some weight to an arrangement borne of fragility. There are times when this track appears to channel the dark hopes of Gomez and the gentle ache of life’s disappointments as seen through the eyes of Gene’s Martin Rossiter, yet at the same time there’s something within the booming chorus vocal that recalls the more maudlin works of 90s roots rock bands like The Connells. Any similarity to that vastly underrated band mightn’t be a coincidence either, since their one-time drummer Peele Wimberley is an important contributor to the sounds of Morning Bells, here taking on the role of multi-instrumentalist. For many listeners, though, it’s ‘Ghost Story’ that will be an instant highlight. A moody pop-rock-goth hybrid, this track shows off Morning Bells’ sense of malaise in a way that feels dark and unsettling, and yet never morose. The crooned vocal is very assured; as before, Denton’s voice is placed front and centre within the arrangement. While he provides a great deal of aural interest, each member of the band brings something great to the arrangement. Drummer Bryan Franston’s unwavering rhythms constantly lead the band; bassist Laura Weislo places a huge, bendy bottom end sound against a jarring guitar and Wimberely punctuates the riff with a repeated musical sting that’s a very obvious lift from Nick Cave & The Bad Seeds’ ‘Red Right Hand’. An obvious influence, for sure, but without those haunting keys this track just wouldn’t be the same. What this doesn’t have is much of a chorus, but it doesn’t need one. By the time guitarist Emory Ball steps out of the shadows for a gruff sounding solo and the tune changes tack to introduce a few militaristic drums, the multi-layered arrangement brings enough entertainment in itself.

More of a slow burner, ‘The Truth Is’ blends a 90s Americana sound with a slow, hazy groove. A wavering synthesiser used to create a sitar-like drone lends the music both a gently psychedelic edge as well as a vaguely exotic feel, but in many ways its the lyric that’s of greatest importance. Although the musical arrangement retains a very downbeat feel, the chosen lyric appears to at first be especially maudlin, with “those who betrayed you” and broken hearts looming large at the outset. However, from darkness comes light and the message that we don’t have to hold our past seems to be driven by genuine hope. It provides an unexpected lift, but it’s with the pay-off that we should “keep pushing for tomorrow” that any real positivity hits home. At this point, if the band have in any way caught your ear, you’ll certainly want to keep listening.

In a slight change of mood, ‘The Night You Touched My Hand’ ushers in more of a jangling guitar and 80s indie rhythm. The more treble oriented sound makes the track sound like a polished demo in some ways, but assuming you’re not put off by its lack of warmth, you’ll find a number that’s about as big on hooks as Morning Bells get. A more obvious leaning towards Americana influences in its music brings echoes from both the earliest R.E.M. recordings and a pre-fame Connells, but the insistence upon a slightly crooned vocal always ensures it’s recognisable as being the Morning Bells that, by now, you’ve (hopefully) come to love. Ending the release in an even more upbeat fashion, ‘Tonight’ quickly settles upon a groove that has roots in UK indie from the 90s, while a fuzzy guitar line hints at a psychedelic revival and a strident piano draws more from the world of adult rock pop. With three very different moods coming together in this way, it could’ve been messy, but Morning Bells create a sound that really works for them; a sound that both ties to the perkier elements of the previous tracks as well as looking towards possible future musical avenues. It’s not just about the music, of course, since great music doesn’t make a great song alone and Ric puts in his best vocal performance. With busier music to contend with, he’s not been shy in pushing for a little extra volume. While the recording has a certain homespun quality due to a slightly flat drum sound, it’s still possible to hear a band that have really jelled, despite all bringing different tastes and influences to the table.

This is an EP of two halves, but whether moody or jangly, there’s something about Morning Bells’ music that constantly invites the listener to listen a little closer with each play. Like Yard Arms, the darker moments can be strangely uplifting, while the couple of lighter tracks have a strong 90s nostalgia that’s also very welcome. ‘Fall From The Velvet Sky’ might not appeal to those who expect instant gratification, but for those more mature music fan that’s happy to invest a little more time, this short collection of tunes should bring plenty of wonder.

1 thought on “MORNING BELLS – Fall From The Velvet Sky EP”