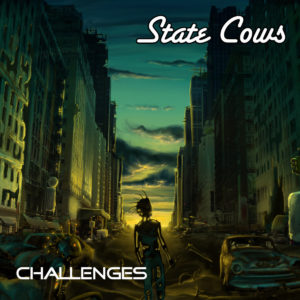 The band’s 2018 release ‘Challenges’ very obviously carries on their musical trend without too much deviation, but at least two of the songs rank among their career bests. The single release ‘Deportee’ especially sounds like classic, classic State Cows with it’s mid 70s Chicago meets Donald Fagen style electric piano. With a quirky sound really evoking the 70s, the track quickly gets under way in a funky fashion. With the addition of a shuffling drum beat and occasional lead guitars cutting through, there’s so much here that could have been culled from the Maxus LP from ’81 and within two minutes, a musical love affair has been ignited. A stellar guitar solo really lifts the arrangement, but even that is no match for Daniel Andersson’s smooth vocal – here, sounding every bit as good as on ‘Stella By The Barlight’ from the State Cows debut – and a harmony filled chorus worthy of the Doobie Brothers. In terms of retro yacht rock, this is perfect. Keeping with a defiantly retro yacht rock sound, ‘Waiting For Love’ is equal parts Toto, Michael McDonald and Christopher Cross in its construction, absolutely never caring for fashion and sounding every bit like something recorded in 1980 and only recently found in an archive. Various piano lines jostle and bounce to give a perfect soul-jazz vibe, while Daniel’s voice is equally full of joy. Fans of Maxus and Airplay will, again, spot an obvious influence throughout, but it’s all loving homage rather than lazy rip-off, with some great music being unveiled at every turn. By the close of the number, the arrangement rises from great to amazing, as a full-bodied jazz-rock guitar solo soars above the main riff, while occasional keyboard fills almost play for a call-and-response approach. If you enjoy yacht rock and westcoast sounds, this is a must hear.

Starting with a rockier riff, ‘I Got The Message’ comes closer to early 80s AOR with a selection of soaring guitar sounds and a slightly punchier feel. During the verses, the Cows’ love of all things sunny and smooth remains the driving force as Anderson delivers another flawless vocal, but lovers of early Toto, Maxus – and much later, State of Salazar – will be in their element when the chorus hits. It isn’t necessarily as catchy as a couple of the band’s earlier tracks, but the overall sound is superb – and it’s so hard to believe this was recorded in 2019. ‘Cease To Ever Have Been’ could have been lifted straight from an early 80s Chicago LP and very much finds the Cows on autopilot, but even then, the combination of a terrific vocal and strident piano is very appealing. A busy sax solo shows off their utter disregard for being considered cheesy and for lovers of their previous albums it’ll pass a very enjoyable four minutes. Combining a choppy guitar and squirly synths, ‘Borrowed Time’ takes a detour into techy pop-rock and this natural progression for the band shows how they’re equally adept when it comes to putting their own stamp on something that sounds like it’s been lifted from the Mr. Mister back catalogue. With an easily lovable chorus and well constructed solo to compliment the stabbed 80s synths, it’s a really enjoyable listen…and especially so, if you’re someone who craves good old retro pop.

‘All Over’ introduces some fine jazz keyboards – sounding for all the world like guitar synths at first – leading a smooth number that might just be State Cows’ slickest to date. With those keys interspersed by some lovely lead guitar stings and joined by a perfect lead vocal, it gives the album a track designed very much for fans of early Marc Jordan material, while ‘Human Ladders’ adapts the preferred westcoast sound for something a little funkier, thanks to a groove-laden piano. By the time the hook presents itself, of course, the usual Toto love and a world of harmonies push forth, which makes a great contrast with a few jazz fusion influences. The nods to jazz are stronger than ever here thanks to a confident keyboard solo, but it’s worth pointing out to jazz heathens that any indulgence doesn’t get in the way of a superb song. ‘Wildfire’ takes a side step into musical territories that, at first, feels more throwaway. The opening drums sound ready to burst into a cover of Kiss’ ‘Anything For My Baby’, before a jaunty piano hints at something with a bigger rock ‘n’ roll heart. Soon enough, though, the track settles into something that’ll be far closer to fans’ hearts. The resulting tune manages to blend their beloved yacht rock with something a little busier without skimping on the harmonies, sunny moods and very retro synths. If anything sticks in the long term, though, it’ll be the relentlessly bouncy piano and Steely Dan inspired lead guitar breaks which go a long way to helping this feel like an old friend from somewhere around the second listen.

‘Darwin Awards’ is an unmissable track with heavy influences from Steely Dan and Chicago meeting with a smidgeon of Earth, Wind & Fire for good measure. Like the chorus sections of ‘Human Ladders’, it could be said that the Cows sound at their most soulful, but for those listeners approaching this disc purely due to a love of yacht rock sounds, it’s always those influences that play out the most. Nestled within a fantastic retro tune, the brilliantly arranged lead guitar work contributes a slightly bluesy solo and for an extra quirk, you’ll find occasional keys sounding like xylophones. A second guitar solo reinforces the track’s overall greatness as it drops right into a smooth westcoast mood, before the extended arrangement then takes in a synth driven passage, eventually tailing off with a slower groove and a final visit to the main hook. In many ways, its near six minutes could’ve been condensed into four and been every bit as effective, but as it is, it’s still a definite highlight – very much the kind of track that shows off State Cows’ full array of talents.

As always, State Cows sound like an amalgam of their many classic influences but throughout ‘Challenges the love for what they do comes through stronger than ever before. If you’ve still never heard the band you’re seriously missing out, especially if you still reach for the Christopher Cross debut, ‘Minute By Minute’ by the Doobie Brothers and those Donald Fagen records with any regularity. For most Westcoast and yacht rock fans, listening pleasure is guaranteed.

Although not included on the final album, a cover of Chaka Khan’s ‘Ain’t Nobody’ recorded during the lengthy sessions that made up this release will provide some very entertaining further listening for the State Cows fan looking to dig a little deeper. Their truly inspired version of the classic floor filler trades in its legendary disco roots for something more in keeping with the Cows’ favoured style and, unsurprisingly, their array of Mr. Mister inspired synths are placed front and centre, and their overlaid and mechanical style are the perfect match for Daniel’s voice. He doesn’t always sound as distinctive, but that doesn’t stop this being fun. In a world where Toto can cover Weezer, the doors are open for other melodic rock acts to loosen up and do something unexpected!