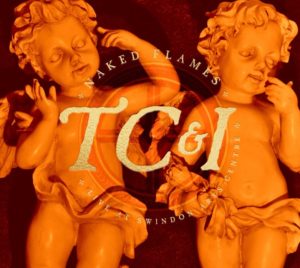 Swindon Arts Centre is hardly a rock ‘n’ roll epicentre, but it seemed so right for the shows in question. The fans would have travelled anywhere to see Moulding and Chambers sharing a stage, but since it was a local venue for both musicians and XTC’s legacy had revolved around the area, the six shows were more than local gigs – they were a homecoming.

Taking the best performances from across the six nights, ‘Naked Flames’ is a succinct voyage into Moulding’s song writing legacy, taking in a various highlights along the way. Beginning somewhere near the end, the very Jellyfish-esque ‘Say It’ makes a great opener with its bouncing, 70s pop piano riffs and almost McCartney-like gift for mundane story-telling. With Terry’s drums high in the mix and Gary Bamford’s strident piano work equally prominent, there’s always a nice live feel without feeling too rough. It’s a shame the same can’t always be said for Colin’s vocal; there are various points throughout this number where he’s obviously wobbly. True enough, he’s never had as much time on stage as he deserved in order to iron out the kinks, but he really struggles to hit the high notes throughout and there are times when the ravages of age show themselves on a thin performance. Still, all things considered, there are far worse live recordings out there and nobody ever thought this lovely slice of retro pop would surface in front of a loyal crowd.

Moving swiftly into the XTC classic ‘Ten Feet Tall’, the band sound a little warmer with Terry hitting a groove that feels very solid against some clean and melodic guitar work. The contrast between Colin’s very natural voice and the shimmering guitar lines very often provides the real interest in the performance. The TC&I EP standout ‘Scatter Me’ provides time for sweeping piano melodies and a very “grown up” atmosphere before the more familiar upbeat, stabbed riffs come through. For the first time, Moulding’s distinctive bass style cuts through everything and even though his vocal still has moments where he sounds like he’s in a rehearsal, the sense of fun within this group of musicians is more than enough to see the performance through. Between the sharpness of the keys and a mix that places echoing guitars in the left speaker channel, in some ways, this is actually better than it’s studio counterpart…even with some gently flawed qualities.

The release’s best moments then present themselves in quick succession with a collection of XTC classics – all from Moulding’s pen – none of which have ever been played live. The synthetic and 80s sounding ‘Wonderland’ has new life breathed into it via some great work from the rhythm section. Stripped of the familiar studio filtering, it comes across as slightly funkier thanks to a punchy bass. Moulding has finally settled in to his performance and it shows, since he approaches this song like a man who has performed it in front of a crowd for thirty years. Extra credit must also be given to Steve Tilling who plays some really understated jazz guitar throughout. By the time the band stretch into the coda, between the rigid rhythm section, those guitars and a few very 80s piano flourishes that sound like they belong on Van Morrison’s ‘Inarticulate Speech’ album (released the same year as XTC’s ‘Mummer’, from which this track is taken), it’s easily a set highlight. The double whammy of ‘Grass’ and ‘The Meeting Place’ would surely have been very emotional for those lucky enough to attend. The hazy ‘Grass’ has long been a fan favourite and much like ‘Wonderland’, it instantly evokes a hazy British summer. By 1987, XTC were firmly entrenched into the studio and with Todd Rundgren they created sounds that would have been increasingly tricky to replicate live. Despite that, this is good – surprisingly good – in the way its understated wooziness not only sounds like something strong enough to hold an audience, but also transport them into Moulding’s own mind meadow on a (presumably) drizzly night in Swindon. Likewise, ‘The Meeting Place’ acts as a strong reminder of the ‘Skylarking’ album’s magic even if the performance selected here sometimes captures a band whom, again, sound like they’re in a polished rehearsal. Part of the fault lies with the studio recording, of course; having created something with Rundgren that was never expected to stretch its pastoral little legs beyond the four studio walls, the results were always going to be a mixed bag. The intro attracts a huge whoop from the audience before a warm bass and mechanical rhythms take a hold. As with ‘Say It’, there are times when a stilted feel suggests a band who aren’t entirely comfortable, but the separation between instruments on the recording and Terry’s forthright drum sound make for a reasonably good recording. Listening long after the night in question, it stirs the emotions – it’s like evesdropping on something forbidden, or perhaps being dropped into alternate reality and experiencing what might’ve been.

Allowing for more reflection, the stripped back ‘Bungalow’ shows off even more range within Colin’s compositional palate and while it isn’t the best track on ‘Naked Flames’, it’s one of the best performances hands down. This live rendition is better than the studio version. Taking a completely stripped down approach of just vocal and piano for the most part, Colin’s quieter voice sounds as if its channelling Paul Buchanan and The Blue Nile with its outright fragility. Continuing the run of XTC classics, ‘Big Day’ brings stately pop-rock that, again, shows how Chambers can be a master of an understated rhythm, while Colin actually sounds like he’s fully embracing this opportunity to perform his songs in the way they’ve long deserved.

Coming back to the final days of XTC, a punchy ‘Standing In For Joe’ shows how that band were fantastic performers of a classic power pop style and its feel-good vibe really translates, before two massive hits provoke a deservedly big response. Both ‘Generals & Majors’ and the evergreen radio hit ‘Making Plans For Nigel’ present a band in full flight and even though Colin sounds a lot more world weary almost forty years on, his performances carry a nostalgic spirit. Moving into the Andy Partridge number ‘Statue of Liberty’, tribute is paid to XTC’s debut with a genuine respect, before the should’ve been massive ‘Life Begins At The Hop’ ends a fine evening of love and nostalgia. These earlier XTC numbers are always welcome but since other live recordings are in circulation, these recordings (obviously) don’t bring quite the same thrill as having bits of ‘Skylarking’ reawakened.

With TC&I having already called time on their collaboration by the time of this release and with Andy Partridge having withdrawn once again after a very public faux pas on social media, in many ways, ‘Naked Flames’ feels like the final word on XTC. In that case, it’s really fitting that so many songs make their live debut, whether the performances are great and spirited or decidedly wobbly… It’s a pity the recording sometimes feels like something that invites sombre reflection as opposed a massive, triumphant roar, but then goodbye is so often bittersweet.