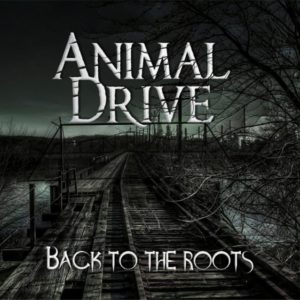 Realising that creating an equally strong follow up would take some time, in order to keep up momentum, Animal Drive decided to treat fans to a digital EP of cover tunes. This is hardly a new concept – at a time not so long before this, Halestorm turned the digital covers EP into an artform – but with ‘Back To The Roots’, Animal Drive offer something that’s about as good as it gets when it comes to reinterpreting familiar tunes.

Since ‘Bite!’ had drawn comparisons with Skid Row’s classic album ‘Slave To The Grind’, something from that album seemed like an obvious launching pad…and although they play everything completely straight, Animal Drive’s reading of ‘Monkey Business’ comes with plenty of passion and power. The bluesy intro is intact and the fierce crunch into the body of the song is impressive, as is Animal Drive’s obvious desire to heavy up the arrangement by about thirty percent. The main effect of this leads to plenty of horsie squeals from the guitar and a heavy as hell drum part. Factor in a gruff vocal and – despite being played fairly straight – it sounds absolutely terrific. Of course, Halestorm did exactly the same thing with ‘Slave To The Grind’ on their first covers release, but that shouldn’t detract from the greatness of this particular Skid Row cover.

The Warrant classic ‘Uncle Tom’s Cabin’ is treated with just as much respect and, again, the riff its put through its paces and been beefed up in the process. It starts well and builds to a fantastic peak with a couple of furious lead guitar breaks but, if anything, vocalist Dino Jelusic’s powerful voice that steals the show. Taking the old Jani Lane melody and really belting out the lyrics, he sounds like a cross between Russell Allen and Sebastian Bach, but with much better training. It’s loud and bombastic, but at the same time should thrill fans of a classic melodic metal sound. A run-through of Whitesnake’s ‘Judgement Day’ is perhaps less impressive, but that’s as more to do with the source material than Animal Drive’s actual treatment of it. The sub-Zeppelin groove now has a 80s Sabbath heaviness – very much run of the mill stuff for this band – while Jelusic takes the opportunity to show off his full range. Whether opting for a Coverdale-ish croon or full scale metal roar, he sounds like a genuine pro.

Absolutely towering above everything, though, is an inspired cover of Roxette’s old pop-rock classic ‘The Look’. While the EP’s other covers are spirited, they play rather safely; by taking Roxette and cranking it up to a Dokken inspired heaviness, you could easily say Animal Drive make the song their own. The bones of the original are firmly intact, except Per Gessle’s once near-spoken parts of the vocal are now belted with a hard rock grittiness and Marie Frederiksen’s pop harmonies are now retooled for an old-school metal shrillness. Musically, the band really goes all out: the guitars are firmly cranked – the main riff is injected with a hefty dose of horsie noises and occasionally the drums even punch through with the kind of power heard on the Tremonti debut. And, of course, they’ve not shied away from Roxette’s “na na na”s, so in terms of covers, this is terrific – a must hear.

Obviously, this was never intended as a life-changing musical statement, but as covers discs go, it’s great fun. It’s also a really handy primer for anyone yet to hear the debut album, as on these four tracks, you’ll be able to get a real sense of Animal Drive’s collective talents without having to acclimatise yourself with unfamiliar material. With some great performances and well-chosen material, ‘Back To The Roots’ is highly recommended.