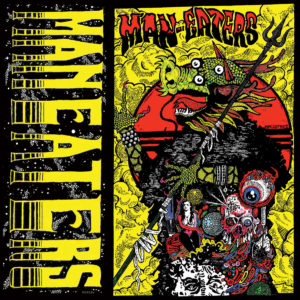 At their most accessible, ‘Taste Concrete’ fills a blistering three minutes with one of the finest Motorhead tributes you’re likely to hear. The pace is moderately fast and the overall performance comes dangerously close to sounding a lot like ‘Tear Ya Down’, only with increased bass and distortion. Half of the vocals are buried in the mix, but that only adds to a real urgency; the real enjoyment in listening comes from the playing itself – here is a band unafraid to show their influences, yet somehow still managing to sound gutsy and relevant. ‘Nasty Bits’ clings onto a similar speed and force, but cranks up the punkiness, sometimes sounding like a fuzzier take on the early Black Flag fronted by Keith Morris. The extra treble on the guitars comes through with a really cutting sound, but it’s the manic drum fills and reckless vocal style that steer this minute and a half into a brilliant punky oblivion. By the time it falls into squalls of feedback, you’ll almost certainly wish there’d been an extra verse, but after quickly seguing into the rock ‘n’ roll of ‘Down & Out In Chinatown’, it’s soon clear the next track is just as impressive with a hard rock multi-tracked guitar and the kind of vocal that rarely lets up. It’s a musical sidestep for the band, but an important one that shows they have a range of styles at their disposal. Ending up sounding like Zeke covering an early Rose Tattoo banger, there’s a lot here to love.

A devastating stoner rock bass at the start of ‘Carbona Guerrilla’ suggests more of a metal influence, but any flirtation with anything slower is brief, since the band then dares to apply the heavy vibes to a Speedealer influenced thrasher, before bowing out with a few unashamed early 80s metal riffs. In another unexpected twist, ‘Teenage Headhunter In A Cargo Cult’ takes most of the band’s usual tropes and then adds and a twin guitar and bass assault that almost takes on the mood of twisted, punk-fuelled surf rock. Saving their most heavyweight number for a parting shot, ‘The Electric Umbilical Chord’ fuses garage rock and metal in style. A massively overdriven bass kicks things off before howling guitars add extra textures. Then, at the point you suspect everything’s headed for a Monster Magnet style wig-out, Man-Eaters double their pace and intensity, throwing out sounds that come closer to the likes of Speedealer. The push and pull between the two main ideas works exceptionally well and by the time you’ve taken note of an ugly lyric and uglier vocal delivery, Man-Eaters have already ended their debut cassette with the kind of musical kick in the face you’d wish more punk bands could deliver.

There isn’t always any real originality in Man-Eaters’ sound, but what they do, they do absolutely brilliantly. This has everything you could want from a release that’s drawn from a hardcore punk template – the songs, though ugly, are great and the playing is superb. It isn’t long enough by half, but that only increases the overall intensity. If you’ve ever had a love for early Motorhead or bands like Zeke – and especially the latter – you’ll find this an absolutely vital addition to your collection.