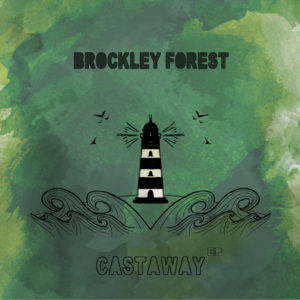 When Brockley Forest released their ‘Die Has Been Cast’ EP in 2015, it felt as if the band had reached a turning point. While the raw garage blues of their previous releases still provided the heart of their music, the EPs songs showed a leaner, meaner Forest – slightly more commercial without selling out; by providing bigger hooks on bigger songs, they really stretched their musical talents.  Following a long gap between releases, Brockley Forest’s welcome return with 2018’s ‘Castaway’ is a step forward yet again. The production values on these three songs are terrific. Far removed from a garage based labour of love, the material has as much punch as that Royal Blood LP you all love – even though there are better exponents of that style – and the choruses are more than sizable.

The lead track ‘One Obsession’ wastes no time in setting up a heavy bass drum stomp, instantly making the band sound like Band of Skulls with some heavier bones, but it’s when moving into the verse the magic really happens. Against a tough blues rock riff, Dec throws out some fierce slide guitar work – instantly recalling the best moments of Brockley Forest’s debut EP – before a moody vocal and darker and heavier style eventually takes a hold. There’s more than enough here that’s recognisable as the band you’ve come to love, but that fuller sound combined with an “ooh”-ed vocal hook almost gives the track a slightly desert rock feel. It’s the sound of a band with a bigger recording budget at their disposal…so finally, their talents are heard with something that may have broader appeal. This experimenting with fuzzy, desert rock sounds continues into ‘Nineties Death Trap’, a full blooded rocker that comes across like a Royal Blood meets Queens of the Stone Age jam. Seb, pushing his voice for a slight croon, puts in one of his best performances while drummer Seb sets up a hard but melodic, almost rattling and retro groove on the drums. Yes, again, there’s a slightly more commercial edge, but never any feeling that the musicians aren’t being true to themselves. If you’ve never heard Brockley Forest before and like Them Crooked Vultures, Band of Skulls, Royal Blood et all – yes, all different bands but all carrying a very similar retro heart, especially in production style – then this track is destined for a playlist of favourites.

Following samples of ocean noises, the title track kicks off with a brief burst of slide guitar, before settling on a bass drum heavy groove that sounds like a more focused version of The Birthday Party. By the time the verse really kicks in, though, it’s clear that the track is more than a collection of it’s own influences. Seb and Dec push their garage blues into fuzzy and dark places once more, but this time it’s almost a semi-gothic take on their chosen genre. Choppy guitars and a deeper bottom end soon come together to create a haunting sound, something accentuated further by clean vocal howls and samples that may – or may not – centre around a drowning man’s final moments. It mightn’t be quite as epic as ‘Nineties Death Trap’, but with a jarring emptiness colliding with more big riffs, there’s more than enough to reel in the listener – new or old.

Although there are only three tracks and nothing seems quite as immediate as ‘Rubicon’ from the previous release, in many ways, this is Brockley Forest’s defining work. The production is brilliant; the playing just a little tighter than before, but all without losing the element of gruffness that made the duo sparkle that very first time they hit your ears. Now sounding like Brockley Forest with Josh Homme in the producer’s chair, ‘Castaway’ (the EP) is massively ballsy. While a couple more tracks would have certainly been welcomed, this is a short and impassioned slab of blues oriented stoner-ish rock that needs to be savoured – and loudly. Check it out at your earliest opportunity.