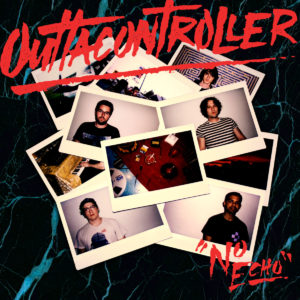 Having previously regaled the world with tales of TV Zombies, R. Stevie Moore and Pizza on their ‘Television Echo’ LP in 2015, Canada’s Outtacontroller begin 2018 on a similarly energised and fuzzed out wave with four more more songs of trashy debauchery.

Although comprised of recordings made at a brand new session, thematically speaking, there’s common ground covered on their ‘No Echo’ EP, since ‘Prime Time’ echoes their love of TV and ‘Something Wild’ hints at a band who believe firmly in the old Spinal Tap maxim “have a good time, all the time”. There may only be ten minutes’ worth of new music here, but this disc represents quality over quantity.

‘Prime Time’ kicks things off with a hefty snare drum and repetitive, distorted chord pattern. As intros go, the combination of musical punch and repetitious vocal refrain makes an instant impression, but moving into the meat of the track, it becomes clearer that this band really understands the importance of a melodic edge. When the chorus hits, the proto-punk/garage vibes are peppered with a poppier hook that delivers a snotty attitude and somewhere beneath a wall of distortion the addition of 60s pop handclaps lifts everything just enough to reel in the power pop fans. Those hints of power pop come to full fruition during ‘Cheap Leather Jacket’, as ringing guitars and further handclaps recall bits and pieces from The Real Kids, PezBand and their late 70s brethren. In proper Outtacontroller fashion, though, this is no straight rip-off/homage; they scuff up those 70s pop threads and douse everything in a wave of distortion. It’s never ugly enough to disguise a great song of course…and the main hook here – simplistic as it might well be – is ridiculously infectious. Regardless of whether or not the whole EP is designed for a mass audience, this track in particular should be sought by fans of melodic punk and classic power pop alike.

For those looking for something a bit punkier, ‘You’ll Get Yours’ takes a sidestep from the enjoyable garage rock fuzziness and takes the inevitable trip into sounds that echo New York, CBGB’s and – most obviously – the early Ramones blueprint. The guitars take a much faster and almost buzzsaw mantle, while the vocals really deliver on enthusiasm. The recycling of classic Ramones riffs never gets old…and here, there’s much to love, especially as a speedy riff collides head on with another catchy vocal. Throwing in a few Phil Spector-drum fills and a couple of 70s pop hooks increases the levels of trashy fun and by the time a Wurlitzer organ fills space against something that sounds like sleigh bells, it has to be said that the kitchen sink has been firmly applied in punk terms! ‘Something Wild’, given the task of bringing this rousing but short collection to a close, applies the more commercial garage rock sounds of The Hives and The Strokes to a classic riff, but in an effort to ensure it never sounds too commercial, the vocal has been subjected to so much distortion it barely sounds human. A world of woo-hoos now sound like kazoos and the main lyric drowns within a world of noise but somehow, though, the band rescues the melodic root for a great guitar solo to finish, leaving the feeling there’s a decent garage rock/power pop hybrid buried in here somewhere. While this mightn’t be quite up to the same standard as the rest of the EP, repeated listens reveal a fun number that perhaps deserved a more sympathetic send-off.

Outtacontroller might sound like they’ve drawn three or four very obvious influences from the past, but it’s what they do with those that really counts. On these tracks, the band sounds vigorous, fun and loaded with power-pop and punk appeal. Each number is enjoyable for different reasons – even ‘Something Wild’ – and, as such, it’s a very close call for stand-out track. ‘No Echo’s whole is greater than the sum of its parts and everything combined results in a killer EP.