In August 2017, Real Gone attended the Star Shaped Festival in London. Like so many, the re-formed Sleeper were the big draw for us, but the day brought something rather unexpected. A mid-afternoon set from Jake Shillingford’s My Life Story ranked a close second in terms of entertainment. We approached the set with no real expectations and…an hour later, we considered ourselves fans. It wasn’t just the material that won us over; it was Shillingford’s command of the stage and audience. At approximately 3:30PM, from the back of the venue, we watched as a few pockets of people bounced, while others looked on. About forty minutes later, most of the venue was bouncing and waving in unison, so obviously swept along with the band’s infectious levels of enthusiasm. We knew, after that, we just had to see My Life Story again…

It’s December 22nd and really hard to believe that Christmas is just a few hours away. We’ve not heard bits from Troika (with or without Greg Lake) or festive favourite Jona Lewie while out and about this year but also, at just over ten degrees outside, the weather is surprisingly clement. Islington isn’t anywhere as busy as it should be, either; in short, it’s just not feeling very festive.

We’re here to see My Life Story, having purchased tickets on the day they were announced, making good on our earlier promise. The venue is not exactly packed out, which isn’t at all a reflection of the band’s quality but more of a case of scheduling; so many people with families can’t afford a gig so close to Christmas. This is fine with us though, as we’ve settled into a space about three rows back from the front, centre stage. It’s the optimum position to watch Jake Shillingford weaving Britpop magic.

The band arrives on stage at 9:35 amid a reasonable amount of excitement. Taking his place at the mic, he softly sings the first two lines of the Band Aid perennial ‘Do They Know It’s Christmas?’. Upon reaching the idea that “there’s no need to be afraid”, he bellows “Yes! There fucking is!” and without further comment, the band launches into the opening bars of a punchy rendition of ‘Breathe Out/Breathe In’. The sound quality in the venue is excellent and the friendly nature of the audience already suggests this show will be special. Moving into ‘Empire Line’, Shillingford remains friendly while the rest of the band start to look as if they’re gearing up for a great show. It isn’t really until the joyous ‘King of Kissingdom’, though, that things really get taken up a gear. A bouncy number – somewhere between XTC’s ‘Sgt. Rock’ and Jellyfish’s ‘Ghost At Number One’, this really gets everyone in the mood and moving. Behind the keys Aimee Smith looks as if she’s landed her dream job, the rhythm section are immensely tight while Jake is in excellent voice. Always a favourite track, this rendition is superb. 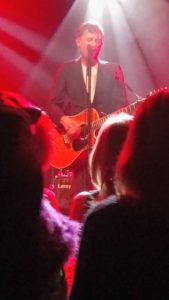 A brilliant take on ‘Motorcade’ – allowing audience participation on a selection of “ba ba bas” – keeps the fun factor high and, sure enough, by now there isn’t anyone present who isn’t completely drawn in. Most of us, though, aren’t having quite as much fun as a man in the front row who’s pogoing and pointing like a kid on excessive amounts of sugar. Hampered slightly by an acoustic guitar, Shillingford isn’t quite as animated as before, but it doesn’t stop this becoming a set highlight. The comeback single ’24 Hour Deflowerer’ represents some great indie pop – punchier than the band’s earlier style – cementing its place as a solid live set staple, sounding every bit as good as it did back at the Star Shaped Festival, while ‘Claret’ and ‘You Can’t Eat The Apple’ changes the atmosphere completely. It’s a moody ten minutes, but nevertheless and important shift in the set. With the former presented acoustically with just voice and guitar, it’s a nice show-piece for Nick Evans and the latter could be Jake’s best performance so far. These low-key songs really help to show the breadth of variety in the song writing and these live performances will maybe make their studio counterparts shine anew. ‘Neverland’, meanwhile, is stately but perhaps not as memorable as a couple of earlier numbers, before ‘Stuck Up Your Own Era’ trades in the pomp for a hefty glam stomp. It may be far from My Life Story’s best song, but it works well in a live setting.

The end of the main set brings a clutch of rockier numbers with the uplifting ‘Sparkle’ (a single that should’ve been a massive commercial success) allowing Jake an opportunity to use the stage to his advantage. He comes across like a cross between the young Damon Albarn (the energy, of course, not the smugness) and a more animated Jarvis Cocker (without any of the all too knowing self-importance) – traits which arguably come together to create the ultimate Britpop frontman. The brilliant ‘Funny Ha Ha’ (now supposedly a band favourite) also allows him to stretch his voice and encourage the audience to belt out their lungs on a very catchy chorus…not that we need too much encouragement. ‘Strumpet’ keeps the good vibes going before seguing into a cover of the old Adam & The Ants b-side ‘Fall-In’, delivered at high speed, with a suitable pseudo-punky gusto. The number is lost on some of the audience (a fact not lost on Jake himself), but for some of us who remember the performance from Star Shaped in August (and, indeed, the original Ants track back in ’81), this bouncing frenzy is certainly another high point from an already fantastic show. A fan favourite, ‘Mr Boyd’ – a tune by originally recorded Supertramp forerunner Argosy and surely the Britpop equivalent of an old Scott Walker tune in this band’s hands – ends the main set with the entire audience waving. It isn’t as impressive as the earlier Festival spectacle since this time the audience are all on the same page, but that doesn’t make it less enjoyable and the performance is spot on.

The enjoyment of this performance so far has come from something deeper than a well chosen setlist. The unscripted onstage banter this evening is excellent: there have been various references to the upcoming festivites; reminisces of the aforementioned Star Shaped Festival and repeated throw backs to the Band Aid refrain, creating amusement every time it arises. In so many ways, this spontaneity is an important part of what makes the My Life Story Show great [see their Manchester tribute to Bruce Forsyth for an excellent example]. Perhaps best of all, though, the invention of “The Christmas Chord”: a shimmery and almost bell-like keyboard embellishment that really heightens the silliness of the evening. Perhaps in the cold light of morning this won’t be anywhere near as funny, but for now, it’s about as Christmassy as anything’s been this December.

Changing into his best white pimp suit for the encore, Shillingford returns with his excellent band for a couple of My Life Story fixtures. ‘It’s A Girl Thing’ and ’12 Reasons Why’ I Love Her’, both go down excellently and there’s a feeling ’12 Reasons’ (which Jake prefaces by giving us Christmas homework to research the history of the harpsichord!) will never become tired or stale. There are guys with confetti cannons and the sights and sounds of a band in full flow, so maybe, just maybe, now things are feeling a bit more festive!

If there’s anything that comes across more obviously than ever this evening, though, it’s the lack of elitism. There’s no sense of clique whatsoever. Shillingford doesn’t care whether you’ve been a My Life Story fan since the 90s or whether you’re at the show as a recent convert – he just wants to entertain everyone on equal terms. So many bands and fans could learn from this. With a mix of great songs and one of the best frontmen ever, this was a show to treasure and an excellent end to the year.