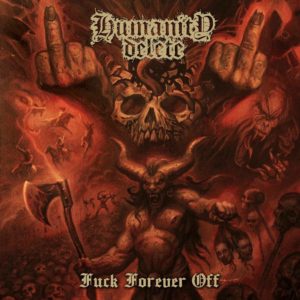 From the outside looking in, this second album by Humanity Delete seems a bit…silly. They’ve got a clumsy band name, a dodgy album title and even dodgier artwork. It’s 2016 and yet these Swedish death metallers present themselves with two raised middle fingers, a giant horned demon and a couple of severed heads. Not especially impressive. First impressions are important…but in this case, the music is far more important and ‘Fuck Forever Off’ is a solid, well produced slab of metallic intensities that brings past death metal traits into the present via classy playing, great production and the presence of a band who clearly know not to meddle too much with a classic musical formula.

Showing off a good many of their key traits, ‘Barbarian Axe’ fuses a typical death metal voice and pace with a heavy, groove metal guitar riff. This brings about a natural power and a sound which Humanity Delete really grasp. It’s intensely heavy and the vocal will always shut out some listeners, but it’s about to get heavier still with bars dedicated to a purer death sound, driven by bass pedals and drumming with an insanely fast wrist action. Even with all of that on display, the band set about creating a full sound that’s not just solely about the heaviness; the short guitar solo steps forward and adds a melodic lead with a couple of impressive squeals. In under four minutes, there’s a tight band at play on a tune with neither flowery bits or filler. ‘The Rotting and The Spoil’ begins with a downtuned heavy riff and some surprisingly slow sounds, much closer to the more modern approaches of the likes of Fleshgod Apocalypse than Death. This loses none of the band’s overall heaviness, but makes it more appealing. Frontman Jogga growls accordingly and while his death grunts very much up the ante of death metal antics. Those vocals are quite intrusive but the music shows the band know how to really work a riff. The mid section introduces a few predictable pneumatics and increased speed before a raucous solo pierces through, but when returning to the main riff, Humanity Delete prove both accessible and intense. In terms of genre, there’s a lot to enjoy.

‘Lairhunter’ improves upon previous sounds by stoking up the groove quota about fifty fold; it’s riff taut and tough, dirty and attacking like a concrete block. The sharpest edges are tempered by a slower and much darker influence from 70s doom, the slow and methodical style very much lifted by a twin lead. This is interspersed by more typical melodic death and thrash technique – allowing Jogga to adopt his finest growl once more. There’s a great balance between the pneumatic and chugging groove throughout; the push and pull of the two opposing paces really gives enough variety to please those who value riffs over chorus hooks. ‘Flesh Panzer’ works an almost mechanised and strutting rhythm under a wall of shredding guitars from the outset on a tune that seems a little simpler. As if realising this, the track then quickly drops into a jagged riff with a slightly off-kilter centre. Taking that and complimenting a fine growl of a voice, that would be enough, but there’s then a second shift into something much slower – and then back again. Three great, huge riffs and a very old-school melodic solo, this number is more than solid, while ‘The Hatchet Cleaves The Night’ adds a slightly different slant by opening with a sharp riff that has eastern influences. As if taking Lamb of God‘s strong blueprint and mixing it with some of the complexities brought by Aussie tech-death troupe Psycroptic, the boundaries are pushed just a little farther than before. The bulk of the track, of course, works some tried and tested heaviness, once again showing three very strong musicians.

‘The Creeping of the Shoggoth’ and ‘Burning Lands’ bring slight variants on prior heaviosities, but the album’s jewel ‘Into The Maze of the Minotaur’ is in danger of towering above some of the other tracks, despite the album showing strength throughout. In terms of melodic death metal numbers that really capture both the aggression and surprising accessibility of Humanity Delete’s preferred styles, this one’s really up there. With more pneumatics than before, drummer Brynjar really lets rip, hammering the bass pedals and clanging his ride cymbal into oblivion, giving a strong basis for both groove oriented and grinding circular riffs. Here, Humanity Delete sound as if they could take on the best, fusing the heaviest parts of Lamb of God with a few of the more death oriented elements of Decapitated, resulting in a hard and fast, particularly sweaty workout. Also, not that the lyrics are particularly clear, but a bit of mild peril derived from fantasy and history is always far preferable to the overdone themes of gore and torture set in stone from the genre’s formative years. Stylistically, it’s very hard to find fault.

The old saying that you should never judge a book by its cover has rarely been more appropriate (except perhaps in the case of Deep Purple, a band whom between 1971-76 repeatedly released classic albums in some of the crappiest sleeves ever). In relatively melodic death metal terms, Humanity Delete push all of the right buttons and if you need a fix, but want it without too many deviations, ‘Fuck Forever Off’ represents a half hour of very tight, no-nonsense riffery.