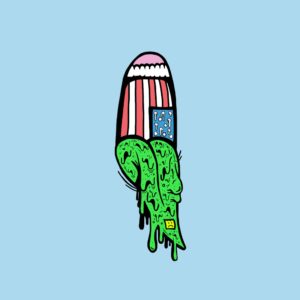 It takes more than guitar reverb and a perceived cooler-than-you retro attitude to make great music. Sadly, Seattle’s Acid Tongue haven’t really understood that. The bulk of their 2016 EP ‘Beautiful Disaster’ is an echo drenched, hipster baiting mess that relies far more on style than substance. Only one of the four featured tracks is worth hearing more than once: if not for the presence of the half-decent ‘Twisted’, ‘Beautiful Disaster’ would be a complete disaster.

The opening number (and title track) is a great indicator of where Acid Tongue’s chief interests lie, as a heavy, treated rhythm guitar cranks out basic chords over a steady drum. It doesn’t seem that bad at first, coming across like a more modern equivalent of the Stones’ deliberately hazy ‘Goats Head Soup’, but it’s when paying closer attention the problems start to arise. The solid but completely unremarkable tune rarely does anything different from the outset, filling a few minutes with hazy drudgery, while a filtered lead vocal treads a fine line between lazy melody and plain lazy. Nor is what barely passes as a tune really lifted by a slightly sloppy and very loud lead break. This, in short, is the poster child for trying too hard…and in trying so hard, it doesn’t come across as especially natural. ‘Mac & Me’ brings more echoing, clangerous dirges in the guitar department, a truly awful vocal where the singer sounds like he’s been recorded in a toilet…and nothing in the way of a memorable hook. There’s a pleasing bassline trying to fight those guitars for dominance, but it’s hardly enough to save a musical mess that is in danger of being a mere irritant. Trading in some of the electric elements for slightly stoned acoustics, ‘Annie Get Your Scissors’, meanwhile, strums in sub-Bolan fashion in a kind of hippie glam homage that’s all drippiness and no conviction. It’s a tune that neither has the imagination to tap into the Haight-Ashbury sounds of ’67, or the balls to tap into the folk-glam messes of a pre-‘Ziggy’ Bowie. By the time the bass presents itself half-heartedly, the whole thing just descends into an uninspiring, generic 70s homage. It’s a track that’s forgotten as soon as it’s ended and all rather weak.

The aforementioned ‘Twisted’ is a much better listen all round. It still has that overtly loud, oddly mixed feel of the first couple of tracks in places, but the band actually summon up enough enthusiasm to break away from the general murkiness of before, stepping up with a cheeky, reverbed, Stones-esque workout with a slightly camp vocal to boot. With tiny hints of Velvet Underground rawness and some great ringing guitar sounds, it’s finally possible to hear what Acid Tongue were striving for – and there’s even an attempt at a chorus hook, too, which obviously is a huge help. Even moving into the second half of the track where an instrumental break takes hold, everything’s in the right place; the guitars are crisp enough to carry a melody without losing too much of the band’s beloved drowsiness and the chords resemble a fairly enjoyable retro melody. It’s a shame most of this release is otherwise wasted on dirgy, boring material.

By all means, give ‘Twisted’ a listen, but don’t even bother with the other songs. When there’s a whole world of superb music out there begging to be discovered, where’s the point in wasting time on something that makes ‘Their Satanic Majesties Request’ seem full to bursting with great ideas…?