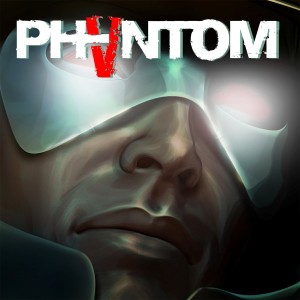 The word supergroup can sometimes be overused, even applied to bands whom seem nothing of the sort, but Frontiers signings Phantom 5 fall squarely into that category, with every member having already made a name for themselves as part of a German melodic rock band. Vocalist Claus Lessmann will be best known to most as a founder member of Bonfire; Michael Voss recorded as a member of Demon Drive before joining Bonfire and touring with Michael Schenker; drummer Axel Kruse scored previous accolades with the much loved Jaded Heart and guitarist Robby Boebel first found fame as a member of the brilliant Frontline. That line-up alone would stand Phantom 5 in good stead with regard to past experience and future potential, but the addition of ex-Scorpions bassist Francis Buchholz is the icing on the Euro cake. In terms of German melodic rock line ups – short of including of Matthias Jabs – you’d be hard pressed to find a better band of brüders.

Their self-titled debut is a crunchy but very melodic affair which, very much geared to please the average Bonfire fan, is totally rooted in the 80s. With the kind of opening riff that would have found a place on any 80s Scorpions album, a hard chug powers ‘All The Way’ in a forceful but very tuneful manner, while occasional twin lead guitars add a very welcome touch. Faced with one of Phantom 5’s heavier tunes at the outset, Lessmann sounds very comfortable and once the band shifts into a more AOR-centric riff for the chorus – borrowing more from Bonfire – there’s a feeling this’ll be great. Sadly, while that chorus has a great tune, it’s over reliance on the one line rather lets the side down. That might’ve been enough for this promising number to end in disappointment, but luckily Boebel and Voss are on hand to trade off solos to fade…and their fluid playing brings enough style to make it possible to overlook any lyrical shortcomings. ‘Blue Dog’ works a fine melodic rock backdrop with increased focus on the keyboards and cleaner guitar sounds. It’s pumped up and driving quality makes it difficult not to draw comparisons with Frontline – especially with the presence of such a great chorus – and, again, the featured solos are great. Even at this early stage of the album, the camaraderie between the band members more than shines through.

Another Scorpions-tinged intro sets ‘They Won’t Come Back’ off on the right foot, as the band launches into a mid-paced tribute to great rock stars who’ve sadly departed. Atop a great, chunky riff, Lessmann reels off a role-call of some repute, name-checking Dio, Def Leppard‘s Steve Clark, Jani Lane, Randy Rhoads and more besides. A couple of the lyrics appear somewhat dubious and the whole track wobbles, threatening to become cliché but it’s heart is in the right place. At another time, maybe it would be dreadfully clichéd, but at the time of release, the hurt left by the depressing amount of departed celebrities during the first few months of 2016 is still prominent; the passing of Prince, Glenn Frey and David Bowie hanging over us like gaping wounds that may never entirely heal. In terms of chunky rock, ‘Renegade’ really hits the spot with huge pompy keys joining heavy guitar lines to create something with a very full sound. Pulling back for the verse, Lessmann’s voice is perhaps a little too exposed, but a special mention must go to Buccholz, a man who anchors everything with a solid bassline, his years of experience telling him that flashy isn’t always necessary. Gang vocals are very much in order for a simple chorus – the kind of thing that would certainly sound better live – while sweeping notes and classic arpeggios inform another hugely melodic solo. Like ‘All The Way’, the main hook might be a bit too simplistic, but looking at the bombastic nature of the tune, it’s fine and the whole band delivers it with conviction. ‘Flying High’ fuses Euro rock with a heavy dose of trashiness, Voss and Boebel seemingly welcoming the chance to heavy things up, while the curlier edge of the vocal adds to the sneering edge. There’s a little less here for the more discerning melodic rock fan at first, but a slight key change into the chorus and one of the album’s best solos puts everything firmly on track.

The oddly titled ‘Don’t Touch The Night’ features more of the Bonfire-esque AOR tones on its chorus, striking just the right balance between hard rock and an 80s radio-friendliness. It’s a number where each of the band members excels; even Kruse, an under-appreciated contributor steps in with a heavy drum sound that appears very natural, while – once more – those keen on a smart guitar solo won’t be disappointed. Boebel’s playing is so good, it’ll provide more than enough inspiration for you to dig out those Frontline records. ‘Somewhere’ has a very similar effect, being a punchy mid-paced rocker, big on AOR harmonies and the kind of riffs that filled Frontline’s early records and ‘Frontline’ – yeah, they went there – is home to more great twin leads and strong vocals, with tough lead guitars colliding with the obligatory whoahs to create a veritable fist-fest. An album such as this wouldn’t be complete without a big ballad and while ‘Since Your Gone’ is no ‘Still Loving You’, it presents a huge change of pace – demonstrating more of Phantom 5’s range – and although Lessmann’s voice isn’t always quite up to the job, the music is lovely. The slower approach allows for some decent soaring guitar lines into a big chorus and a few cleaner guitar sounds are a nice touch. Starting things off with a distinctive bassline, during ‘Why?’, Buchholz exerts more of his solid sound, while the guitars adopt a chugging mood topped by a sharp staccato counterpoint. A couple of the main guitar chords sound as if they could drop into Bon Jovi’s ‘Let It Rock’ at any second, but the meaty bass and darker elements owe more to one of Dio’s moodier affairs. It’s all quite dark, but the three or four distinctly different melodic rock staples thrown into the pot of influences all come together in fine form.

The songs on this long player are mostly of a high standard and the playing is always solid. Lessmann’s slightly gravelly voice could perhaps be seen as the weak link, but even that sounds better given a few tracks to warm up…and better still after spending some quality time with the whole album. Fans of Euro hard rock – and especially Bonfire – will find more than enough to entertain, since Phantom 5 play melodic rock absolutely straight and in a manner that’s shamelessly old fashioned. There aren’t any surprises…just big riffs and melodic choruses the way you’ve always loved them, and this debut is often all the better for it, proving yet again, that most of the best melodic rock comes from those who were active on the scene that first time around.