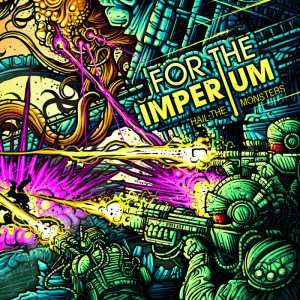 They waste no time in doing so, either. The opening number ‘Take a Breath, Now You’re Going To War’ isn’t so much a tune, more a complex statement of intent. A morse style electronic beat sets a tone, a deep voice intones the title and the band explodes in a frenzy of thrashing that has the speed of Strapping Young Lad, mangled with the time changes of Symphony X, played with the kind of wanton bizarreness that delights Fantomas fans. This allows the band’s pair of guitarists Joona and Ville plenty of scope for six string abuse throughout as they hammer home riffs at lightning speeds, while paying heed to the constantly shifting time signature, seemingly in the hands of Tuomas Rauhala who plays with fury, but the kind of intricacies that most would not manage at such speeds. It sounds like an impenetrable mess at first, but once you’ve tuned your ears in, there’s melody too, especially in the vocal department, with Hakim Heitikko even finding time enough for a quasi-melodious performance on a surprisingly traditional chorus hook. It’s buried deep below the barrage of noise and intense production values, but it’s there. As far as this album is concerned, this is good start, certainly, but most of you won’t make it much farther without a rest. As far as the band are concerned, there’s more gold to come.

With ‘Northern Rampage’ things settle down a touch. There’s a verse that echoes Pantera and a number of groove metal bands, something helped no end by a monster riff, but there’s a hefty nod to alt-rock and post-hardcore, too. For most bands, this potent mixture would be enough, but For The Imperium set out to amaze with even more than that: the gang vocals occasionally hint at trashy Euro hard rock – and chiefly Hell In The Club‘s brand of sleaze– alongside a jarring guitar part that comes straight from their progressive roots, as if Freak Kitchen’s Mattias Eklund stopped by to lend a little cheekiness. Overall, though it’s got attitude and punch enough for the whole album, and the aforementioned hook is great too – an album highlight for sure. In a change of mood, ‘Victim’s Day’ sounds at first as if the whole band are about to wimp out and go all Linkin Park. The rhythm is enjoyable and there’s a warmth at the heart of the intro, but it’s not long before everyone unleashes their inner demons and goes all out on a lurching metalfest that sounds like a Fear Factory remix of something by Between The Buried and Me. The spasmodic nature of the riffs and drums is utterly compelling – there’s a tight approach from the drums (bettered only by Dave Lombardo’s work with Fantomas) while the twin guitars absolutely slay with heaviness. So, what of the melodic intro? Was it a red herring? Not quite: a similar soulful melody creeps back in more than once more, as a crooning and clean voice taps into something that would suit Faith No More. This should be frustrating in its cluttered approach, but hats off to these guys: their talents are such that their avant-garde tendencies seem surprisingly natural.

Drones suggest something truly ominous over the horizon during the intro of ‘Heaven Shall Fall/Hell Shall Return’ and a quietly militaristic drum line suggests it’ll get bigger. In the ultimate wrong-footing of their audience, Hakim makes his first vocal appearance, delivering a light tune that isn’t exactly a million miles away from Seal singing a Killswitch Engage chorus. Pneumatic riffs drop in and spoil what feels like a more intimate moment, but it’s typical of FTI to play with such extreme contrasts. Eventually, that soulful voice finds a place over a heavy riff, huge on melody from all concerned. After a couple of verses, it’s all change again as the twin guitarists pick up their acoustics and play out with something that’s closer to Mike Oldfield in it’s light tinkling than any extreme metal you care to mention. As if they were afraid people would accuse them of wimping out, ‘Army of Death’ truly redresses the balance, with a guttural roaring vocal over a sledgehammer doom riff. Deep and dark – in some ways the heaviest thing on the album – this slow riff is immense. Layering that with atonal vocals that sit somewhere between Mushroomhead and Mike Patton proves rather unnerving…and in a further move towards forcing their audience to touch cloth, an atonal lead guitar shreds in a manner that makes this sound like the ultimate carnival of darkness. Terrific stuff indeed. For those hankering after the lightning fast approach of the opener, meanwhile, ‘FRNDSHP Is Over! P.S. Say No More’ should delight, combining Strapping Young Lad speed with a technical approach on the lead guitar that sounds like Mattias Eklund jamming with a power metal band, and all the while there’s a crushing sound that represents the very best in alternative metal. What there isn’t is much of a song, but you can’t have it all. If you’ve liked anything FTI have served up thus far, there will still be moments here that truly amaze with such bonkersness.

Rather bizarre, ‘Sexual Advisory’ issues various lewd suggestions and explicit nods over a pulsing electronic, almost industrial backdrop. The vocals shift between angry post-hardcore shouting and a man mumbling like Jon Pertwee, before eventually dropping into a heavy Fear Factory hammering. There’s no hook – just the intense repetitious riffing and the feeling of being musically pummelled. It’s great, but it’s not always obvious why. What is obvious, at this stage, is both the broad range of talents and the never-say-die musical attitude that scored For The Imperium support slots with the wondrous Devin Townsend. In a blistering three and a half minutes, ‘Sudden Death’ clears constipation at five hundred yards with a thrashing post-hardcore noise that fuses the best bits of Dillinger Escape Plan with the more arty bits of Dance Gavin Dance. Hakim tears his throat raw with screeches and screams, but at the point the crushing noise becomes almost unbearable, the band wanders into a moody quasi-Mushroomhead groove, with crooning voices to match. It seems inconceivable this number was written in this way as opposed to gluing together pieces of unfinished music in a Frankenstein fashion, but it works…by god it works. Closing this musical sledgehammer, ‘Filthy Animal, Go Save Yourself’ makes a huge feature of the electronic elements hinted at during the first track. Armed with big beats and (mostly) clean vocals, the effect is truly bewildering after everything that has gone before. Although it occasionally feels like a distant cousin to Brighton’s crossover troupe Collisions, it sounds more like a twenty first century Scandinavian Eurovision entry coupled with shouting. With a pop chorus and eventual pay-off line best described as tongue in cheek, it’s highly likely this is just a foray into Scandinavian humour…we’ve experienced similar odd-ball quirks from Freak Kitchen et al in the past…so why not, indeed, especially given that the previous eight tracks are absolutely immense? It is the album’s weakest link, obviously, but if any farther proof were needed that For The Imperium know no boundaries and care not what people think, this is it.

‘Hail The Monsters’ is only a couple of notches removed from being an avante-garde noisefest, the kind often championed by the Ipecac label. There are riffs aplenty, more than enough to satisfy the most hardened riff junkie; but to then have most of those riffs then disrupted – molested, even – by staccato juddering and wanton time changes is enough to send those more traditionalist ears running for the hills, or else reaching for their frankly boring Dream Theater CDs. With tracks that owe more to Strapping Young Lad channelling the likes of Unexpect and Fantomas than to pretty much any prog metal dullards you’d care to name, For The Imperium truly raise the bar abd the blood pressure; they challenge tolerance levels in a majestic fashion but serve up some great sounds. This is ugly, twisted, fascinating…even superb, but most people won’t get it. In the words of TV legend Neil Buchanan, try it yourself. After all, no amount of superlatives will come close to replicating this listening experience. It’s terrific. Frightening and intense, but terrific nonetheless.