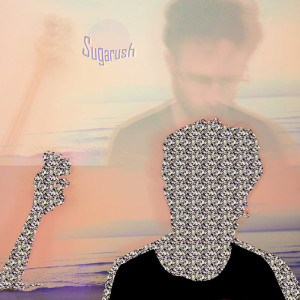 The band’s vocalist/guitarist Chen Firsel resurfaced at the beginning of 2016 under the pseudonym Sugarush, dropping an EP that, while showing off more of an acoustic bent than the work of Memory In Plant, still shows occasional traits from his previous work. It’s almost as if he’s allowing an insight into the earlier and more basic stages of his song writing; the word ‘song’ open to interpretation, once more, since these four pieces are neither very chorus-driven or especially friendly affairs.

The title track presents something relatively accessible, however. A guitar clangs out a hard metallic rhythm (in sound rather than heaviness), before a heavily treated vocal brings a darker edge. Briefly sounding almost like a hybrid between the wistful numbers from Deconstruction and a Guided By Voices lo-fi style, things get shaken up by a tinkling and busy lead guitar that occasionally dominates everything. Unexpectedly, this guitar riff sounds like a work in progress by Anthony Phillips. Although perhaps too short, this track has just enough going on to intrigue but without being too quirky to distract or off-put. ‘Diamonds’ is a little more complex, mixing electronica with something that sounds like a cross between a mandolin and balalaika. At the heart of everything, of course, is Firsel himself, portraying a role of a dark folk singer. With hints of Mike Johnson’s sadcore moodiness and a forlorn voice, everything lends itself to a downbeat performance. If somehow it feels as if the bewildering arty slant has gone out of the window, the lyrics seem more than happy to oblige with a main hook that suggests we shall “stand in the middle, with arms crossed on shreds of lemons” before being instructed to “go to the ant, you looking comatose”. It’s all pretty free-form.

The earlier hints of Deconstruction’s quieter moments come back with a vengeance during ‘Stellar’ – the EP’s standout track. As Firsel’s voice rises against a hard rhythm guitar, it becomes more obvious that any Deconstruction reminiscence is purely down to his slightly off-key, deep croon, which bears more than a passing resemblance to the younger Eric Avery. At the end of the first verse, the arrangement swells and percussive beats are provided by handclaps and rattling bells, occasionally borrowing from more traditional Mediterranean musics. There’s a genuine focus here…and then everything drops out to leave just swooning sounds and gentle slide guitar, almost as if we’re supposed to think of warm climes and the shifting tides of the sea as we listen. Another change of mood closes the release, as ‘My Last Brain Cells’ clatters with cymbals and a heavy bass, before dropping into a quasi-stoner affair that’s deliberately off-key throughout. Again, many might hear elements of Guided By Voices’ tape deck experiments, but the wandering electronica noises in the back often give a different perspective. It may be among the more adventurous, but even so, this is the weakest of the four tracks and isn’t necessarily something you’d listen to more than once.

Like everything recorded by Firsel – whether as Sugarush or as part of Memory In Plant – you won’t “get” it on first listen. To be fair, although this EP is rather marginal when it comes to obvious melodies, it’s clear there are a few interesting homespun ideas scattered throughout. It certainly won’t appeal to everyone, but one suspects that’s exactly Firsel’s intention.