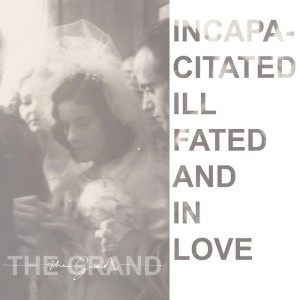 The Grand’s 2015 full-length debut ‘Incapacitated, Ill-Fated and In Love’ pushes the band’s brand of indie rock into the dusty corners of the psyche, often setting out as much to unnerve as entertain. Such an appropriately named album: the ten tracks take the listener through states of confusion, denial, anger, spite, heartbreak and more general upset in about forty minutes than most could ever manage. From a musical standpoint, experiencing this album is like hearing Arcade Fire dropping in on some of the bleaker themes from John Grant and Richard Thompson’s lyric books…and it’s bloody great.

A superb example of The Grand’s craft, ‘Don’t You Hate It When I’m Right’ echoes with a superb twang, the first half of the track lodging itself somewhere between a Tarantino soundtrack and a rock ‘n’ roll revival band on a supreme downer. The sparsity of the arrangement allows those hard strums to hit even harder, while vocalist Russ Smith approaches each line sounding like a man on the verge of a breakdown. Repeating the title for a chorus only serves to make things feel ever more claustrophobic, but it’s one of those tunes that becomes more revealing with each listen, our protagonist lamenting a less than successful relationship with a mumbling and frighteningly earnest recall. The tune’s second half introduces brass sounds somewhat unexpectedly, but their wintery parp fills the scene with a very complimentary sense of style. Fading out to deep bass grooves and a wandering guitar, there’s also a very strong sense of the affected parties within the song not gaining the closure they so desperately seek. Stark, but captivating.

Although The Grand are chiefly concerned with emotional disappointment, the tunes aren’t always so uncompromising. ‘Romance Is Dead’ mixes a negative viewpoint with some funky basslines and backing vocal “doo doo”s that have a sense of ironic disco. Topped with a cold, clanging guitar that owes a small debt to the early sounds of Bernard Sumner, this tune has a very full sound. While in terms of song, the warbly vocal feels occasionally out of place, all things considered, but there’s so much to eventually love here – especially considering a simple chorus hook that gets right under the skin. With Thomas Peel’s intense jangling guitar pitched against a nineties alt-rock bassline, ‘A City That Loves Me’ is more positive, but there’s still very much a sense the vocalist is trying to make the best of a bad breakup, with references to the bedroom and “streets that keep bleeding” tossed between a tune that pulls influence from The National and Arcade Fire. In fact, this is potentially the best track Arcade Fire never wrote; it’s certainly more enjoyable than almost anything on the overrated ‘Suburbs’.

Somewhere between these two moods, the joyously named ‘I Don’t Want To Make You Happy, I Want To Make You Cry’ is not exactly subtle, but the bitter sentiments are given an absolutely superb musical send off. The bass – again with a nineties flair – is very strong throughout, while the multi-layered guitars have a hard indie quality; whether going for sheets of cold rhythm or shimmering leads, they’re always thoughtfully played. ‘I Got It Wrong’ showcases a tight rhythm section, falling quickly into a solid groove, with slightly distorted sounds juxtaposed by a semi-acoustic guitar strum in a most unexpected twist, and a sparse solo that sounds like it could have been inspired by a Cure demo. Here, obviously, we’re not headed for anything that’s too emotionally positive – it’s hardly ‘Birdhouse In Your Soul’ by They Might Be Giants in the uplifting stakes – but at least the protagonist appears to be accepting part of the blame for any wrongdoings. ‘Hurt Me’ couldn’t be any more direct in its intents (“don’t ever come ’round again, unless you wanted to hurt me”), but even so, the stream of self pity presents a frighteningly ear-wormy hook in the process. More stripped back than most of The Grand’s general fare, Will restrains his voice throughout the track, pulling back from his preferred cry to a wistful, almost spoken delivery in places, while the drums mark time and the clean bass thuds with a very structured temper. While an easily likeable tune, the spiky edge and understated guitar work ensures the lyric takes centre stage and here, perhaps more than most, the sense of loss and self-loathing is palpable. In terms of presenting some retro sounds, ‘Why Don’t You Wait’ does a far smarter job – just when you think you’ve heard everything The Grand have to offer, they wheel out this almost perfect number. Retaining the sparser qualities of ‘Hurt Me’, it very much pushes the bass to the fore once more but allowing Smith’s playing to indulge in something more complex, while drummer Andy Jennings’s no-nonsense mechanical style plays a similarly dominant role. Between the intermittent guitars, tweaked with a discordant edge and more than a hint of New Order at play, Will, too, sounds much at ease. This is the sound and feel of a band who’ve a very definite idea of where their music is at this precise moment…and hopefully a good sign of where it’ll go in the future.

Very much saving the one of their best for last, ‘Evening Fell, The Curtains Close’ goes all out to create atmosphere. The percussion is minimal, just a heart beating drum and clattering rimshots; the bass is almost as stark, throwing out long and dark shapes akin to a track where The Bad Seeds collaborate with Bauhaus. The guitars make soaring sounds, lurking in the back, allowing the vocal to dominate. …And it’s one of those love/hate performances, a take where the voice is so very emotive, but not always the most tuneful; crooning, cracking, wobbling like a man close to tears, but occasionally shifting into a striking chorus melody that eventually carries the bulk of the still minimalist tune. If you can’t find an affinity with the voice, there’s nothing for you here, but in terms of creating a bleak soundscape that slowly builds in tension and volume across a broody, mean five minutes, it’s pretty smart.

With the moods shifting between let down, sulking indifference and the musical equivalent of having your heart pulled still beating from your chest, this album puts the listener through the emotional wringer, but when The Grand get it right – as they very much do on a bulk of the material – the results are fantastic. Their blend of accessible indie rock and gothy darkness provides some superb music throughout, and while the vocal style mightn’t suit everyone, if you can tune in, it’s confronting and unsettling style seems very natural for the material in hand. Not necessarily an instant hit, but ‘Incapacitated, Ill Fated and In Love’ has all the hallmarks of a potential cult classic.