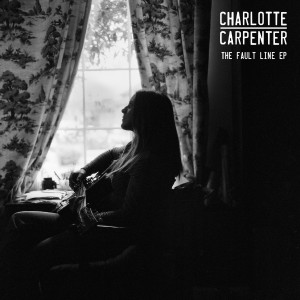 On her fifth EP ‘The Fault Line’, singer-songwriter Charlotte Carpenter serves up four tunes which owe as much to atmospheres as hooks, her natural and plain voice weaving in and out of some fairly downbeat soundscapes. Of the EP, she says herself: “I wrote this during a time where a lot of what I loved stopped feeling perfect.” It shows, too. The bulk of the material comes with a dark heart, but this is juxtaposed with a near-perfect production value, resulting in four songs with a real sense of emotional depth.

Never was this musical approach any more in evidence than on opening number ‘Break’, which opens with a couple of tinkling sounds that are almost a dead ringer for the intro from Pink Floyd’s ‘Echoes’ (perhaps unintentionally), before Carpenter’s guitar takes centre stage. Playing electric chords in a jagged, almost fractured style, her retro twang has an old heart, which is set against a more modern deep bass, representing an unease during the writing process that the songwriter refers to to as “splintered and fractured”. Her voice, meanwhile, sounds somewhat vulnerable without ever sounding weak. The whole musical picture oozes sophistication, occasionally reminiscent of the open-wound, bearing-of-emotional-scars songwriting that so many women favoured back in the late 90s. “If you wanna break, don’t blame me if I try to stay”, she implores, clearly not feeling this relationship is ready to dissolve. Reaching the inevitable climax, the music swells accordingly, the tinkling keyboard sounds finally find their place. The heavy droning qualities capture an emotional cloud and everything fades into silence. Moving into ‘Mean Time’, the arrangement has a more traditional quality, though the use of percussion is still rather minimalist, allowing the heady twang of Carpenter’s guitar to take centre stage. Far more accessible right from first listen, this tune has a strong backbone thanks to some superb reverbed guitars from the Chris Isaak school of playing, while the production is reminiscent in places of the sole album by Shelby Starner. Tapping into a much fuller voice, Carpenter owns this particular piece as her natural style wraps around a sizable chorus hook. The reflective style hangs onto a darkness that ensures this never sounds disposible, but any darker qualities are balanced out by that aforementioned hook that is surprisingly memorable.

Better yet, ‘Wasted’ takes another swipe at failing relationships (“I could’ve been so much better than I am…but I wasted time trying to believe you”), but despite Carpenter’s lyrical sharpness, it’s the music here that truly impresses. The retro guitar sound is in full effect, but rather than just rework a very old-school rhythm, things are stoked by a definite heaviness; increasing the power of the rhythm section shifts this into the rock bracket and the resultant riff is a killer. Along with ‘Break’, this number makes ‘The Fault Line’ an essential listen. “Are you listening close? There are things I am saying which you need to hear…sometimes the blues can choose you”, opines Carpenter during closing track, ‘Sometimes The Blues’, in a simple way of expressing the unhappiness that’s been surrounding her. This is not arrogance or merely even self-pity, though, since her voice still hangs on to both a sense of dignity and heart, while the music – again, quite sparse, brings a haunting edge to preceedings, with the verses mastered quietly, a fingerpicked guitar atop an almost ambient backdrop. This understated approach serves the number extremely well: when a percussive stomp puts in a belated appearance, the increase in volume is staggering. If Carpenter set out to unnerve and recreate the up and down nature of human emotions within a musical backdrop then this was certainly a job well done.

Carpenter’s songwriting talents are very much in evidence throughout these tracks and the sometimes sparse arrangements give the material a spookiness that makes it almost impossible not to sit up and take notice. Musically and sonically, this is a great EP. Sharp, sophisticated, much darker than 2014’s ‘Whole’ EP and a natural successor to the same year’s ‘Take It All’, ‘The Fault Line’ may find the songwriter searching the dark corners of her mind for inspiration, but thematically, the songs have a universal appeal. A recommended listen.