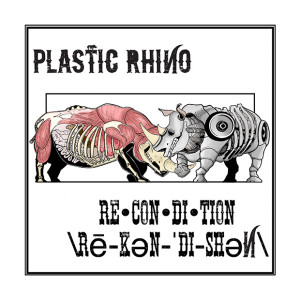 US alt-rockers Plastic Rhino mean business on their second release ‘Recondition’, as they celebrate a trashy hard rock sound with a nineties slant. Bringing back riffs from a (mostly) pre-grunge world, there’s a retro quality, though surprisingly, given the potentially disposable feel of some of the material, there’s a defiant steering away from the more obvious glam roots. Each track is loaded with a tough riff and often a strongly suitable melody, but those riffs are rarely pivotal in making Plastic Rhino’s material hit with a sizable punch, it’s never really Jack Glazer’s guitar playing that leaves an indelible mark. His playing is rhythmically solid without any hint of flashiness, for it doesn’t need an overt flair; the winning factor throughout these seven songs is frontwoman Atara Gottschalk (ex-Luxx), a performer who approaches each performance with consummate ease, whether called upon for something gritty, slightly unnerving or a more obvious rock wail.

‘Big Man Baby’ begins the release with muted chords and an arrangement that instantly recalls Ian Hunter’s ‘One Bitten Twice Shy’. Having reeled you in with its slightly stripped back qualities, Plastic Rhino suckerpunch their listeners with a huge hard rock riff and even louder vocal. Despite the crunch, melody is key…and on the chorus, everything really comes to life. Atara booms confidently with a bitchy lyric, and due to a poppy counter vocal, there’s a tiny homage to Garbage ensuring this doesn’t ever become overbearing. It takes a while to tune in, but once you do, it’s clear this performance has some real clout. With this track boasting one of the more infectious hooks, it’s all off to a strong start, but if you came looking for riffs, it’s safe enough to say there’s better to come. …But not during ‘H2S’, which is slightly deflated by comparison. Slower, and always keen to push the 90s alternative edge to the front, it boasts a strong bass sound and a few nice guitar flourishes, but the mean and moody style also acts as a huge comedown. As a standalone track, it’s decent enough, with Atara’s multi-tracked voice filling a strong chorus and the inclusion of a dark guitar solo that creeps across several bars, so maybe it’s more a case of bad timing…sequencing a release can be a tricky affair.

For heavy rock thrills, ‘M.A.D.’ is more than willing to oblige as Jack cranks his guitar to the max. The riffs are alternative but choppy instead of grungy; there may be a nod to the nineties, but the way everything moves without too much stodginess gives the piece more of a Lynch Mob/Dokken-esque feel than anything. Atop a riff switching constantly between dirty and clean – and also moving between the left and right speaker channels in a simple yet effective way – Atara works a deep rock voice, not so unlike Sass Jordan on her mighty ‘Rats’ LP, eventually moving towards a huge screaming climax. In these four minutes, Plastic Rhino hit hard; while they’ve not demonstrated anything in the way of particularly original talents, they’ve left you without any doubt that some of their arrangements sport some huge boots. ‘Like It’ switches gears a little to introduce a stomping drum and dirty riff that brings an almost funky swagger. This alone makes for an instantly likeable tune, a tune which Atara tackles with more Sass Jordan-isms than before, really unleashing the power in her voice, while the multi-tracked guitars top everything with a slightly distorted, vibrato-filled tone. Moving into the chorus, the funkiness subsides in favour of no-nonsense rock, and as the vocal rises to a bluesy cry, Plastic Rhino sound like a real force…and if by this point Atara’s Joplin and Sister Sparrow intensities haven’t won you over, then it’s fair to say that Plastic Rhino just won’t be your bag…

‘Make It Heavy’ offers meat and potatoes hard rock, working a riff that transports us back to 1990. Although sounding as if it should be the band’s call to arms, it’s not that heavy, but still has a certain weight to it. Jack’s guitars have a beefy tone, like a cross between the earliest work by Mindfunk and a heavier Buckcherry workout, while Atara’s slightly retro delivery melds the quieter elements of Sass Jordan’s grit with Tamara Champlin’s gruffness. The song writing isn’t necessarily going to win any awards, but then, it never sets out to be clever – this is music for the heart and not the head. ‘Queen Crimson’ beefs up the drums and feminist anger, with the guitars occasionally dropping in with a thinner metallic sheen, all before some occasional discordance and a rollocking solo. Parts of the track show off a different slant to the usual Plastic Rhino bluster, but a hooky chorus brings everything full circle with a gruff vocal and equally hard riff – a few plays suggests this is much stronger than ‘Make It Heavy’, but despite ticking so many of the boxes, it just doesn’t compete with ‘M.A.D’ or ‘Big Man Baby’.

Leaving their listeners with something more sedate, ‘The Ballad of The Last Rhino’ fuses the retro rock edge with something more soulful, something more in keeping with the Black Crowes-ness of oft-forgotten nineties retro band The Mother Station. “You keep me on the run, hurry with your gun” cries Gottschalk rather vulnerably, allowing the passion in her voice more room than before, though she is still very much in possession of the same power we’ve heard before. It’s thoughtful and perhaps a little more sophisticated than some of the material here, certainly helping ‘Recondition’ appear more rounded, and then things change gears dramatically as the band bow out with two minutes of high octane riffing that sounds for all the world like it was intended for another (perhaps unfinished) track. An odd move; one that’s hard not to feel was perhaps misjudged, as it really distracts – and detracts – from the softer part of the number. Even so, at almost six minutes, Plastic Rhino pour most of their talents into this final offering and there’s still much to like.

For those who like a slightly gruff and dominant female vocal – whether Sass Jordan, Beth Hart, the over-rated Janis – Plastic Rhino should push more than a few of the right buttons. It’s never going to be a classic, but if you approach ‘Recondition’ with a less serious ear and crave great riffs more than smart songwriting, you’ll be guaranteed to enjoy most of these tracks all the more.