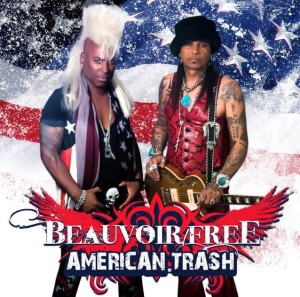 That first union of Beauvoir and Free proved somewhat shortlived – leaving us with just the one finished album and a bunch of very promising demos.  By the time COT returned to the studio to record a follow up, the guitarist’s spot had been filled by Beauvoir’s old musical partner Tommy Lafferty (ex-Voodoo X/From The Fire).  From that point on, the band’s albums were often enjoyable – each taken on their own merits – but none had the charm of that debut record.   With each passing year, the prospect of these men working together again seemed to grow ever more distant, but still we’d always have that COT debut and its many treasured associated memories.

…And then in 2014 – twenty years after the release of the Crown of Thorns debut – the announcement came that Jean and Micki had been writing together.  Twenty years is a long time, so there’d always be that grumbling feeling that anything that eventually surfaced might not meet expectations…but the results of those writing bouts, collected here on their 2015 release ‘American Trash’, are fantastic.  Right from the opening crunch of ‘Angels Cry’, there’s a clear feeling that an old spark has been reignited.  Free taps into a huge riff with bottom end, instantly making the listener feel as if there’s something special afoot…and once Beauvoir starts to sing, these feelings are confirmed, since Jean appears in rather fine voice, almost – if not exactly – sounding as strong and confident as he had two decades earlier.  It takes more than a good sound to impress in the AOR stakes, of course, and these guys really deliver on the chorus, bringing the first of several huge hooks.   It’s not perfect – the production values aren’t quite on the scale afforded to Crown of Thorns in the hands of Beau Hill, and all drums appear to be programmed – but even so, it’s an impressive start.  Moving through the meat and potatoes 70s rock of ‘Morning After’ – it’s heavier elements intercut with an acoustic chorus – Micki Free shines as he churns out some great lead work, while the upbeat ‘Shotgun To The Heart’ finds the duo rocking out in a fine melodic style.  Slightly filtered vocals give Beauvoir an unnatural gleam in his delivery, but it’s never too distracting, and once again – bringing a great riff and greater chorus hook – there’s more than a hint of the older Crown of Thorns and Voodoo X material at play.  Those whom seem indifferent or even upset by the use of vocal filtering on this number should find plenty of solace in a superb lead guitar break, with Free sounding particularly dextrous across his frets, before reaching a chunky climax of twin lead work.  In all, a fine pair of tunes.

An instant stand-out, the title track comes with a huge swagger and an almost glammy stomp.  The glam edge is hardly surprising given Beauvoir’s stints co-writing with Paul Stanley for 80s KISS records, but there’s a simplicity at the heart of this number that really aims for the gut.  It’s given a lift by a very seventies guitar break from Free, going straight in with a heavy wah wah pedal, while AOR fans will delight in the pop-edged chorus, raised with a multi-tracked vocal and direct hook.  In their younger years, Beauvoir and Free could be relied upon for a couple of corking gentler numbers and in this respect, ‘Never Give Up’ (surely testament to these hardworking musos) doesn’t disappoint.  Taking a clean acoustic base, and adopting a few more vocal filters, this number presents itself in the solid acoustic pop mould – heavy on some really infectious yeahs – before Free tops everything with a smooth bluesy lead.  Those looking for something less drippy will almost certainly enjoy the simple, driving rock of ‘Cold Dark December’, a number featuring one of the finest riffs in Free’s repertoire at the time of recording; it’s a number bringing a great tone, rich in appeal for those who like the heavier end of the AOR spectrum. ‘She’s a KO’, meanwhile, is another hard rocker with plenty of melody and harmonious hookline; pretty much the kind Beauvoir has made a staple over the years, whether as a member of a band, a hired songwriter or a solo performer.  While not necessarily one of the album’s more memorable vocal performances all told, the strong hook and melody wins out.  [At this point, it’s worth mentioning his ‘Drums Along The Mohawk’ LP from 1986 is also essential listening for the melodic rock fan.]

While the fact that both Beauvoir and Free handled all musical duties here without outside help probably helped their friendship gel at the sessions, it’s a shame they didn’t think to call upon one of the hundreds of fantastic session drummers out there.  Even so, the flat sound in the rhythm department it is more than made up for by a near-faultless collection of songs.  Beauvoir is in fine voice throughout; Free is on hand for chunky melodic riffery, and between them, they manage to reignite plenty of their old magic.  There’s so much here to recommend the discerning melodic rock fan, but for those who always enjoyed Crown of Thorns, ‘American Trash’ is an essential listen.