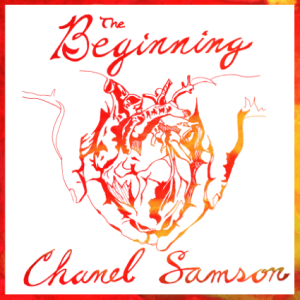 With her live act, The Chanel Samson Circus, Ms Samson blends music and burlesque visuals, juggling, glitter and a whole other bunch of stuff besides.  On record, you can’t experience most of her act, obviously, so anything that may be winning over her audiences is largely lost on this EP.  So, without the bells and whistles, what do we have?  A bunch of pop-rock songs with retro elements that are (mostly) well arranged…with fabulous horns and occasional chunky guitars creating a relatively big sound.

That might sound interesting, but there’s a huge catch.  For any piece of music that may bear a passing resemblence to The Brian Setzer Orchestra, The Royal Crown Revue, or perhaps even slivers of P!nk or the much missed Dance Hall Crashers, delivered from an arguably talented bunch of session musos, you’ll have to suffer their ringmaster.  On this short collection of recordings, Samson asserts herself as an overly confident performer who sings with a horrible affectation and writes smug lyrics about breakups, old men and other things that have irked her.

Lead track ‘FU Matthew’ mixes horns and rolling piano with a strong drum line, resulting in pop rock that sounds like the twee pop of Voice of the Beehive colliding with the sneering bitchfest of Dance Hall Crashers.  The band are strong – the horn section especially – but the music is so at odds with Sampson’s 1950s trill, it’s a bit off-putting.  As the band gets loud, she retaliates be becoming louder still.  Subtle as housebricks, dumb as hell.  Her ex-boyfriend baiting has surely got to be aimed at a youth market…it seems almost unbelievable that anyone with an ounce sophistication would be taken in by something so unoriginal.  Throwing a bunch of 50s easy listening quirks into the bargain really doesn’t make it interesting.   Moving on, the band rattle along apace during ‘This Old Guy’ with more great drums and another full compliment of horns, but the half-decent melody always plays second fiddle to the horrible tale of going out with the titular old man told with an annoying and loud vocal wobble.

By track three, ’Little Red Dot’, she’s resorted to breaking out old swing melodies and a ukulele.  Ukuleles are so uncool.  They always have been.   …And this throwback to the early 50sdoesn’t need a ukulele.  In terms of swing, it’s far more in keeping with traditional sounds than the previous tracks but rarely played with any of the gravitas of masters like Brian Setzer, or even Jools Holland and his Rhythm & Blues Orchestra.  Samson’s delivery perhaps suits the material a little better but there’s still a sense of her needing to rein it in; the only saving grace here is a full and warm bass sound, but by the time that disappears for pre-choruses and the vocal shifts up a gear, urge to hit the skip button becomes very strong.  Lastly ‘Worth The Gold’ gives those horns another workout on a tune that sounds like a post-modern, ironic take on the grooves from the BBC light entertainment department – as is oft the case – the whole band work their arses off – while Samson wails at full belt.  As with Samson’s other performances, she demonstrates the potential of a strong voice – just not always the most appealing voice. If you like the style, the tune has some reasonable bits – but you’ll find stuff that’s just as interesting elsewhere and from acts whom often don’t feel the need for a supposedly comedic slant.  [Check out any number of acts labelled “dark cabaret”]

This EP is well produced and has some musical merit, but Samson’s curly, over-stressed voice and choices of subject material often kills any charm the music had.  Is this a comedy act? If it is supposed to be funny in an old music hall kind of way (albeit updated with bad language), it really isn’t.  If somehow you’ve found Samson’s 1950s pastiches performed with the subtlety of a foghorn endearing, like the Puppini Sisters, anything endearing won’t remain so for long. Sometimes there’s a sense of a performer trying too hard to leave a lasting impression…this is very much the case here.  Proceed with caution.