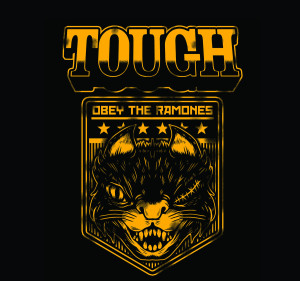 No surprises that the core of the release’s sound borrows heavily from a Ramones influence – the title alone bares the fact boldly upon its sleeve – but the tunes are tough [no pun intended] and about as well played as you’ll find from Tough’s chosen brand of punk-pop sounds.   From the outset, the three-man crew of Chris Polecat (v/b), Stefan Eno (g/v) and Biso (d) really mean business.

The opening chord flurry of ‘Love Me Tonight’ is torn straight from the Ramones copybook, though Tough – being arguably better singers (though never as distinctive as Joey) – lend the tune a quasi-melodic edge thanks to an increased focus on harmonies. Combining a timeless punk stance with a carefree, pop based chorus, they’ve already got the main bases covered to a degree that could be compared to Green Day circa ‘Dookie’, but each of the musicians brings something great to this ninety two seconds, especially Biso, who’s approach to the drum kit is particularly tight.    ‘Hey Mary Lou’ is even tighter, faster and gives a firm thumbs up to Riverdales via a joyous, bubblegum tinged hook, but the Riverdales influence burrows even deeper, particularly during the second half as the riffs subside and a full compliment of drums takes over.  As before, the clear and tuneful vocals also provide a great appeal.   For those looking for speed and aggression as opposed to the poppier moods, ‘I Don’t Like You’ is a speedy, riff-heavy tribute to the sounds Screeching Weasel built from a Ramones template. In this case centring everything around a trashy riff and a dual vocal – the contrast between Chris’s clean style and Stefan’s rough around the edges response providing the number’s centre point.   Each of these numbers should certainly bring something of great interest to lovers of punk-pop.

The best of the bunch is saved for last.  ‘Too Ramone To Die’ not only pays hefty tribute to Johnny Ramone’s much-loved chord structures, but name checks the band in a most obvious way while simultaneously giving the nod to one of “the bruddahs” most overlooked LPs.  In keeping with the blueprint here, the chords are as tough as those on the Ramones’ own ‘Durango 95’ or ‘Wart Hog’ but played at lightning speed, with Biso’s drumming an integral part of the ensuing punky frenzy.  Another melodic, clean vocal sits out front and centre thus giving the number its main aural thrust, the repeated refrain of the title proving to be particularly inspired in its dumbness.  Just as quickly as the track began, it makes its exit as abruptly…and in just 1:20 its all over, leaving the listener hanging in the silence.  Top class.

It’s more than fair to say you know exactly what you’re getting here.  If you love the Ramones – or more specifically, some of the bands they left in their wake – you’ll love this.  This EP is a near essential collection filler for fans of this particular ouvre, but particularly for fans of The Apers or Dan Vapid & The Cheats.