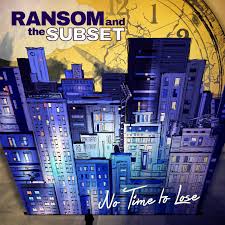 Hailing from Seattle, Ransom and the Subset borrow from a variety of bands to create their musical canvas.  Rather than sounding overtly plagiaristic, their debut release ‘No Time To Lose’ merely celebrates many different pop and rock styles, creating an eleven track musical journey that’s sure to connect with lovers of post nineties power pop at some place along the way.  The fact that it borrows so heavily from classic influences is no surprise when taking into consideration that singer songwriter RanDair Porter has called upon Ducky Carlisle (The Major Labels) and Brian E. King (Oranjuly/Parks) to bring these songs to life.  Neither producer/multi-instrumentalist is exactly shy of tapping into the past for key inspirations and  King’s Oranjuly project, especially, proved a fantastic exercise in celebrating pop’s golden years, resulting perhaps even one of the finest one-album bands ever.   All the studio help/arranging in the world would be of no use, of course, if the band weren’t up to scratch…

An instant stand out, ‘Questions’ develops a strong melody around a fat bassline and rollocking piano part.  The distinct lack of guitar – at least at first – draws an obvious parallel with the earlier works of Ben Folds Five, with the opening line “leave her alone, you’ll only make her high” only serving further to suggest this would be a Folds-esque tune. It very quickly becomes a very different animal, however, and from the second verse onward, the sound swells into something much bigger. While the bass and piano are still dominant, the addition of plenty of harmony vocals and a mellotron tips the scales farther towards the work of Fountains of Wayne.  There’s no problem with that, of course, and the multi-layered sound here is one that gives something extra on each listen.  ‘When Will I See You’, meanwhile, powers ahead in a very upbeat fashion with an intro of rolling drums and hard guitar chords.  Quickly settling into an indie-pop jangle with a hugely confident stride, the tune showcases the talents of King, whose bass sound is presented at the front of the mix [Note: Brian E. King played most of the guitars and bass on these recordings, but the final line up of the band employs Rene Guist and Jon Momolo, respectively.]  The bouncy tune also makes great use of its earlier guitar chords, each hard strum ringing out with a bell-like clarity.  Bigging up a few older influences, a squirly analogue keyboard solo brings 80s new wavish quirks, while a clean toned guitar coming together with a barrage of vocals at the track’s close shows off the influence Brian E. King possibly had over the structure of the arrangement.

‘Leaving With You’ brings more strong hints of early Fountains of Wayne throughout, most notable in their unashamed sun-filled hooks, but here R&TSS’s full-on nineties power pop sound can be found colliding with something from two decades earlier – namely some tough staccato riffs, shamelessly borrowed from The Cars and used to maximum effect.  As with most of these numbers, the use of multi-tracked vocals and blooming harmonies lifts everything from good to potentially great.  It’s nineties power pop 101 – and often easy to spot where R&TSS summoned their inspiration, but very enjoyable nonetheless.  If a few of the key changes and sugary flourishes during the rather pointy ‘Sticking Onto You’ edge (slightly) further towards the Fountains of Wayne camp, it’s with good reason.  This particular track features guest guitar and bass from the Wayne’s own Jody Porter – his bass playing, in particular, a fine feature with its warm and unfussy sound.  Interestingly, despite the inclusion of such a high profile guest, the track is one of the album’s weakest: the tune is stellar – bass, ringing guitars and handclaps, all jubilant – but the chorus, reliant as it is on just the one line, is noticeably lacking compared to a few of the others.  That said, the dumb repetition eventually becomes somewhat of an earworm.  Lead single ‘Anna’ begins in a more low key manner as a few reverbed guitars strum, before a big explosion of drums marches the track forward into a mini-explosion of alt-pop.  Swirling organs and chiming guitars come together excellently, over which RanDair’s voice tackles selection of partly crooned notes – occasionally helped/marred by a few filters.  Looking deeper, it’s another tune that allows each band member a reasonable amount of time in the spotlight – there’s some top work from the rhythm section especially – so, somewhere beyond those mildly irritating filters, there’s still a lot to like here.

Cranking the energy for the fun pop ‘n’ roller ‘Girl I’m Not Afraid’, a blend of acoustic and electric guitars paves the way for a tune that’s spiky but wholly accessible.  Somewhere behind a slightly distorted vocal, there’s a Barenaked Ladies-esque wobble in RanDair’s delivery, whilst a strong chorus hits home from first listen and a twangy guitar solo borrows a little from Dave Edmunds’ late 70s work.  These things combined show off a broad range of talents – thus making this another key moment in ensuring this album will return to your stereo on a regular basis – but the inclusion of a few shameless “ba-ba-bas” and handclaps on an unexpected bridge ultimately act as this number’s real suckerpunch.    Great pop comes in all sizes and this album is not all sunshine and flowers, as ‘Baby Cry’ proves.  Echoing guitars coupled with clopping percussion and vibraphones results in something quite beautiful, not too far removed from a couple of slow numbers from the Oranjuly record. Tugging at the heartstrings with a Brian Wilson sense of the melancholy, it shows Porter is just as adept at the thoughtful when it comes to composition.  While a mere pretender compared to Wilson’s own ‘I Just Wasn’t Made For These Times’ or ‘You Still Believe In Me’, if viewed as homage, it’s quite lovely.

Porter’s songs are constantly strong and the arrangements – with huge thanks to Carlisle and King as studio hands, plus a talented band – are even stronger, ensuring ‘No Time To Lose’ is readymade to connect with lovers of feelgood sounds everywhere.  Despite a few unnecessary vocal filters, these tunes are on a par with many great pop rockers from the 90s and beyond…and with this release, lovers of Fountains of Wayne, Oranjuly and Silver Sun may find themselves a new favourite band.