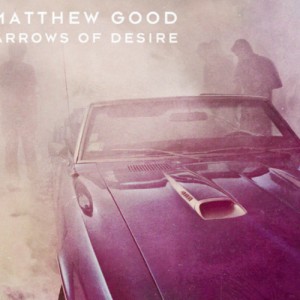 Matthew Good’s 2013 release ‘Arrows of Desire’ is the Vancouver-based singer/songwriter’s seventh solo outing [and eleventh studio album overall, counting those fronting his eponymous band] and yet it seems as if he’s hardly made any waves at all in the UK.  In his homeland, The Matthew Good Band were/are big news, and yet prior to the release of ‘Arrows’, Mr. Good’s UK shows were in front of a rather intimate, select crowd.  However, it seems that those in the know really get him – and for those who do, this is an album that does not disappoint.  Years of honing his talent has resulted in a striking disc, the first half full of huge riffs and simple hooks, the second more cerebral, which combined leads to a hugely entertaining listen.

The title cut leads things off with a piece of absolutely solid alternative rock; a tune with some hefty nineties influences.  Huge chiming guitars collide with Good’s vocal, his attack both strong and distinctive.  While the music is designed to appeal to so many alt-rock fans, as before, Good’s voice isn’t always the most appealing, his warbling tone resting happily somewhere between his similarly underrated peer Matthew Sweet and Family’s Roger Chapman.  Despite this, his sense of presence matches the music well enough.   Beneath the guitars, a simple bassline anchors everything with an almost nostalgic feel, very much echoing the 90s. After quieter beginnings, ‘Via Dolorosa’ follows in a similar mood, but while it often sounds like a quieter, more accessible offering, it soon reveals itself to be surprisingly tougher, thanks to a simply pounded drum on the louder parts, combined with a lyrical sneer.  While more than a one line chorus should be expected from a songwriter with as many years in the bag as Good has knocked up, the one line here allows the more extreme edge in his voice to sound almost venomous.  If some may find the repetition a little empty, some solace will surely come from the sharp guitar parts layering parts of the tune – particularly during the closing moments.

‘We Had It Coming’ ups the alternative rock elements even farther, where against a starker backdrop, Good spits his lyrics with an almost scattergun approach. Their yelped syllables come very much in the style of Frank Black – so much so, it is possible at one point to imagine them morphing into lyrics from the Pixies classic ‘Bone Machine’ [“I was talking to preach about kissy-kiss” comes to mind almost instantly].  The sparse instrumentation only serves to make this tune sound even harder – and always in a good way – before the appearance of another rather repetitive chorus.  The chorus is a little Pixies-lite too, even if the lion’s share of the instrumentation sounds far more in keeping with a more run of the mill 90s indie-rock band.  Overall, this is a top number – big on attitude, high on energy – and although its influences may be rather obvious (intentional on Good’s part or otherwise) this sounds so much more vital than lots of other alt-rock at the time of its release.  After three numbers that fire on all cylinders, some may expect Good to take a breath… Nothing doing, as he ploughs on at full pelt through the angry Matthew Sweet-esque ‘We’re Long Gone’ – a fine power pop/alt rock hybrid, lifted by a touch of rockin’ piano – before offering the listener ‘So Close’, a more ordinary, 90s inspired slab of rock in the LOUD-quiet-LOUD mould.  While neither is particularly striking – or representing anything particularly new for Good or his chosen musical slant – both numbers are flawlessly executed.

Taking on a slow and darker mantle, ‘Garden of Knives’ kicks off the album’s much deeper and darker second half.  A number intense in its spookiness, it represents one of the times on this set of material where Good’s vibrato-led tones sound at their most fitting; his voice sounding slightly menacing as he warbles the chorus lines.  Adding to the impending doom, dense keyboards take on the role of an electronic string section, while the wall of feedback bringing things to a close is measured, yet still edging towards the intense.  These things combined lead to this number being one of the album’s best. Following a collective drone, the band crank headlong into ‘Mutineering’ via a chunky riff that’s both domineering and slightly lumbering, again, with excellent results.  During quieter voices, Good’s voice adopts a familiar tone of wobbly yet accessible – bringing unavoidable comparisons to the great Matthew Sweet once more.  The way his voice slides from the gently unsettling to moderately pained continues to impress throughout the number, and while this isn’t always as musically hard-hitting as some of ‘Arrows of Desire’s earlier material, its almost bluesy nature really works.

Throughout the solemn ‘Hey Hell Heaven’ and ‘Guns of Carolina’, Good proves farther that while he’s in a strong position cranking out loud alt-rock, it’s when wallowing in the more solemn arrangements he really comes into his own. ‘Guns’, especially, nears being an unmissable experience, with an amazing contrast between a dirty lead guitar and crisp, clean rhythms. Closing this selection of light and shade, the near seven minute ‘Letters In Wartime’ provides a suitably epic final statement.  Following a short foray into echoed and empty sounds with a few vocal treatments, guitars crash in with a huge chord pattern. It seems typical of so much of the second half of this record, yet somehow bigger sounding.  As before, Good’s unsettling delivery is so well suited to the material, but here, the best moments come from the instrumental passages:  as well as bringing all of his previous tricks to the table, there’s a echoing brilliance and near climatic approach that occasionally hints at the likes of ‘Drown’ by The Smashing Pumpkins.  Awesome stuff.

For some, Good’s slightly warbly vocal style could be off-putting, but if you can make it past that, like so many of his prior works, ‘Arrows of Desire’ features some superb material.  It may not break much new ground in the alt-rock stakes, but Good’s thoughtful demeanour carries everything with grace, ease and – once the pieces start to fit in the second half – a brilliance befitting such a cult figure.  If thoughtful song writing doesn’t win you over, rest assured ‘Arrows of Desire’ sounds like a damn fine record with the volume knob cranked.