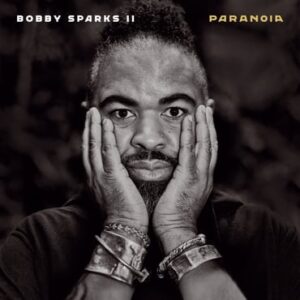 Four years on, Bobby’s second solo album ‘Paranoia’ is even more of a sprawling audio experience where he takes the same scattershot approach as before, and drops a variety of MOBO sounds across a massive two and a half hour journey. Once again, it doesn’t all work, but when it does, it shines a light upon a man with an obvious talent for the eclectic. When it doesn’t – much like Prince and his vault emptying exercises ‘Emancipation’ and ‘Crystal Ball’ – you still sort of have to admire the sheer scope and audacity of it all.

Following a cut and paste intro of samples where various jazz legends get introduced on stages and TV shows – including name checks for Herbie Hancock, Archie Shepp, Jaco Pastorious and others, and featuring the hugely famous voice of Birdland’s Pee Wee Marquette – Sparks drops the listener into one of the album’s heaviest jazz oriented tracks – the worryingly named ‘Musical Diarrhea’. An eleven minute excursion into some very retro fusion with elements of experimental improv, the number opens with a clatter of noise that quickly settles into a mechanised beat, over which a Marcus Miller-esque bass dances and a guesting Mike Stern drops some metallic sounding guitar shapes. The first minute or so openly suggests this will be hard work and possibly aptly named, but things eventually settle into a heady fusion approach that mixes a couple of Miles’s 80s experiments with bits that sound like offcuts from old Stern records, glued together with a shrill keyboard sound. By the mid point, the beats intensify, almost sounding like something pulled from a 90s junglist massive – hovering between speed driven intensities and the purely grating – but Stern is at the forefront doing his best to maintain interest via chopping sounds that resemble audio experiments and cut ups from 80s and 90s fusion, before other passages are led by some truly impressive fretless bass and sax work. Sparks, although very obviously the session leader, takes something of a back seat, merely throwing out synth blankets whenever the mood takes him, but – obviously – he’s got plenty of opportunities to prove himself elsewhere. This is very much Stern’s moment in the spotlight.

Having worn everyone down with intensive jazz noise, ‘Good Morning America’ throws a slow R&B/rap number into the mix, loaded with laid back grooves and synthesized strings. There are flourishes of sound that call back to old Wutang and, for the style, it’s well constructed, but is unlikely to be of even the remotest interest to anyone not already in love with similar sounds. The same goes for ‘Forever Mine’ and ‘Afro Nigerian Girl’ – throwbacks to an early noughties R&B sound that brilliantly put together but have no crossover appeal – or the grime tinged, hard edged ‘Eventual’, where John Carruth speaks almost sermon-like atop quirky beats. These musical diversions and have their place in showing how broad Bobby II’s talents are when it comes to arranging and bringing in various guests to make his musical vision come to life, but for those approaching ‘Paranoia’ for its jazz and fusion aspects, they will probably be a one-time listen.

Far more appealing are a couple of Prince covers. Sparks takes the fragile ‘Sometimes It Snows In April’ and transposes its piano melody to the acoustic guitar. In some ways, the brittle strings give the melody an even greater fragility, but the sparse backdrop is perfect for the vocal supplied by one time Verve Records artist Lizz Wright. Wright’s quiet, deeply toned delivery brings out the pain of loss within the lyric, and her slow and methodic approach to a vocal takes it from a brilliant pop ballad into the realms of (an equally brilliant) easy jazz number. This not only shows Bobby’s knack for reworking the material of others, but shows how the one of a kind talents of Prince Rogers Nelson created songs that were essentially based within a variety of genres. ‘DMSR’, meanwhile, beefs up the original’s mechanised pop heart, and the assembled band supply some extra groove with bigger brass sounds (drawn far more from the Clinton/P-Funk school) and deep beats. Chuckii Brooker’s vocal stretches a little more, too, lending a very R&B slant to the familiar melody, but it really works. With Sparks pulling out a few keyboard sounds that call back to the 80s and “Doctor” Matt Fink, there’s a clear love for the piece in hand, but its best moments come towards the end, when the squirly synths and now hearty brass are augmented by a blues guitar solo. There’s even a place here for a noodling keyboard solo that could be derived from Bob James, such are the vast array of influences pulled into the BSII melting pot of funk and jazz.

Elsewhere, the crassly titled ‘Horny Dreams’ is a mid tempo funk instrumental that – modern scratching elements and vocal samples aside – plays like a couple of old jams from Kool & The Gang and Parliament. The immediately confident arrangement pulls the listener through five minutes of 70s derived brass riffs where the marriage of melody and groove result in one of the album’s finest treats, and on top of all of that, the excellent ‘Letter To Mumbai’ applies jazz and R&B elements to sitar led music and Indian vocals that bridge the gap between traditional and a jazz scat. As with most of ‘Paranoia’s deep cuts, this mightn’t appeal on first listen, but time invested uncovers a strong core melody and suggests that BSII’s musical interests are even more far reaching than his previous musical excursions suggested. At the point where you might think Bobby has run out of curveballs, a fairly straight cover of Elton John’s ‘Goodbye Yellow Brick Road’ showcases vocal talents from Chris Walker, and features a lead guitar supplied by Danger Danger guitarist Andy Timmons. It works far better as a standalone listen, since it completely derails any flow the second disc actually has, but for those looking for a slightly different take on an old favourite, it’s certainly a welcome addition to a sometimes difficult release.

If there’s anything here, though, that warrants a deep dive through ‘Paranoia’s seemingly endless sound collages, its a few brilliant acid/jazz and soul-ish numbers, mostly tucked away on the second disc. Despite only taking up a fraction of this album’s musical interests, when sequenced together, they actually form a solid forty minute listen on their own. ‘Pinky’ sets a Prince-oriented groove in place (think ‘It’s Gonna Be A Beautiful Night’ meets one of the NPG’s punchy horn-led jams), before veering off into jazzier climes where a swirling melody (almost drawn from a 70s film score) underpins various wibbly keyboard sounds and traces of Return To Forever. Eventually, the melodies subside and the assembled band – now featuring Dennis Chambers on drums – work with a repetitive drone and heavy jazz vibes. Chambers clatters around, part structured drum solo, part free form rhythmic powerhouse, and it isn’t always easy going, but his indulgences have the positive effect of making the Prince derived core melody sound even stronger upon its return.

‘Sodom & Gommorah’ supplies another more inventive piece where dancing piano lines jar against quickly parped sax notes and a wheezy brass section. There are moments when the looser brass becomes a little too free, especially in the case of a honking trombone, but Sparks is often able to bring everything to a central melodic point via some sharp piano, whilst those hoping for something a touch more intense should be able to hone in on some frantic bass work. ‘Reaper’ – another potential stand out – combines jazz brass, soul/funk beats and a mellotron-esque drone to expand on previous jazz fusion/soul sounds with a street element that calls back to Lalo Schifrin scores and Yusef Lateef’s late 60s work. As if often the case, though, this is far more than the sum of its influences and those looking for great jazz fusion will definitely find it here, especially once a deftly played baritone sax begins to weave a path between the heavy keyboard sounds. A little more marginal, ‘Yo Yo’ (featuring the legendary John Scofield) takes a groove laden beat and uses that to drive a solid rhythm, over which melodic guitar runs and noises like stretched rubber bands do battle with a tune that occasionally sounds like an obvious extension of ‘Letter To Mumbai’. Although a little more challenging – especially by the time a reedy sounding trumpet solo rears its head – there’s still a strong melodic heart during the number’s best moments. The way Scofield’s distinctive guitar lines work against a mid tempo R&B-ish beat makes it something of an interesting departure for the guesting guitarist, but his ability to be unfazed when dropping a few fuzzy chords and riffs between muted trumpets and mechanical beats is clear. He makes it all seem effortless, and with Sparks reintroducing an influence from some of Herbie Hancock’s work from the late 90s/early 00s as well as a few elements from a couple of this album’s more guitar driven affairs, this is definitely one of the tracks that gives the scattershot album something that feels a touch more pivotal.

Slowing down, ‘Jamie Starr’ – another obvious tribute to Prince, even if in name only – mixes classic acid jazz basslines with bright sounding keys and strings. A fine soul/jazz hybrid, it works purely through thinking of a melody first and foremost. The way Sparks has arranged subtle string sounds beneath the luscious groove in a way that harks back to old Barry White records gives this a very retro appeal. Repeated listens don’t necessarily uncover any hidden quirks – this really is all about melody – but they certainly reinforce any early feelings that the slow and very simple approach is a winning combination. Obviously knowing this, Sparks takes the opportunity to slide from this number into the equally soulful ‘Love’ which, again, takes cues from the instrumental heart of White/Love Unlimited and even a couple of old, mellow Crusaders tunes. This becomes a showcase for some tasteful piano work contrasting with some very 70s pitch bending synth, but that in itself, creates some brilliant laid back jazz by the time it hits its stride somewhere around the mid point.

It’s certainly not by accident, but ‘Paranoia’ is a genuine curate’s egg – an album that knows it isn’t designed for end to end listening. It sort of expects the listener to plough through and find their own gold; their own forty minute treasure trove of musical treats. And obviously, depending on your musical persuasion – your mood on the day it hits the CD player, even – that could vary wildly. Approach cautiously; expect nothing. That way, this will definitely greet you with various musical rewards, provided you can spare the time.