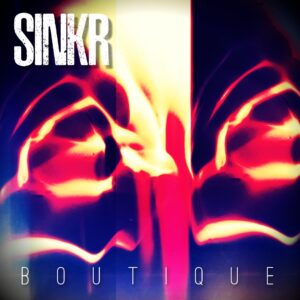 Manchester rockers SINKR make no secret of their love of 80s and 90s alternative rock. Those who broke into the mainstream are obvious touchstones for the band’s core sound, but listeners who immersed themselves more deeply into the indie rock scenes of the era will certainly hear a couple more melodic influences cutting through their debut recording – intentional or otherwise.

The lead track ‘Boutique’ is an immediate throwback to the glory days of 1993. The heavy bass and groove-laden rhythm have direct links with the darker moments of Therapy?’s ‘Troublegum’ and ‘Infernal Love’ albums which, when tempered by extra layers of guitar influenced by US alt-rock bands, creates a really full arrangement. Throwing themselves head first into the riff, SINKR immediately set up a forceful sound, and Its familiarity is such that fans of the style will find themselves absorbed into a world of memories almost immediately. Via a chunky riff, and some solid bass work from Neil, it’s clear from the off that the trio are solid players. The way the ringing guitars mesh with the drums on the noisier moments is very natural, and the overdriven riffs compliment the vocal very well, before a shrill solo cuts through the groove, lending an extra layer. Something a bit bolder than a one-line chorus would have made it better still, but it’s a solid opening statement. As great as the music is, this tune’s most striking element comes via Simon’s vocal. Instead of opting for the obvious sub-Cobain drawl in the vein of Silverchair and so many others, his voice carries a melodic indie sound, driven by an unexpected bleat that gives his performance a true sense of character. It’s almost as if Feargal Sharkey has stepped in for a session with your favourite 90s alt-rockers and although that might take a couple of listens to fully adjust, his extra twist cements this as a tune that’ll compliment a great alt-rock playlist.

The b-side ‘Where’s The Sky’ is actually better and surprisingly catchy. It kicks off with a chugging riff that immediately casts the listener back to the more melodic end of the grunge scene with echoes of Tad, but as the tune gains momentum, there’s so much more at stake. This indie/grunge hybrid gives the whole band plenty to work with, mixing the slight grunge with the dark tones of bands like Catherine Wheel, before shifting into a massively melodic hook that could’ve been pulled from the world of the short-lived and overlooked Mother May I, themselves lovers of Pixies and Bivouac. Applying Simon’s easily recognisable vocal style to another simple hook where the title is repeated for maximum impact (this time, the one-line approach actually suiting the material better), this becomes an earworm in record time. With parts of the tune driven by a very heavy tom (courtesy of drummer Keith) and room enough for an unexpected turn via a lead break that starts out with a vague set of rock ‘n’ roll chops before dropping into something more alt-metal influenced, this is a very well balanced yet full sounding number.

With this pair of tracks, SINKR not only announce their arrival in style, but with tunes that feel as if you’ve always known them. Familiar as it all may be, the performances retain more a sparkle of excitement which promising so much more for things to come.