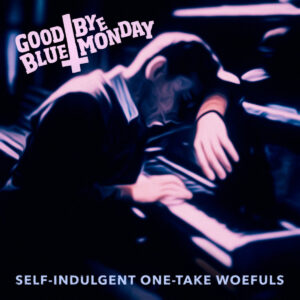 The greatest thing about the stripped down material on ‘Self-Indulgent One-Take Woefuls’ isn’t that its spaciousness allows a greater examination of the lyrics, but rather more that the band have set about re-arranging a couple of the songs so dramatically, you’d hardly recognise them. The best performances throw the unsuspecting listener into a world of sad piano; a world that feels as if Goodbye Blue Monday are playing to a socially distanced audience of two – in an attic. The should-be classic ‘Misery Punk Ruined My Life’ is taken at an almost funereal pace, with mournful chords slowly underscoring a vocal steeped in sadness. By about thirty seconds in, it’s so hard not to be reminded of Paul Buchanan’s beautifully melancholic ‘Up Here’ album from 2014, and the way the demo-like recording gives Graham’s vocal a natural echo more than reinforces this. As the song progresses, rarely shifting its pace or mood, the listener is drawn in even further by its genuine intimacy, and the fact that the solo performance throws a spotlight onto the performer’s natural accent really adds to the natural sound. A track from the earlier ‘The Sickness, The Shame’ EP is recreated in a similar way and, again, the solo piano approach really offers a very different insight into the material, and the use of hard, bright piano notes even gives a sharp contrast to the acoustic ‘Misery Punk’. As before, though, the vocals are brilliant in their one-take natural state; the rawness of the performance lends all the energy that’s necessary and Graham sounds entirely comfortable despite being so exposed.

A combination of piano and acoustic guitar provides the heart of ‘Don’t Tell Me’, casting the core of GBM as the kind of singer songwriters that would have graced Eddie’s Attic in the early 90s. Again, it’s amazing how well they take up this mantle, with Lough belting his lungs against a semi-sparse arrangement. The guitar obviously allows everything to be closer aligned with the song’s punk origins, but by stripping it down to make the voice and lyrics the biggest focus, it becomes more of an underground emo mantra. It’s none the worse for that; in fact, in their quest to bring you even “sadder versions of sad songs”, it should be considered a rousing success. Rounding out the EP, a reworked ‘Worst In The Mornings’ plays far more like something you’d expect from a live and acoustic EP when jangling guitars and rousing gang vocals collide to create something that sounds like Goodbye Blue Monday have visited BBC Radio Scotland for a studio session. Despite taking the most obvious approach, its energy and spirit is a good contrast to the other far more introspective work, even if the lyrics still cling on to the realities of the daily struggle. If you’ve spent a reasonable amount of time with the electric version previously, this will certainly be a welcome and pleasing alternative.

It’s fair to say that if you’ve enjoyed Goodbye Blue Monday’s work in the past, you’ll certainly want to hear this – first, out of curiosity, and then hopefully as an enjoyable release in its own way. More importantly – and this could help raise the band’s profile with the help of the free download – you don’t have to be either a punk fan or in any way familiar with Goodbye Blue Monday’s previous releases to enjoy what’s being offered here.