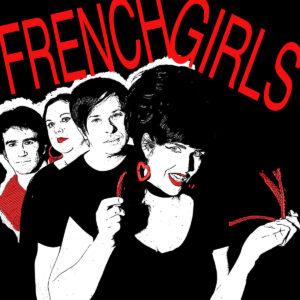 ‘Crazy Yo!’ opens with a 60s inspired, semi-jangly riff that instantly lulls the listener into thinking they’re in for an easy power pop ride. It’s only a few seconds before the distortion gets cranked and applying an equally distorted vocal, Che Beret leads the band through a two and a half minute tour de force of fuzzed up noise. The results are incendiary; the main riffs come with a really sharp edge which sound great when placed against a semi-distorted dual vocal, and although the core sound resembles something very familiar, it still manages to be exciting. The original jangle wasn’t a red herring, either – reappears as a backdrop for a mid section where a spoken interlude appears to take a swipe at ‘Leader of The Pack’, very much helping French Girls draw a wonky parallel with a classic pop past, even if their chosen delivery often rallies against such obvious melodicism. The two minute belter ‘Aerobicise’ manages to be even tighter when applying an East Bay Ray styled surf-punk lead guitar against a chopping garage riff. It’s definitely a musical highlight, showing off the musical chops of Jean Jacques Clouseau III and Michel Ouioui at every turn. The performance is driven by the same spirit as so many of the great releases from the King Pizza label, while clinging on to a sound that seems to take a small amount of influence from ‘Pink Flag’ era Wire. With that complimented by an equally spirited vocal where Che snarls and yelps throughout, a brilliant and almost brattish listen is pretty much guaranteed.

For those looking for something a little punkier, ‘Frankenweenie’ should more than hit the mark, thanks to a jagged rock ‘n’ roll riff played with amps cranked to eleven. A cross between the rougher end of mid-80s Ramones and ‘Night Shift At The Thrill Factory’ era Mr T., the track almost values a riff over everything else – and, indeed, any vocal hooks aren’t as sharp as ‘Aerobicise’ – but that isn’t to say Che isn’t in great shape vocally. It’s the sound of a band entirely comfortable within their garage/punk sound, and for fans of the style, it should pass a couple of minutes’ worth of great entertainment. With a rougher quality, ‘Soda Pop’ combines punk ethics with a noodling guitar lead (half buried in distortion) pushing French Girls further towards the sounds of The Donnas’ self-titled debut from ’97 – something made almost unavoidable by the inclusion of a trashy hook likening a boy to the titular soda. While its a good performance in its own way, it feels a little too much like French Girls settling into a by-numbers approach to their music, before the digital bonus ‘Make Me Die’ kicks everything back into high gear with a burst of distortion and kind of angry vocal that is an equal match for anything else within the French Girls catalogue. The loud repetition of the title provides the most direct hook, which backed by aggressive chopping chords creates some suitably angry garage punk. The fact that this is done and dusted in a little over a minute only adds to the general edginess.

Recorded live to tape in a studio environment, this EP is a genuine blast of excitement. Always valuing energy over perfection, it supplies ten minutes of punky garage rock where the core of ‘Salt Lick’ era Red Aunts collides with the roughest bits of Cheap Gunslingers; a listen where sharp guitar riffs pierce through angry vocals. On first listen, it may seem generic, but pretty quickly, its relentless pace and shamelessly raw edges begin to sound really vibrant. In garage punk terms, the ‘Franch Girls’ EP is a must-have.