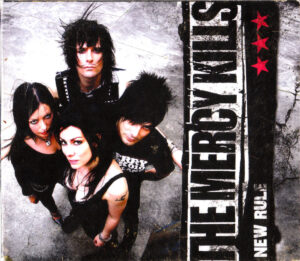 Their unrestrained punch is best demonstrated on lead track ‘I Wanna’ where synth pulses and a driving bassline take the song’s verses into the realms of Orgy, while the chorus and more melodic elements suggest a love for Velvet Revolver. It’s perhaps the track that most clearly shows how the push and pull between traditional rock and something more alternative gives The Mercy Kills so much of their spirit. Factor in a shouty, almost anthemic chorus and it’s very easy to love from first listen. Almost as strong, the title cut combines some of the post-grunge heaviness of bands like Fuel with a trashier aesthetic – something that creates one of the best riffs when Nathalie Gallé fills space with angry slide work – and Mark E’s vocals suggest something a little more threatening. With a strong verse set in place, things improve further with the chorus where Mark’s shoutier aspects are effortlessly countered by guitarist Jen in a call and response style. Although the main hook isn’t as strong in itself, everything leading up to it – and surrounding it – shows The Mercy Kills in great shape. In barely three minutes, this number is the perfect showcase for most of their musical traits.

The rest of the EP isn’t quite as immediate, but there’s still a lot to enjoy. That doesn’t necessarily include ‘So Many Times’, however. Most definitely the weak link here, a fantastic hard rock tune that isn’t a million miles away from Duff McKagan’s Loaded is quickly derailed by some especially tuneless wailing. Despite Mark’s best efforts, he doesn’t completely wreck the track, although things come dangerously close to being unlistenable in a couple of places… Assuming you can make it through the first couple of minutes, the second half of the number still shows why The Mercy Kills have so much potential, when a brilliant vocal refrain featuring three different voices battle it out against a busy lead guitar riff which desperately wants to be Angus Young bursting into ‘Thunderstruck’. As a snapshot of a hard working rock band capturing a lightning bolt of an idea, this is superb; it’s a great shame it couldn’t have been used to create a thrilling climax to a much better track.

Released as a video single ahead of the EP ‘Fall’ captures a lot of the band’s stronger elements, even if it never quite hits that musical home run, figuratively speaking. The opening bars set up an almost tribal groove via a huge drum sound – again, thrusting the rhythm section into the spotlight – before whirring and grinding guitar sounds add something a little trashier. A barrage of crowd rousing “heys” leads into the first verse where frontman Mark E’s shouty style battles against a shrill guitar part for dominance. By the second verse, The Mercy Kills seem to be waist deep in a world of late 90s rawk; no matter what they throw the listener’s way, though, it’s Gallé’s aggressive lead guitar work that provides the necessary long term memorability. A solid performance all round, it sets the tone for closing number ‘Go’, which appears to bring most of the band’s best moods and influences together, bowing out with a very confident arrangement. This tough hard rocker takes the guts of The Cult circa ‘Sonic Temple’, twists those against something vaguely Murderdolls-esque and then applies a bunch of shouty backing vocals. Nathalie spends half of her performance driving some fine grinding guitar work against a cheerleading chant and the result is a gloriously sleazy sound which might well be The Mercy Kills at their most disposable. It’s none the worse for that, and given their love of all things trashy, its throwaway nature is likely deliberate. If you still hanker after the kind of trashiness served by the the harder end of the glam and sleaze spectrum, or trashy alternative metal, there’s a fair chance you’ll discover a track that stands up to repeated listening here.

‘New Rule’ is an uneven ride, but is worth hearing for ‘Go’ and ‘I Wanna’. There are some rough edges to be found, but when the material hits the mark, The Mercy Kills show off a massive, youthful confidence. Since the band went on to record further material – including a full length album in 2013 – having this EP shelved obviously didn’t seem to cause too much of a setback, but you have to wonder if things would have turned out differently if it had appeared in 2010… For anyone who already owns The Mercy Kills’ ‘Say You Do’ EP or ‘Happy To Kill You’ album, this opportunity to go back in time will surely be welcomed…warts ‘n’ all.