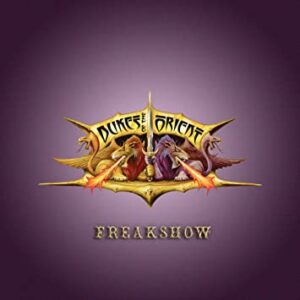 In 2017, Payne found himself fronting a new band, Dukes of The Orient, a huge bombastic beast flaunting massive pomp and prog flourishes, coupled with the big choruses of Asia’s best works. To the casual observer, the Dukes may seem like “John Payne & Some Blokes”, but for melodic rock buffs, there are a few other familiar faces within the ranks. Keyboard player Erik Norlander’s discography is huge. With a plethora of solo albums to his credit, several releases with Rocket Scientists and an important role to play in the post-Dio “Dio band” Last In Line, his output would be impressive even if you discounted the million albums he’s released with Lana Lane (which for the purposes of taste and sanity, we probably should). Guitarist Alex Garcia is also a member of Mayday Parade, and drummer Frank Klepacki – although not a familiar name to rock audiences – has scored dozens of soundtracks for video games.

With massive AOR moments bolstered by proggy keyboard wigouts and songs big enough to sound like musical theatre, the Dukes of The Orient debut (Frontiers Records, 2018) was an impressive work. Between a 70s sense of grandiosity and a shamelessly 80s production, it was almost impossible to date the recording…and in the massively melodic ‘Fourth of July’, they even gave the world at least one song worthy of standing alongside Asia’s ‘Aqua’ album.

Second albums are notoriously tricky. Often made up of bits that weren’t ready for the debut, sometimes even flat-out disappointing, they have so much riding on them. None more so than Dukes of The Orient’s ‘Freakshow’. It surely couldn’t feature anything as lovely as ‘Fourth of July’ or as theatrical and complex as ‘Give Another Reason’ (a ten minute epic fusing the best bits of 90s Asia with ‘Keys To Ascension’ era Yes)…could it?

Well, no, but it isn’t short on good material. Released ahead of the album as a digital single, ‘The Dukes Return’ sets the scene in typically grandiose style. Opening with a keyboard riff worthy of Asia in their full pomp, any nervousness about whether the album will be up to snuff quickly subsides, and once that riff slides effortlessly into a huge melodic rocker with theatrical overtones, it’s obvious that the Dukes have plenty of confidence in their return. This seems especially the case once they find time for a chorus that sounds like ‘Breathless’ era Camel jamming with early Grey Lady Down. With the inclusion of a sax break that’s unashamedly late 70s in its tone and appeal, it’s an opener that brings so much to celebrate. There’s one minor drawback in that Payne’s voice is a little more gravelly than expected – even sounding slightly phlegmy in a couple of places – but that never spoils a really jubilant and catchy melody. The quality holds firm when ‘The Ice Is Thin’ shows off a much grander, proggy stance, with Norlander offering a selection of stately piano chords, over which Garcia teases with Floydian melodies. Once Payne starts to sing, no secret is made of the Dukes desires to create melodies worthy of the rockier end of musical theatre, and with a plethora of harpsichord tinkles and strong instrumental passages, they certainly seem to be playing up their proggier intents. There’s salvation for the AOR crowd too, as there are other moments when this number really excels at aping Supertramp with a world of electric pianos stabbed in a rumpty-tumpty melody while another sax break calls forth somewhat gleefully.

The album then twists its way into something much darker when the title cut works a much heavier – and obviously heavy-handed – carny riffs against a terrible lyric and average vocal. Payne shouts his way through the better part of four minutes, desperately trying to channel a couple of Greg Lake’s performances from back in the day. In some ways this is fitting enough since the whole thing sort of sounds like a tribute to ELP circa ‘Black Moon’ (right down to Norlander’s chosen keyboard sounds, ranging from classic Hammond sounds to some unforgivable atonal parping), but no amount of “knowing homage” will rescue what is, frankly, an awful song. Luckily, the album’s second single restores a lot of faith when ‘The Monitors’ casts Payne and company in their Asia mould, which is still their strong suit. With a far more melodic verse at his disposal, the vocalist reaches inside himself for a much richer performance (more in keeping with the debut album), while the musical interplay between Norlander and Garcia plays up just enough pomp to keep lovers of the band’s bigger sounds interested. It isn’t anything new for any of the players, but between easily likeable melodies and a big hook with an Orwellian lyric, it’s an album highlight.

Reason enough to buy this album, the epic ‘Man of Machine’ is this recording’s crowning glory, with another unashamed 70s throwback where the Dukes go all Alan Parsons. Stabbed AOR keys underscore a superb sax; Payne croons and melodies truly soar. Moving into the meat of the number, it quickly asserts itself as a perfect AOR/pomp hybrid, always driven by Norlander’s work, and whether he’s opting for the AOR stabs or the kind of 80s flourishes you’d expect to hear from Geoff Downes in his prime, you’ll rarely hear him playing better. A long time coming, Garcia’s featured solo drops in the kind of fretboard teaser you’ll have heard on a hundred melodic rock discs, but a lack of invention never detracts from a fantastic tone. Elsewhere, Eric Tewalt’s sax solo is almost as rich as a Dick Parry classic. A tune absolutely overflowing with musical interest and terrific melodies across it’s seven minutes, it’s almost impossible to understand how the same musicians could’ve sounded so laboured and torturous just a couple of tracks earlier.

The downside of placing something as perfect as ‘Man of Machine’ in the middle of the album is that everything is in danger of peaking far too early, but the second half just about brings enough strong material. ‘The Last Time Traveller’ begins with more stately piano and vocal work, almost as if Dukes of The Orient have hit autopilot, but redeems itself midway when the instrumental break hits upon an unexpected prog-funk hybrid. This really allows Norlander to flex some serious musical muscles, before ‘A Quest For Knowledge’ retreats into a comfort zone, this time with a few of the prog flourishes actually getting in the way of the AOR and Asia-ish melodies. There’s a good song here that’s bravely trying to fight its way through the moments of excess, but while a few vocal nods to 80s Yes are very welcome, quite why Garcia’s guitar solo is plastered over the top of one of Mike Post’s old TV theme tunes is anyone’s guess… No, really. It’s one of those double take moments that needs to be heard to be believed.

Naturally, any big prog numbers inspired by the history of the railway are always going to play second fiddle to the much loved Big Big Train, but aside from that, ‘The Great Brass Steam Engine’ is filler of the purest order. It’s essentially a five minute keyboard solo, and while Norlander can clearly play well and the neo-classical bombast bookending the main passages creates an impression on first listen, it’s a definite skipper from then on. It might have been better had he not chosen such dated keyboard sounds – the worst bits almost sound like comedy flatulence – but, then again, maybe not. Pulling the end of the album to a confident close, the pairing of ‘When Ravens Cry and ‘Until Then’ covers a lot of musical ground where almost all of the Dukes best traits are given a true peacock’s parade. With the former moving from pure piano balladry into a strong slice of AOR and back again, allowing Payne to explore almost the full range of his voice, and the latter exploring more of the band’s instrumental prowess across eight minutes, there’s a lot for fans to love. The intro of ‘Until Then’ has a real warmth and familiarity when Norlander obviously tips his hat to Tony Banks; later in the piece he seems to channel a Rick Wright sound (albeit with budgetary restrictions), while Garcia adds lots of tasteful slide work. In terms of vocal, it’s by far Payne’s finest performance this time out, too. Instead of relying on volume, he scales right back, but seems to have a greater presence as he realises less is more. With his richer delivery reinforced by some Floyd inspired harmonies, this really revels in all of its 70s themed wonder. It’s one of those numbers that doesn’t go for bombast, busyness or any kind of flash, but is quite lovely all the same. It’s a near perfect homage to Floyd and their ilk…and perhaps more impressive than Bjorn Riis too, as it is an actual homage rather than sheer plagiarism.

Despite the title track desperately trying to sabotage everything and the album’s other big steamer almost hitting the buffers, ‘Freakshow’ is another strong release from Dukes of The Orient. The best moments don’t necessarily reach the highest highs of the debut, but between the two “singles”, ‘Until Then’, ‘The Last Time Traveller’ and the magnificent ‘Man of Machine’, there’s more than enough to keep fans of the band’s big style entertained.

3 thoughts on “DUKES OF THE ORIENT – Freakshow”