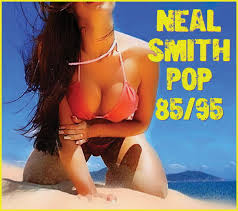 Given that undeniable talent, it seems odd that this collection of songs – recorded between the title’s two given dates – features a distinct lack of real drums.  In Smith’s own words, although he “understood that [drum machines represented] the new wave of recording percussion”, he did not like the fact that most of the people doing such programming weren’t actually drummers, so he set about recording some tracks with drums he’d programmed himself.  On the basis of ‘Fly Home Angel’ which doesn’t rise beyond a plodding ba-doom-tish and ‘Love Can Run, Love Can Hide’ – a tune that sounds like a third rate off-cut from a Scotti Brothers film soundtrack from ’88, again, displaying the most basic of drum programs – you’d have to wonder why Neal was so upset that studio engineers had been programming machines.   These songs – at least rhythmically – show there’s obviously a very different discipline between the ability of matering a physical kit and understanding the best ways of programming a machine…

That might be halfway forgiveable if the songs collected on ‘Pop 85/95’ could hold their own, but unfortunately, the low budget soundtrack approximation of ‘Love Can Run…’ sums up the bulk of the material.  There’s something in the song that sounds like it might have stood a chance in ’87 if handed over to Larry Greene or Kenny Loggins in that its chorus is quite…pleasant AOR fare and guitarist Jesse Jay Johnson shows off some reasonable, if predictable chops but, Smith, in addition to only really understanding the rudiments of a drum machine, also only understands the basic rudiments of singing.  His voice is okay in a man in a karaoke bar sort of a way but he has none of the gravitas you’d associate with being a professional singer.  Some might argue he has more of a melodic edge than his old boss, of course, but it’s all relative – at least Alice was often interesting.

The big selling point for this album is supposedly the three demos recorded for Deadringer, a short lived supergroup reuniting Smith with his old Cooper bandmate Dennis Dunaway and Blue Oyster Cult legend Joe Bouchard.  It’s easy to visualise the finished tracks from these works in progress, but there’s nothing to suggest a band that would set ever the world on fire. The most famous of these songs, ‘Secret Eyes’, had pride of place on Deadringer’s sole LP and the demo shows off an okay song, okay playing and a light AOR sheen, but the nicest thing that could be said about it is that it sounds like a poor offcut from BOC’s ‘Club Ninja’.  The thin and mechanical ‘If I Only Had You’ comes across like a royalty free music version of Berlin and ‘Dying To Love You’ sounds like the work of an 80s nightclub singer re-hashing something from the Freiheit back catalogue while a disinterested crowd munches their scampi.  At the point this track reaches its (supposed) climax with some militaristic rhythms, the demo quality drum machines just grate.  Even with the ‘Secret Eyes’ demo being a cut above the rest, none of the Deadringer demos are worth any more than one listen.

The remainder of the material, rounding up several demos made by Smith and Johnson over several years, are actually worse.  ‘I Love You To Death’ sounds like a cartoon theme tune crossed with limp pop.  Lyrically embarrassing, tonally worse, Smith rattles off a one-line chorus against rigid beats and a fudgy mix of guitars and simple keys. By the time it gets to a bridge where he yelps “I love you I love you I love you” repeatedly, you have to wonder if this is meant to be taken seriously.  He almost seems like the male equivalent of YouTube “legend” Jan Terri.  A lumpen, new wave arrangement drones throughout ‘Distant Drum’, an on half-baked idea that sounds like an extended intro from Simple Minds circa 1989, it’s obvious neither Smith or his writing partner are feeling especially inspired (in which case, why should potential listeners really care?) and ‘I Wanna Be Good But I Don’t Know How’ approximates something Shoes might have binned long before recording a second round of demos.  As terrible as all of this is, it’s got nothing on the album’s closing track.  The absolute nadir of this musical junkpile, ‘All My Eyes Can See’ has designs on being a big, cinematic ballad, but a clanking keyboard, an off key vocal and dreary pacing absolutely strangle the life from anything that may have seemed like a vaguely good idea.  Why anyone would want to listen to this is a mystery and why Neal would consider it worth sharing, an even bigger one.

Released at a time when so many legacy artists are trawling their archives for unreleased demos and alternate takes to flesh out lavish box sets, Neal Smith manages to unearth almost nothing of interest with ‘Pop 85-95’, which is almost a feat in itself.  Between the poor recordings, average songs and terrible drum programming, this release is about as welcome and relevant to 2020 as its incredibly unfortunate choice of artwork.