Brendan has created the perfect video for the song, with visuals that show him wandering around his home studio and playing various instruments.  There’s something about it that actually recalls earlier promo clips by the legendary Paul McCartney and Jeff Lynne, so it appears very apt for Benson’s lovingly retro sound.

Brendan’s return to solo work comes after the release of The Raconteurs’ third album and the release of the new single kickstarts the beginning of a busy summer, even though (much like everyone else) he’s not able to take to the road.  The absence from live shows is replaced by a new weekly livestream series.  You can find out more about the streams in the below press release.  The promo materials also include links to the new album’s three promotional videos. 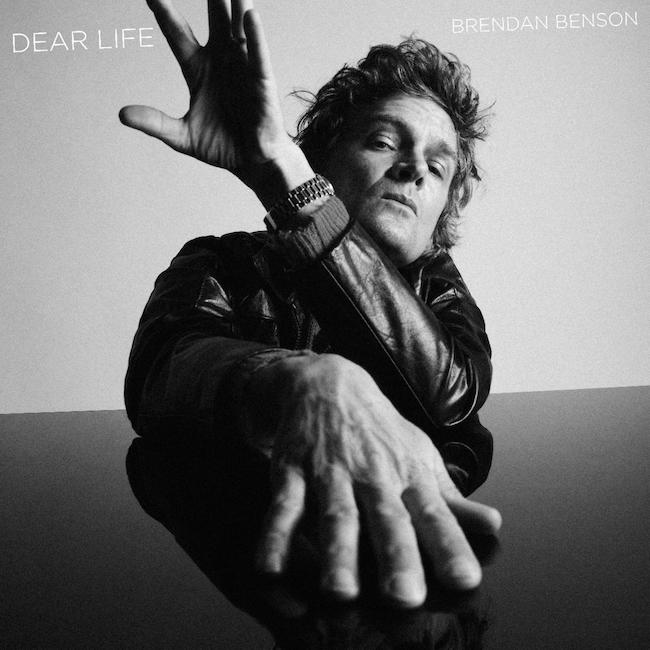 “One of his finest” Uncut
“Something of a rebirth” NME
“A giddy, unpredictable, pop record” Mojo
“A rollicking, life-affirming treat” The Observer
“Impressive stuff” Long Live Vinyl
“A joy to listen to” Louder Than War
“His most experimental release to date” DIY
“Fun, kaleidoscopic and freewheeling” The Daily Mirror
“One of the most unashamed upbeat albums you’ll hear all year” The Daily Star
Brendan Benson has released the video for ‘Dear Life’, the title track from his first solo LP in seven years, out now via Third Man Records.

Benson has also announced a new weekly live stream series called “Off The Road With Brendan Benson,” which will air on Thursdays at 10:20pm BST via his YouTube Channel, starting today. Today’s episode will consist of side A of Dear Life. Fans can count on future episodes consisting of performances of songs from a certain album, answering fan questions, or taking a tour through the creative process.

Benson finds himself in an enviable spot as he enters the third decade of a remarkably creative, consistently idiosyncratic career – an accomplished frontman, musician, songwriter, producer, band member, husband, and dad. ‘Dear Life’ marks this consummate polymath’s most inventive and upbeat work thus far, an 11-track song cycle about life, love, family, fatherhood, and the pure joy of making music. Produced and almost entirely performed by Benson at his own Readymade Studio in Nashville, the album sees the Michigan-born, Nashville-based artist – and co-founder, with Jack White, of The Raconteurs – revelling in a more modernist approach than ever before, fueled by a heady brew of cannabis, hip-hop, and a newly discovered interest in software drum programming. The result is an untapped playfulness that elevates expertly crafted songs like the future funk-fueled opener, “I Can If You Want Me To,” and the ecstatic “Richest Man Alive” with voluble arrangements, elastic grooves, and incandescent power. Imbued with revitalized ambition and confidence, ‘Dear Life’ is Brendan Benson at his very best.

“There’s something about this record,” Benson says. “A friend of mine called it ‘life-affirming.’ I thought it was a joke at first but then realized, well, it’s about life and death for sure. I don’t know if that’s positive or optimistic or whatever, but that’s what’s going on with me”.
# # #
Beginning with 1996’s now-classic debut, ONE MISSISSIPPI – recently reissued by Third Man in its first-ever vinyl pressing and available now – and its masterful 2002 follow-up, ‘Lapalco’, the Michigan-born, Nashville-based Benson has always infused classic craftsmanship with contemporary invention.
Along with his own critically acclaimed canon, Benson is of course co-founder – with Jack White, Jack Lawrence, and Patrick Keeler – of The Raconteurs. The band first convened in 2006, winning worldwide acclaim, GRAMMY® Award nominations, and a chart-topping smash single in “Steady As She Goes,” with their now-classic debut album, ‘Broken Boy Soldiers’. The Raconteurs returned two short years later with 2008’s ‘Consolers of The Lonely’. Like its predecessor, the LP proved a popular and critical phenomenon, earning the GRAMMY® Award for “Best Engineered Non-Classical Album” as well as a nomination as “Best Rock Album.” After more than a decade, The Raconteurs finally returned to action in 2019 with their critically acclaimed, chart-topping third LP, ‘Help Us Stranger’, highlighted in part by songs Benson had initially considered for his own LP, “Only Child” and “Somedays (I Don’t Feel Like Trying).” The Raconteurs’ epic 2019 world tour proved equally successful, playing to ecstatic sold-out houses from Nashville to New Zealand and all points in-between.
As if all that weren’t enough, Benson is an in-demand producer (Robyn Hitchcock, Young The Giant, Trapper Schoepp, The Greenhornes) and collaborative songwriter, with a CV that includes partnerships with Jake Bugg, Iain Archer (Snow Patrol), and The Kooks’ Luke Pritchard, among others.
# # #
CONNECT WITH BRENDAN BENSON:
OFFICIAL
THIRD MAN RECORDS
FACEBOOK
INSTAGRAM
TWITTER
YOUTUBE
# # #
error: Content is protected !!