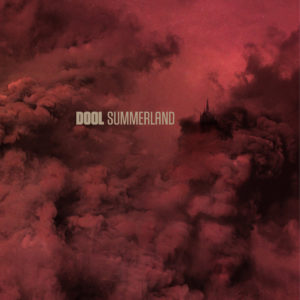 2020’s ‘Summerland’, in most respects, is a culmination of everything Dool have worked towards over the previous five years – it’s a record that shows off almost every musical aspect of the band within its eight songs, but also one that very much waves two fingers at consistency. There are times when the expected heavily gothic sound not only makes its presence felt, but actually that cranks a little more heaviness. At other points, ‘Summerland’ teases with a couple of Dool’s most commercial tracks to date, which is great but also quite perverse, since they claim not to have deliberately tried to curate any obvious radio-friendly material. Somewhere between these two extremes, ‘Summerland’ retains enough easy melodies to please fans of gothic rock and melodic metal alike, regardless of its uneven nature.

The band’s decision to follow their natural instincts comes across quite obviously on the lengthy ‘Dust Shadow’ where, after a haunting intro featuring musical box sounds, Dool launch into a repetitive riff that has stronger connections to doom than goth. This has the effect of filling eight minutes with a musical backdrop that rarely changes, and yet retains just enough variants on a dense theme to maintain interest. Between the heavy-ish chug, you’ll find passages featuring mournful violin sounds, choirs of wordless vocals and, eventually, the kind of guitar solo that you’d be more likely to find on an old 80s rock album than within the realms of a My Dying Bride or Witch Mountain piece. Then there’s Ryanne van Dorst: she’s never been the biggest or flashiest vocalist, but her performance during the louder parts of this epic sounds much stronger than anything she’s committed to tape previously. It might have been nice if she’d given herself something of a more obvious hook to work with – any kind of hook would’ve helped – but as it is, it’s a fairly solid tune.

Also opting for an epic approach, the title cut shows off a slow and moody riff from the outset, setting up a soundscape where clanging tones jostle with a slightly off-kilter melodic counterpoint, creating an especially cold atmosphere. Even once a heavy bass fills the space, there’s nothing warm or inviting about Dool’s chosen sound, and Ryanne’s choice of vocal seems especially haunting. “Could the days become darker…could this last much longer” she asks, her voice almost cracking…and then, as if to save this fragile piece from itself, a heavier riff crashes through, placing Dool somewhere a little closer to a melodic doom act than the seven dozen Nightwish wannabes emerging from Europe on a monthly basis. Although, perhaps, this number could’ve been shortened by a couple of minutes for greater impact, each of its individual elements are great: Ryanne shows off something close to her full range – she’s no Floor Jansen, but it’s obvious she doesn’t need to be; the main riffs are simple yet very effective in maintaining a dense sound and a tough twin lead brings everything to a climax with a very old-school melody, ensuring this never feels like a one-note piece.

An album stand-out (and lead single) ‘Wolf Moon’ finds Dool in a much more melodic frame of mind and almost taking a prog rock approach to goth-ish sounds. Clean and circular guitar riffs quickly create a sound that comes a little closer to that of their debut EP, before crashing into a chorus where van Doorst’s voice gets to soar and brief twin leads flesh out a great sound. There’s something about the guitar tones and unforgiving production style that actually makes this convey the kind of atmosphere present on Rush’s ‘Clockwork Angels’ swansong despite being a different musical style. By the time you’ve heard the chorus a second and third time, it still isn’t enough to make it stick, but there’s something about this performance that really works. It’s very much the sound of a band on the rise. Pulling out some semi-acoustic sounds, ‘A Glass Forest’ manages to blend bits of Alice In Chains’ quieter works with the kind of layered atmospheres the early King’s X made their trademark and throw in something distinctly European to create a tune that’s easily Dool’s finest to date. Stylistically, it’s very different to most of their typical fare, but this shows a band branching out and also shows their ability to create something that finally brings out the best in the vocals. On the debut album, there wasn’t always a great separation between voice and riffs – about half the material presented van Dorst in such a way she almost felt like extra instrumentation. There’s no such worry here. Atop a crisp guitar line, she’s able to present a strong, crying edge to her performance and in doing so, gives the album something more memorable.

Switching the mood again, ‘Be Your Sins’ works a tough 80s muted riff interspersed with some brilliantly cold guitar work – a definite throwback to Killing Joke and ‘Love Like Blood’ – but beyond that, feels a bit too much like cheesy Euro metal. It’s very well played, but there’s a bit too much sweaty leather for it to retain any “cool factor”. This, of course, demonstrates Dool’s abilities in yet another hard rock style and while it’s solid enough for what it is, it’s not necessarily going to appeal to those hoping for more songs in the vein of ‘Dust Shadow’. It still manages to have more balls than ‘Ode To The Future’, though, where everyone wanders through something that sounds like a ‘Touched By Jesus’ era All About Eve track reworked by Lacuna Coil. If you like that sort of thing, of course, it’s great (it’s the album’s most obvious single, even if Dool had other ideas), but for lovers of heavier things, it’ll certainly seem…overly commercial, which is bizarre since that’s precisely what Dool claim they didn’t aim to be during the writing sessions. It’s easily accessible sound might actually create an obvious entry point for first time listeners, of course, or even attract a few ears that wouldn’t have otherwise been interested in Dool’s heavier tendencies, so it’s an interesting experiment and might even be the album’s trojan horse.

Elsewhere, ‘Sulphur & Starlight’ revisits something a little closer to retro goth with everyone in something of a comfort zone. While this mightn’t be ‘Summerland’s most exciting four minutes, it gives van Dorst more than enough of a vocal workout and she sounds rather confident against a ringing guitar. Again, regardless of what you may think of the end result, this shows off a much greater separation of instruments than anything on the debut, so it’s technically sound, while both ‘The Well’s Run Dry’ and ‘God Particle’ flesh out the album with more goth rock/pop/darkness that suggests a love of 80s and 90s alternative music is stronger than ever. Neither will offer any massive revelations, but they show how these guys have been able to bring those sounds and influences into the twenty first century quite effectively.

‘Summerland’ shows, more often than not, a very natural talent and its one that fans of retro goth moods will probably enjoy, especially if listeners are able to lose themselves in the moment and not over think the content. Like ‘Here Now, There Then’, you won’t necessarily remember any of these songs once the disc stops spinning, but since the material always feels as if it’s there to enhance a mood, the sound is more important than the hooks. …And in terms of both sound and presence, Dool have made a massive leap with this second album.