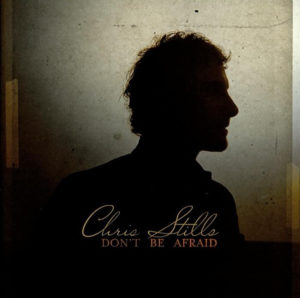 Not one to rush, Chris’s third album appeared in September 2018. Inspired lyrically by the breakdown of his marriage and taking more musical cues from from ‘100 Year Thing’ as well more recent times spent with Ryan Adams, ‘Don’t Be Afraid’ is easily his best work to date. The aching, self-awareness of ‘In Love Again’ gives the album an instant stand-out, where Chris approaches the piano with Randy Newman’s strident style and then blends that with a distinctly 70s inspired balladry, bolstered by steel guitar sounds. The contrast between the nervousness of the lyric and the emotive nature of the music itself is just fantastic. In great voice throughout, Stills rises from a chocolaty and soulful croon right through higher registers, until the point he opines “How could you ever love me?” in a way that anyone who’s been through rocky relationships could so easily relate.

At the louder end of the alt-folk scale, ‘Criminal Mind’ should have plenty of charm for lovers of Ryan Adams – and specifically his ‘Gold’ LP – presenting a simple chord structure that’s given so much of a boost by a great band and great vocal. Quickly marking a place among the album’s finest songs, there’s a timeless quality about the arrangement – the overt Adams-isms are joined by a rhythm section that could easily be Mick Fleetwood and John McVie circa 1977 and, eventually, an overdriven electric guitar lifts everything with bursts of real anger that easily compliment a slightly sneering lyric. Similarly derived from a fantastic rootsy rock style, ‘Hard To Please’ combines a fantastic psychedelic guitar sound with some solid acoustics and a booming lead vocal that, although subjected to slight filtering in places, seems to encapsulate the passion, anger and disappointment within this song cycle, especially when Stills so plainly states he just “needs a second chance” whilst being “lost in a bitter dance”. Like Dylan’s ‘Blood on The Tracks’ decades earlier, the music does its utmost throughout to make the sentiments more digestible to the outsider, but as a listener, you can’t help but feel his fears and frustrastions as he looks to the big changes that have taken place within his life.

In a much busier style, ‘Calling The Underground’ is driven by some intricate finger picked guitar, which is then joined by equally busy rhythms and ends up sounding like a cross between Paul Simon, Mumford & Sons and something Stephen Stills might have experimented with in 1972. Yet another musical highlight, the frantic folk-rock that unfolds is much a showcase for the backing band as Stills himself, and whilst it’s best approached in a happy frame of mind it’s a great listen. ‘This Summer Love’ places an acoustic guitar against a mechanised beat, resulting in something that evokes the 1970s, even though the choice of beats are very 90s. With the mellow music in place, Stills’s voice is almost syrupy and reflective in a way that makes him seem to fill a gap between Jack Johnson and Ryan Adams at his most sedate. It doesn’t push the musical envelope in any way, but with the use of strings and warm acoustic sounds, it’s lovely…and the arrangement brings out the best in a thoughtful vocal. Boasting another of the album’s fuller arrangements, in some ways ‘Blame Game’ seems a little out of place among the more reflective tracks, but a divorce brings anger and it’s great to hear Chris and his band cut looser. The grubby guitars, especially, sound great pushing through with a dirty blues rock style and while there isn’t much of a hook, the power in the lead vocal along with a belated punchy bass-led groove and fuzzy solo make a firm impression.

Delving into 70s singer-songwriter territory once more, the piano and strings of ‘Lonely Night’ set a maudlin mood centred around harmony vocals, before Stills quickly steers everything towards something that could easily be an old Billy Joel classic, with a selection of bouncing pianos and very forthright vocal. Those who enjoy 70s derived pop-rock will certainly find a new favourite here, but for lovers of purer acoustics, ‘Daddy’s Little Girl’ will be the track that stands out; its scaled down voice and guitar leaves the performer’s soul bare as he recounts being separated from a loved one.

The title track fuses rock and roots in a way that allows for a very powerful performance. The way Stills reaches for higher registers against a sparse piano during the intro suggests something great is about to be heard, and once the rest of the band fall into place, it’s a work of wonder, with tough guitar chords counterbalanced by multi-tracked voices. The lead vocal leaves the most indelible mark of all, though and Chris’s howls, in particular, are another stark reminder of the circumstances in which this album was born. Since the main hook involves the couplet “together we’ll sink like a stone…open your eyes and you’re gone…”, there’s anger, sadness and unease vying for attention all at once and the melting pot of all three can be hard to swallow if approached in a wobbly mood. Like others before him, Stills shows that absolute brilliance can come from turmoil and it’s a track you won’t want to miss.

While the tones of Chris’s father hung in the air like a welcome spirit on ‘100 Year Thing’, they’re also present on The Weekend’, which sounds a bit like a lower key album track from one of Stephen’s 70s albums. Giving the stripped back style a tougher edge and an expletive driven frustrated edge, it stands proudly in the centre of a collection that’s already a whirlwind of conflicted emotions. Further echoes of that Chris’s debut album are found during ‘In The Meantime’, a moody and rigid workout that centres around a very full acoustic guitar sound and a vocal from a man who’s obviously between pillar and post, unhappy and reaching out. “In the meantime, what the hell am I supposed to do? / I’m still in love with you”, he cries, whilst musically the rigid backdrop refuses to offer any waves of consolation or caressing softness. It’s stark and bold, though since it’s presented without the kind of spite that drives Richard Thompson’s inner demons, it proves that pain can be shared without depressing or alienating the listener…

A long time coming, ‘Don’t Be Afraid’ is simply fantastic. It’s a collection that’s utterly unafraid to bare its sole to everyone; it isn’t just an album that needs to be heard, but listened to in the old fashioned end-to-end way. Only then can Stills’s various emotional tropes be fully appreciated. It’s his ‘Blood On The Tracks…his ‘Shoot Out The Lights’…except it could be better than both of those well worn classics. Big talk, maybe…but there’s no escaping the fact that on this album Stills has fully matured into an artist whom, in time, will now be recognised as one of the great songwriters of his generation.