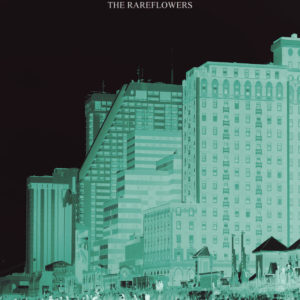 The opening number ‘Trip Into The Sun’ sets up The Rareflowers’ love of a mid-pace. With a steady beat, the band set about an arrangement that sounds like a typically woozy re-tread through 80s college rock and the guitars, in particular, come loaded with a sound that could have been copied from R.E.M.’s ‘Document’ album. In fact, there are echoes of the classic ‘The One I Love’ throughout, especially in the way the lead guitar cuts through with a huge twang. No other direct link with Georgia’s finest should be sought, though, especially considering the chosen lyric has none of the oblique sparkle of Stipe’s finest work. The lyrics are especially pedestrian – such a tune deserved more than a one-line chorus – but, that said, it’s hard to find fault with Jimmy’s lead vocal, bringing as he does a shimmering lightness to a solid performance. Musically, the verses set things up nicely but never seem overly confident, before a chorus breaks into something a little more buoyant, quickly suggesting bassist Kane Maraday is the band’s strongest musical link on this number. For first impressions, it’s okay; if you like light power pop or fairly straight jangle pop, there’s every chance you’ll take to this straight away, but throughout this particular track, there’s always a nagging feeling that The Rareflowers are capable of much more.

Luckily, the next two numbers really deliver on that feeling with a pair of fantastic jangling tunes, unafraid to fuse the summery with a woozy charm that more than occasionally taps into something dreamy. Lead single ‘New Generation’, especially, presents the band’s love of a retro jangle in a much better way. The main riff is lovely and direct; simple, melodic and with with Jimmy’s guitar work so often out front and centre, it’s as if traces of The House of Love were recycled through an American prism. This would be a great tune in an instant, but the way the band top the riff with a tinkling piano during the instrumental breaks really gives things an extra lift. Taking an almost mechanical beat and placing a huge twin guitar jangle over the top, ‘June’ is every bit as good, if not better, especially in the way The Rareflowers trade in the usual 60s vibes for something that could have been created in the 80s. Beneath the near relentless jangle, there’s a massive pop sensibility; in fact, there are various bits of this that could have been inspired by Aztec Camera and Haircut 100. It’s bridge sections, especially, point a huge finger at the more sophisticated pop of that era, with the rhythm section coming together to take the lead, while a guitar throws out pointed notes awaiting a glossy vocal’s return. In terms of The Rareflowers’ own twist on jangly alt-pop, this is easily the EP’s best track.

Finally, ‘Shake’ brings one final tiny twist, as it makes use of vocal filters to give everything some retro reverb. Quickly settling into their favourite mid pace, as before, Jimmy’s clean and ringing guitar sounds are hugely appealing and everything avoids becoming too ploddy thanks to a breezy vocal. From the outset, the typical jangle is tempered with a nod to the Gin Blossoms to create something very radio friendly, before the chorus reaches for something slightly punchier. Unfortunately, the chorus opts for the single line once more, but due to the strength in the overall arrangement, it just about gets away with huge amount of repetition. It could be accused of being overly simple, yes, and perhaps after ‘New Generation’ it doesn’t quite hit the mark, but for lovers of the style, there’s still a lot to enjoy here.

A couple of weaker choruses might miss the mark, but most of the arrangements on this EP are solid. That has a lot to do with The Rareflowers’ love of a retro sound and some great influences, of course, but in tunes like ‘June’ and ‘New Generation’ especially, they’re also able to serve up a couple of left-field summer gems in their own right. While not a classic, there’s more than enough appeal in this EP to reel in the more committed fans of a jangly and deliberately retro sound.