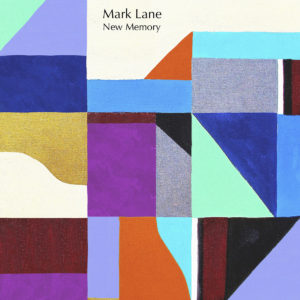 Mark Lane’s fourth album ‘New Memory’ continues the Californian singer-songwriter’s voyage down a rabbit hole of retro pop. So much so, that it’s hard to work out whether its title is meant to be ironic. These ten songs do not so much create things that’ll eventually become a new memory as delve into old musical memories and stir them up. To say that Lane’s work is often the sum of its many influences would be an understatement, but there’s no avoiding the fact that – assuming you like retro pop/rock with a heavy 70s bias – ‘New Memory’ is a thoroughly enjoyable record.

‘Takin That Ride’ is one of those numbers that wears its influences on its sleeve proudly and, as such, also gives a great indication of the sounds that fill the rest of the LP. The chords shimmer and chime like the best Teenage Fanclub and Big Star fare, but are lifted by a much more complex bassline, suggesting a little Flamin’ Groovies has also spent time on Lane’s turntable. Lane, meanwhile tops this very retro wall of sound with an equally throwback-ish vocal performance; it’s a little nasal in places, but really carries the spirit of lots of great 70s pop/rock. Trading in the chime for a piano based rumpty tumpty and a definite throwback to Lane’s ‘Something New’ album, ‘Something Grand’ moves forward with a lovely but simplistic early 70s pop melody that carries the core of Badfinger with a smidgeon of Harry Nilsson on its verses – something which, by turn, ends up not a million miles from works by the underrated retro tunesmith Jim Boggia. Moving from the verse to the chorus, the piano subsides and the earlier chiming guitars step up for something slightly Lennon-esque. Its two styles very much compliment each other and this would be an instant standout if not for one thing – it’s a mite too slow. Even so, there are the bones of something great here.

Piano fans might also find some joy within ‘After The Comma’, a very 70s fused piece that rolls around somewhere between AM radio pop and neo-pschedelia with an uneasy feel. Shifting from the McCartney styled jauntiness to something with a swirlier feel seems more sympathetic to the piano work, while a heavily reverbed guitar throwing out various distorted shapes really gives this track a hugely textured feel. Lane’s cheekiness as he attempts to rhyme doctor with helicopter is one of the number’s best quirks, while a thoughtful guitar solo shows how to fill several bars and utilise an old fashioned left/right stereo split without being flashy. Changing the mood again, ‘If You See The Girl’ applies a pop gift to a smooth piece of country pop, blending steel guitars with subtle piano and a whole blanket of acoustic guitars. Measured directly against the likes of ‘Something Grand’, it’s hard to know exactly where this came from, but it fits the mood of the album well and is a style that Lane slips into with ease. While musically solid, its unassuming feel allows for one of the album’s friendliest vocal takes, almost to the point where you’re able to forget that this is a sad tale of a love lost.

An album highlight, ‘Open Road’ dispenses with the more obvious power pop influences and finds teases with something much closer to southern rock. Maybe the road trip styled narrative inspired Lane to dig within himself for something more journeyman inspired; maybe the music came first and screamed for the heady good times a road trip can offer – only Lane knows – but what transpires is brilliant. A really optimistic, upbeat riff, twangy guitars and a solid rhythm section plough ahead; the guitars are cranked without being dominant, while a shuffling drum part constantly gives the feeling of motion. A multi-tracked vocal adds the pop to the southern groove and an intermittent lead guitar adds a melodic counterpoint. The fact that the bits between the verses sound very much like Duane Allman’s contributions to Derek & The Dominos makes a great track even greater…and the track bows out with a twin guitar frenzy that deftly pays homage to ‘Brothers & Sisters’ era Allman Brothers in fine style. Equally brilliant, Lane almost appears to be channelling Matthew Sweet and his mate, the criminally overlooked Pete Droge, on should’ve-been-hit-single ‘Greet The Day’. Unashamedly feel good rock/pop, there’s a really positive vibe that cuts through the middle of the track and in more than a few places, the overdriven guitar style could be a match for Sweet’s circa ‘In Reverse’. Sure, with its well crafted combo of chiming guitars and big hook, you’ve heard it all before from Big Star right through to Mike Viola, but it’s one of those numbers that takes something familiar to the next level; it would be a killer cut on a compilation or a day brightener if it appeared on your mp3 player’s playlist when set to random.

Pulling out the acoustic guitar for the title track, you’d be forgiven for thinking the track might be more introspective – ballady, even – but soon enough, a hard bassline anchors a rhythm (brilliantly played, too), before a world of electric guitars build up a wall of sound that’s a slower take on something from a Badfinger LP, or perhaps Matthew Sweet’s own take on such a sound. With a slight filter on his voice, Lane sounds perfectly at home within this mid-paced piece, and a subtle chorus hook soon presents itself as stronger than first suspected. Being somewhere between Matthew Sweet, Pete Droge and the wonderful Edward O’Connell, it adds nothing especially different to the record, but what it does, it does very well. Stretching out to a most unexpected six and a half minutes, ‘Goodbye’ is a moody, semi-acoustic and very confessional piece. It’s slow and almost druggy pace gives the vocal more room to move, but it’s the music that impresses the most of all. The multi-layered sound takes in elements of great late 60s pop – those with broad tastes will certainly hear beyond the more obvious Beatle-y bits (this sounds like a Harrison composition, especially by the time a lovely guitar solo cries forth) and find traces of their favourite underground psych practitioners, a touch of later period Hollies and – crossing the Atlantic and various decades – some of the more obviously country-psych moods explored by Pete Droge on his ‘Spacey & Shakin’ album of 1998 (which by the time of this release could also be legitimately called retro).

With no filler, this album clocks in at a classic “two sides of black plastic” forty four minutes – and given the chosen style, it’s only fitting it does so. ‘New Memories’ mightn’t always try and be too clever or even original, but if the classic power pop style is your bag, it’s one of those albums that you might love right from first listen.