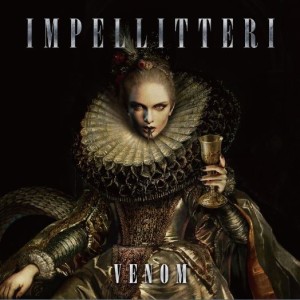 Impellitteri’s press department claims that this album was created to “impress every metal fan, every rock fan and musician around the world”.  That’s a really realistic goal!  They further this by claiming ‘Venom’ was designed as a record that would be “sonically pleasing to those usually turned off by metal…especially women”.  Those involved are either horribly deluded or perhaps think taking PR tips from Manowar’s Joey DiMaio is a good idea. Fact is, this album is so entrenched in metal (with a giant fucking capital M) – and often horribly dated styles of metal, at that – that it wouldn’t have the slightest chance of even possibly attracting a casual listener, let alone pleasing them. With songs that rarely pull back from being played at a hundred miles an hour while exploring every old-school scenario imaginable, for those not a hundred and eleven percent behind Impellitteri and their particular schtick, ‘Venom’ presents every reason for everyone – and women – to run for the hills.

In the past, the band have previously issued recordings with titles like ‘Grin & Bear It’, ‘Answer To The Master’, ‘Speed Demon’ and ‘Slay The Dragon’ (and many, many others culled from the Ladybird Book of Metal Songs); despite being recorded some thirty years after such titles were very much in vogue, ‘Venom’ doesn’t disappoint, bringing cliché after laughable cliché.   …And everything that’s bad/funny [delete as appropriate] about this is evident right from the start, as the title track begins with a multi-tracked widdle over which Rock screams “Are you ready? IT’S VENOM…VENOM!”   Increasing the pace to 80s thrash speed, the double bass drums are impressive, but sadly, almost everything topping that rhythm is just embarrassing in the extreme.  Chris’s lightning speed solo shows technical dexterity but absolutely no passion, while the bulk of the lyrics are purest Spinal Tap.   With a slightly deeper tone, ‘Empire of Lies’ suggests something a little better – and indeed the use of vocal harmonies on the chorus is a marked improvement – but any enjoyable moments are fleeting.  The howling clichés here revolve around “a king without a crown” and a falling empire, while Mr. Impellitteri’s preference of shred over emotion makes this sound like a second rate Yngwie workout.  Not terrible by any means, but it’s really not something you’d ever play in company.

During the giant power-fister ‘We Own The Night’, apparently the “band is rocking” and they’re gonna “tear up the whole town”.  They also suggest it’s “not possible to know without seeing the light”, but frankly, you could probably have a decent stab at guessing what this cliché riddled rocker sounds like without ever having to suffer the pain of actually listening to it.  Again, those who prefer speed over substance might marvel at the lead break, but technical ability never enough to make you forget truly appalling song writing.  ‘Nightmare’ spends most of its time sounding like a cast-off from Judas Priest’s 1990 thrasher ‘Painkiller’, with glimpses of melody cutting through the sheer speed and aggression.  Once again, of course, this is blighted by some genuinely awful lyrics – lyrics where the use of rhyming takes precedence over anything actually worthy in terms of storytelling or long-term memorability.  “Please end this nightmare…it’s my nightmare” screams Rob at full pelt, in a sentiment that might just strike a chord with most people. YES…PLEASE MAKE IT STOP.

With verses filled with meaty drum fills and a heavy bottom end and chug worthy of Symphony X, ‘Jehova’ could have been one of this discs best numbers.  In keeping with so much of the other material, though, the vocals and lyrics are an instant turn-off.  Choirs of vocals shriek “Jehova! Jehova!” while born-again Rock sings of “lifting up scriptures” and being “shown the way”.  This tale of leaving your tarnished soul behind and casting aside “lusting eyes”, makes Neal Morse and Michael Sweet seem somewhat casual in their sharing of beliefs.   The combo of unsubtle lyric and general bombast makes this track sound like something from Ayreon’s magical bin of musical theatre rejects.  The promising chug provides the core of ‘Rise’ a three minute metallic belter with Chris indulging in dirty downtune interspersed with impressive horsey squeals.  The rousing chorus imploring everyone to “rise to the challenge” actually manages to recycle a familiar theme without sounding too trite, before everything slows briefly for an enjoyable sludgy riff leading into a solo that has all of the usual dexterity, but also a greater importance of melody.  It’s still metal in a very old-school vein, but by some miracle, it’s a hundred times better than the rest of this disc.   Unfortunately, the increase in quality is brief; despite teasing with an Iron Maiden-esque intro, ‘Time Machine’ quickly becomes a full-on near one-pace thrashfest – all drums and shredding, no real charm – with a chorus that’s designed to induce cringing.   This would have been fairly embarrassing in 1985…thirty years on, as a stylistic choice, it’s just baffling.

‘Venom’ has been given a first rate production job (courtesy of the band themselves and Rob Reely) and as such, often sounds superb.  These ten tracks each sound crisp and powerful, having been afforded the kind of send off that huge metal riffs always deserve.  It’s such a shame that the bulk of the material is so laughably bad – if this was supposed to be funny, then it’s an instant classic.